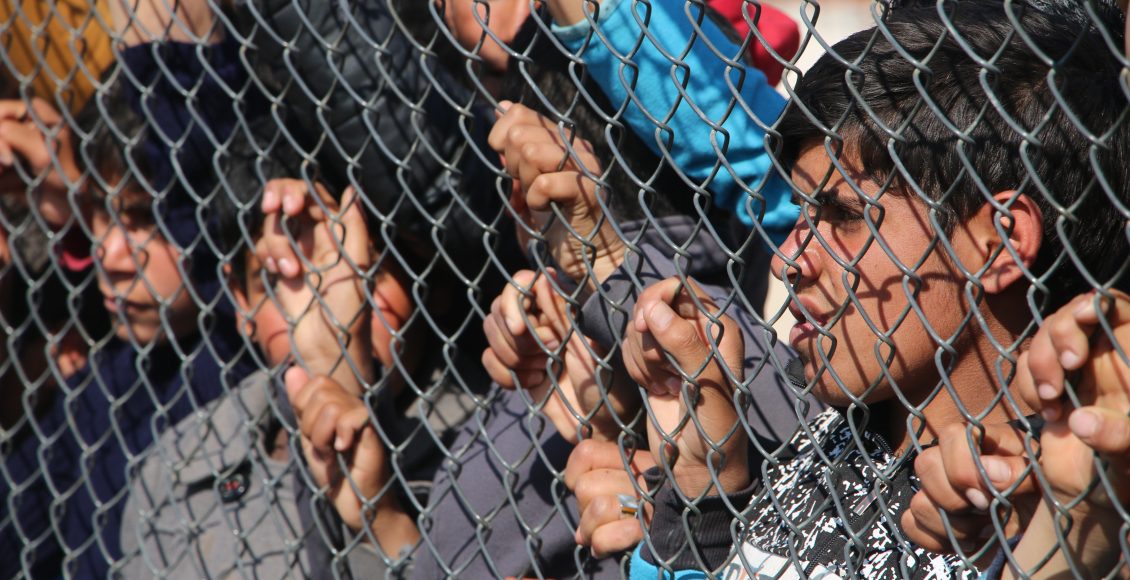 Until the end of 2014, the small villages in Northern al-Bab in the Aleppo countryside had been completely left out of the different belligerents’ battle plans. The opposition was using a 180-km long road through this region for logistical purposes, but these villages were not ruled by any group. Occasionally some places were used by opposition factions as crossing points for supplies coming from Idlib to Eastern Aleppo.

However, in late 2014, came a wave of masked “scary-looking” men wearing long pieces of clothing, waving black flags and chanting religious slogans. As these men entered one village with their vehicles, clamoring “Allah Akbar”, Fatima’s three children ran toward her in celebration thinking that it was Eid, as “Allah Akbar” is only ever heard during the two Eids (Fitr and Adha) in the village.

Fatima (40 years old) had escaped from the shelling and airstrikes conducted by Assad’s troops on her neighborhood in Aleppo to the village of al-Kassara in northern al-Bab, along with her husband (55) and 3 children (a boy aged 10, and two girls aged 6 and 3).

Back in Aleppo, they used to rent a house near the al-Haydariya roundabout, which was the site of two deadly airstrikes launched by the regime’s air force, in late 2012 and late 2013. During the second one, Fatima saw flying body parts as she walked through the neighbourhood. One day, she stepped on something soft and looked down only to see that it was what appeared to be a man’s arm. It had flown for more than 50 metres away from the site of the airstrike.

Horrified by the scale of the massacre, Fatima fled Aleppo to al-Kassara where she had relatives. But when Daesh entered this small Kurdish village of 40 houses, Fatima’s life took a turn for the worse. She was the head of her household, as her husband was bed-ridden. She knew she would be held responsible for any violation of Daesh’s rules on the part of her family.

Fatima, who now lives in a refugee camp in the Kurdistan region of Iraq, says that Daesh “wasn’t so bad in the early days.” They would even provide assistance for the needy and deliver aid. They tried soft measures to gain information about those in the village who supported the “atheists”. “I didn’t know what the word meant at first, but I later understood they meant Kurdish parties”, she adds.

There weren’t many men left in the village. Most of them had either fled to Turkey or Kurdistan, and half of the families who lived in the village were IDPs from other areas. Fatima shared a room with another family in the village’s school which had been shut down because there were no more teachers left. Until then, it had been easy for her family to receive aid given that the school was where aid was distributed to the people.

The first changes to the villagers’ lifestyle involved wearing thick black clothes and experiencing gradual restrictions on the movement of women. At first, Daesh was just giving verbal warnings. They warned that women should not venture out on their own and demanded that they be escorted by an adult male. Given that there weren’t many men left in the village, a boy, however young, would do. 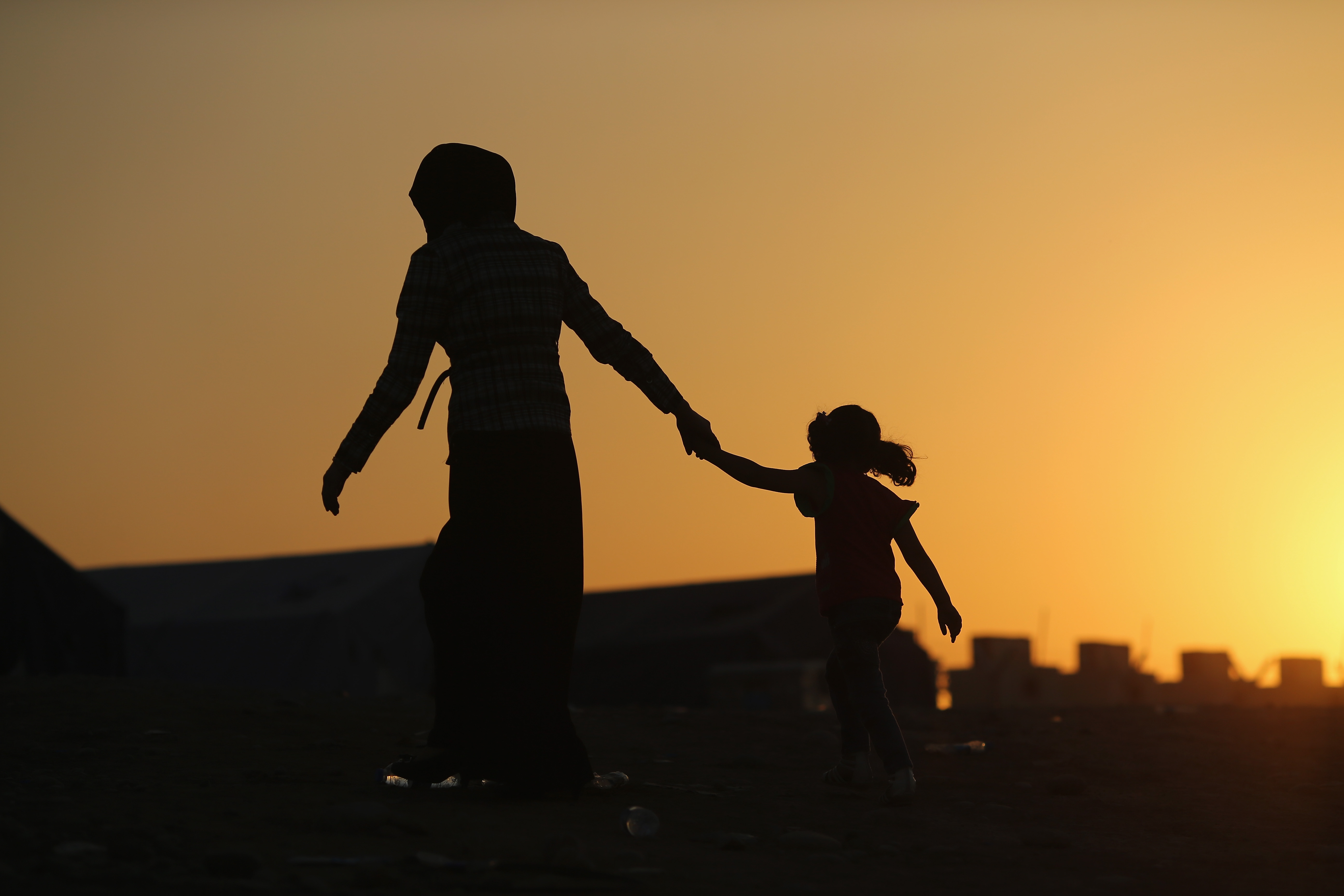 Daesh asked the families who lived in the school to move into empty houses, and if there weren’t enough, they would have move in with other families. Fatima objected. She tried to reason with them, saying that they were used to living in the school, that it had more than seven rooms and a spacious playground. However, she was told that the school would be turned into a sharia teaching centre and that all families had to vacate the premises.

People tried to cope with Daesh’s enforced way of life, but many families preferred to leave to other areas.

One incident in particular changed Fatima’s mind about staying in the village and convinced her that she or her family would never be safe as long as Daesh were in Syria.

When she was ordered by Daesh to leave the school, she had to move in with other relatives. This meant having eight children in the same house. She knew full well that she wouldn’t be able to control all of them all the time. One day, her six-year-old daughter was naked, as children often are, and tried to go outside. Fatima saw her and ran to get her back inside. Even though the girl had only been outside for mere seconds, a Daesh fighter had spotted her.

Minutes later, a member of Daesh came to ask for the child’s minder. Fatima covered her hair, put a black garment on and spoke to man through the closed door. She said that the girl’s father was a sick man and that she was responsible for the child. The man from Daesh warned that next time, if this were to happen again, there would be terrible consequences.

Fatima understood that when Daesh overlooked a “violation” of their rules, they usually wanted something in return. Indeed, two days later, two Daesh fighters came to the door and asked Fatima to send her 10-year-old boy to their religious school. She had no choice but to send him.

Fatima says she knew Daesh saw men and women as “useless people and hopeless cases”, “they did not trust us even if we abided by their strict rules,” according to her. She adds: “Their project was to win the children over, and to an extent, they succeeded: a few weeks after he had started going to Daesh’s religious teachings, my son called me hypocrite!” When Fatima asked her boy for an explanation, he replied that “obeying parents who are on the wrong [religious] path is haram (forbidden/ un-Islamic).”

Fatima was concerned about the gradual changes she saw in her son. She started thinking of ways of stopping him from going to Daesh, so she sent him to help his uncle in the fields.

She was certain that her son would tell Daesh about her plans and feared they would punish her for that. A few days later, her fears were confirmed. her daughter went to the door again, this time wearing a long dress, but failing to cover her feet. Without fail, a member of Daesh knocked on the door soon after and asked to see Fatima. He scorned her for letting the child outside “without any clothes on”, and asked her to stay at home until he would send for her.

A couple of hours later, two women came to take Fatima to Daesh’s local. There weren’t any women working for Daesh in the village, even the wives of Daesh fighters stayed in their recently acquired homes; therefore, these two women must have come from al-Bab, specifically sent to deliver Fatima’s punishment.

Fatima was confused. She felt scared and awkward when one of the two women brought her nose close to her mouth “to smell [her] breath and see if [she] had smoked.”

The two women took her clothes off and proceeded to lash her. Twenty lashes were enough to fill the air with Fatima’s screams. “Each lash felt like they were tearing away my soul, and they were hitting me with all their spite”, Fatima painfully recalls.

When the lashing was over, Fatima was dragged by her hair to the next room, she was offered a new niqab (black all-body covering garment), and was told by one of the two women “All kids belong to Daesh, do you understand?”

Fatima looked at her, smiled and said: “all kids belong to Daesh? God is everlasting.”

A few days later, Fatima escaped to al-Qamishly with her family, and from there to Kurdistan. “I have won the future of my children,” she says.

VIDEO: RAMADAN IN LIBERATED AREAS, THE VOICE OF THE POPULATION – JARABLUS