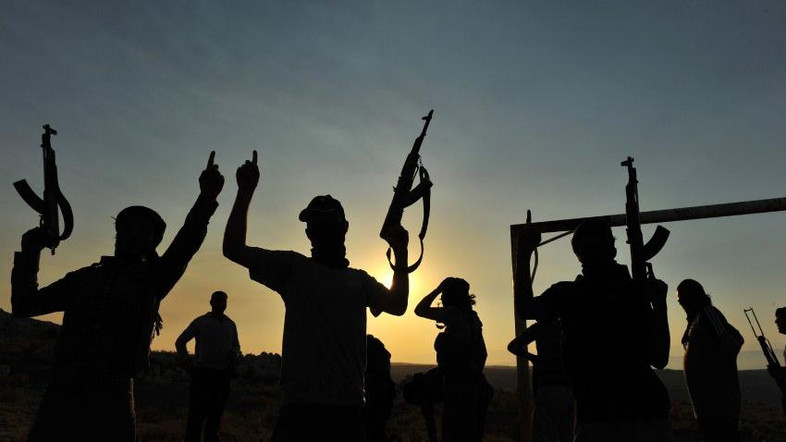 Members of Jihadist group Hamza Abdualmuttalib train near Aleppo on July 19, 2012. Rebels seized control of all of Syria's border crossings with Iraq on July 19, dealing a new blow to President Bashar al-Assad, as China and Russia dismayed the West by blocking UN action against his regime. AFP PHOTO/BULENT KILIC

The Coalition is continuously enhancing security measures to stop and intercept foreign terrorist fighters at airports and other border crossing points. Last summer, for example, the US Department of Homeland Security (DHS) required enhanced screening at certain overseas airports with direct flights to the United States. Currently there are 14 North African and Middle Eastern last point of departure (LPD) airports with direct flights to the United States required to comply with threat based security. All European Union (EU) countries have adopted the enhanced screening requirements. DHS has also shared best practices, tools, and programs with foreign partners from Europe to Asia to Africa to help address the challenges posed by porous borders in detecting foreign terrorist fighter travel.

Domestically, since 2014, the Department of Justice and the FBI have arrested 65 individuals in Daesh-related matters and since the White House Summit on Countering Violent Extremism (CVE) last February, the United States has strengthened our efforts to prevent extremists from radicalising and mobilising recruits. The CVE Task Force, announced in January 2016, will be a permanent interagency task force hosted by the Department of Homeland Security (DHS) with overall leadership provided by DHS and the Department of Justice, with additional staffing provided by representatives from the Federal Bureau of Investigation, National Counterterrorism Center, and other supporting departments and agencies. The CVE Task Force will: (i) integrate whole-of-government CVE programs and activities, (ii) leverage new CVE efforts, (iii) conduct ongoing strategic planning, and (iv) assess and evaluate CVE programs and activities. The DHS Office for Community Partnerships continues to find innovative ways to support communities that seek to discourage violent extremism and undercut terrorist narratives.

The growth of the Coalition

Medical Centres are back in the Aleppo countryside