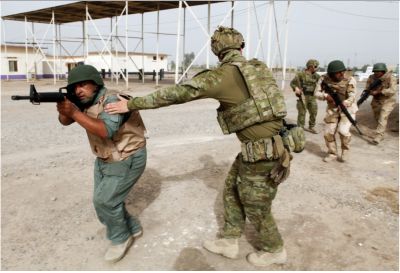 Daesh poses a serious threat to security and stability in the Middle East and directly affects the security of Australians at home and in the Indo-Pacific region. Since late 2014 there have been three terrorist attacks in Australia and in each case the attacker claimed allegiance to or was inspired by Daesh.  Thanks to the vigilance of Australian security forces, a dozen other attacks have been disrupted.

In order to defeat this despotic and barbaric terrorist organisation Australia is working closely with partners to destroy it at its core – its so-called “caliphate” in Syria and Iraq.  It is vital to destroy Daesh’s pretensions of statehood.

Australia is a significant military contributor to coalition efforts on the ground in Iraq and to the coalition air campaign.  Three hundred Australian Defence Force troops, working with New Zealand forces at Taji, have trained more than 17,000 Iraqi forces, building their capacity to retake areas from Daesh and to take control of Iraq’s security. An Australian Special Operations Task Group is providing advice and assistance to the Iraqi Counter-Terrorism Service as it plays its vital role in the Mosul offensive.  And an Australian Air Task Group is conducting airstrikes against Daesh targets in Iraq and eastern Syria, as well as providing enabling support to other coalition partners.

Australia is also working closely with coalition partners to combat Daesh through other means.  Australia is a member of all four coalition working groups (counter-messaging, counter-finance, foreign terrorist fighters and stabilisation).

For example, Australia’s financial intelligence agency, AUSTRAC, works with its counterparts to undertake preventative actions.  It tracks and combats terrorist financing to help stop the funding of attacks and operations.  Australia is leading work in the coalition on countering Daesh financing in the Asia-Pacific region, including through technical assistance and training.

The online environment is being exploited by violent extremists to spread their propaganda and recruit others.  Australia is working with communities and families to increase awareness of online radicalisation, including through innovative online resources.  The Australian Government is also working with digital industry and regulatory and operational agencies to take down violent extremist material.