Najla Imad is 14 and from Diyala in Iraq. Despite her age, she is already a local, regional and provincial table tennis champion. 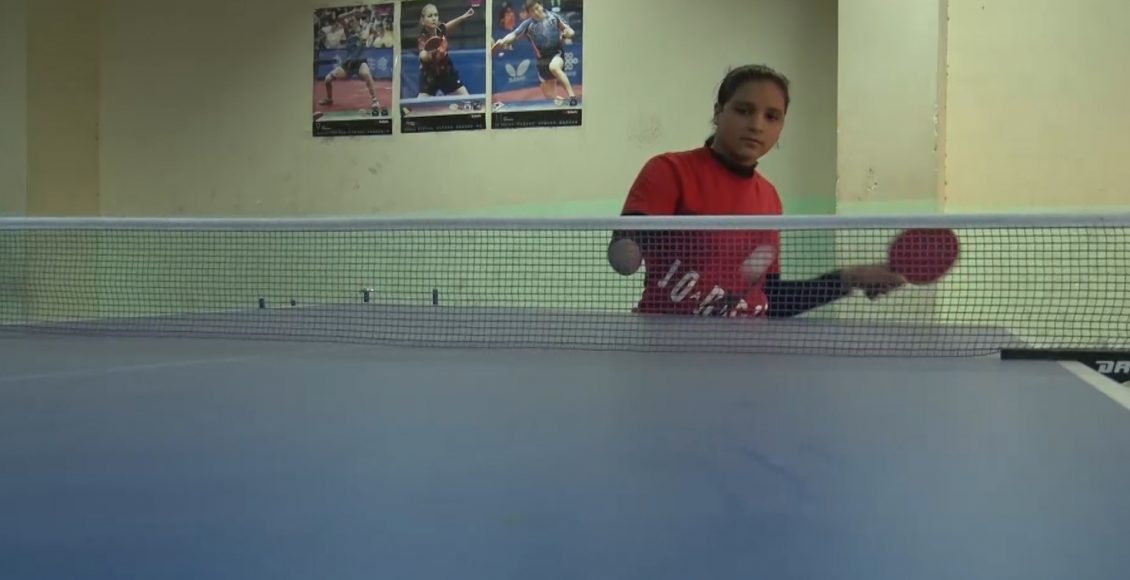 Najla Imad is 14 and from Diyala in Iraq. Despite her age, she is already a local, regional and provincial table tennis champion.

Daesh’s occupation of Diyala did not stop her from continuing her passion and she sees sport as a vital tool for resisting extremism.

“I really like this sport,” says Najla. “My dad saw me play and he got me into a sports club so I could practise daily. I would play my brothers and win.”

Najla, who wears  the same colours as the Iraq national team – green – is one of the country’s top young table tennis talents. She practices obsessively and is reaping the rewards of  dedication to her craft.

Even more remarkable is that fact that Najla is without three of her limbs, after being caught in a roadside bomb in 2007. She has worked hard to ensure that her disability would not be the most significant aspect of her life.

“I consider myself a lucky child,” she says. “My mother and father provide everything for me, so I don’t feel like I am missing anything.”

While her disability never stopped her competing, and winning, at table tennis, Daesh and its occupation of territory in Diyala did.

“During the war with Daesh, life was difficult, due to fear and worry,” Najla says. “The roads were closed, which affected my ability to go to the sports club or to attend sports events in Baghdad.”

Almost all the people in Daesh controlled areas were impacted by the barbarity and cruelty of the terrorist organisation and life for Najla was no different. For women it was particularly tough. They very rarely left their homes. When they did, they had to be accompanied by a male relative. All sense of autonomy had gone.

“After Diyala was liberated, everything was good and we were happy,” she says. “Sports events and championships were held in the province again. I got to meet sports players from other provinces and towns that had been under Daesh control.”

Sport, Najla believes, is a way to connect people and empower women. More than that, it can undermine extremism.

“The ideology of extremism opposes sports, especially for women,” she says. “The more people take part in sports and get involved, the better we can resist radicalism.”

Having lived under, and survived, Daesh rule, Najla has a bravery unusual for someone her age.

“I cannot think of something I am afraid of because I was together with my family and we overcame the effects of Daesh,” she says. “I continued to study and I became an athletic champion, so I am not afraid of anything. I am not even afraid of losing! It just drives me to win.”

What’s next for Najla?  Competing at table tennis continues. And later, she sees herself in a legal career, hoping to become a judge “so that I can defend those who were wronged,” she says.

And she has a message for those who might pity her.

“If you see Najla, don’t feel sorry for her and say “poor thing”. Let others know that in five years I was able to become the youngest champion in the Asian continent.”

“I went on the first tank that returned to Al Alam when it was liberated.” Meet Um…