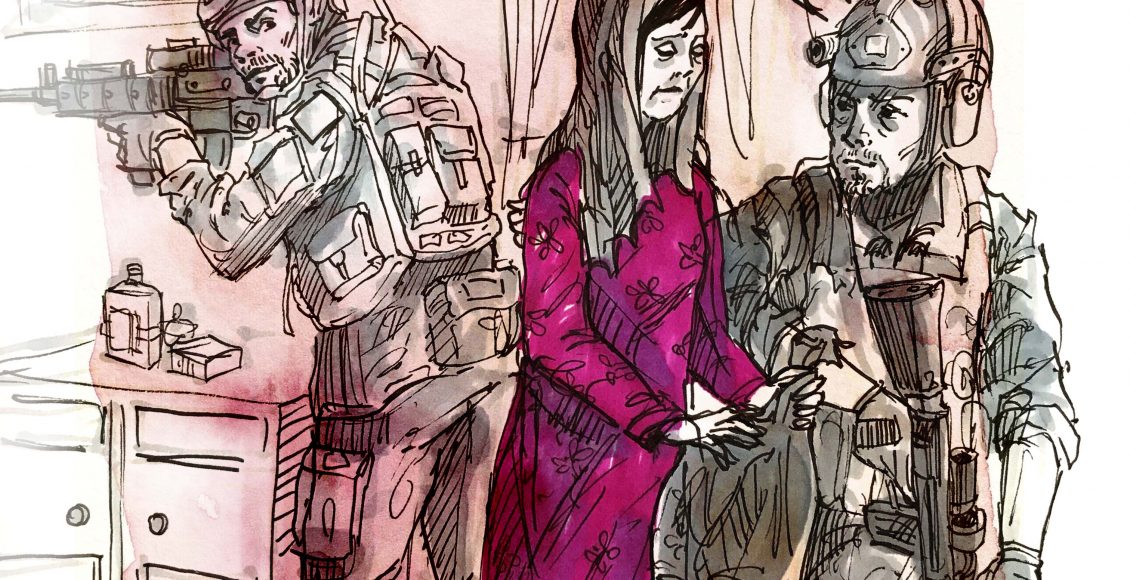 In one house, six families waited to be rescued. They stayed put, hesitating over whether to follow the Daesh fighters into the heart of the city or to try to escape towards the SDF lines.

Fifty-seven year-old Maryam al-Ghanami was part of the group.

“Everyone was afraid of moving in any direction,” she says. “Because if they moved into the inner neighborhoods of the city, they’d be faced with the same dilemma again in a few days as the frontline continued to press inward.”

Making a run for it toward the SDF was out of the question too. Doing so would mean certain death at the hands of Daesh snipers who lurk and target fleeing civilians.

Maryam, along with her remaining family (her son and his wife, and her two grandsons), saw SDF fighters approaching the house. They shouted to identify themselves,  afraid they might be mistaken for Daesh suicide attackers.

Maryam felt uneasy, unsure how they would be treated, as civilians in Raqqa were bombarded daily by Daesh propaganda portraying the SDF as killers out to murder ethnic Arabs.

The group that approached them immediately tried to help them to safety and reassured them they would be well treated. At once the six families were given water and moved away from the danger of the frontline. The rescued civilians asked if they could move to a village west of Raqqa. After a routine check, they were allowed to.

Maryam and her family are currently staying at a relative’s in the village on the banks of Euphrates. Now she can think about what she lost in the 3 years of Daesh rule. Her 24-year-old boy; her 17-year-old daughter.

The boy was killed during the chaos that followed Daesh’s takeover of the city, when dozens of people lost their lives. Her daughter was also killed, but Maryam does not have the strength to tell the full story. She says only that her daughter, Hanan, was kidnapped by a Daesh foreign fighter – and that a few days later Daesh security told her to come and take her daughter’s dead body.

Maryam weeps, buries her face in her palms. Her few words can barely be heard,

“They took my little baby from me,” she says, in a sorrowful voice.

Despite everything, there is still hope. Her city will need a lot of help. In addition to the destruction left behind by Daesh, the war has changed the city beyond recognition.

“This will all need rebuilding. We’re tired of war. We just want peace,” Maryam says.

How to rebuild the city?

Maryam has not been to school her entire life and does not know how to read and write. She led a very simple rural life until she married her husband, also from Raqqa’s countryside. The couple moved to the city, where they tried to build a life for themselves.

“All the people of Raqqa have their roots in the countryside,” she says. “Back then, even Raqqa was more of a rural town, with just one very modest hostel.”

The sense of community, strong social bonds and hospitality of Raqqawis did not give much opportunity for hotels or accommodation businesses to thrive. Only since the dawn of the new millennium have even a few hotels appeared in the city.

Maryam sees the strong sense of community among Raqqawi people as an asset in rebuilding the city quickly after Daesh. Still, she worries about how the city will deal with the fact that some from the city joined the terror group.

One thing seems to reassure her about prospects for Raqqa’s future – the desire of Raqqawis to move on; and she remains hopeful that peace and justice will replace any feelings of retribution.

“I will remain loyal to Raqqa”

Daesh used schools in Raqqa as barracks, depriving children of education for the entire three years of extremist rule. Maryam’s two grandchildren need tutoring but she is unable to send them to school.

She shares her wishes that the new Raqqa Civilian Council will actively rebuild the city and deliver essential services. Rumours of the Global Coalition’s intention to support the city after Daesh keep her hopeful.

When asked what she can give to Raqqa, Maryam smiles.

“What can an old woman give to a city but a promise to stay through good and bad, remain loyal and help bring it back from the ruins,” she declares.

Once Maryam got to the village where she lives now, she immediately bought new traditional clothes.

“Daesh forbade us from wearing our traditional colorful clothes. My body yearned for them,” she says smiling, showing the traditional tattoos that sit proudly on her uncovered face.

She recounts how she once left her house uncovered as she hunted her two grandchildren who had managed to get outside. Worried for their safety, she raced into the street uncovered where a Daesh female police officer spotted her immediately.

Because she is older she avoided a severe beating but still suffered the indignity of being slapped in the street.

With these brief details of her past life, a stark difference can be seen in the life Maryam has now. Though her house how is very humble, her spirit is free.

Maryam does not feel like a stranger in this new place. According to her, it’s all part of Raqqa and she is hopeful and defiant about a coming end to the current hard times.

“The dark and black veil of Daesh will be removed, and the beautiful face of Raqqa will very soon be uncovered for the whole world to see.”

How do the residents of Nineveh Governorate feel about the security situation?