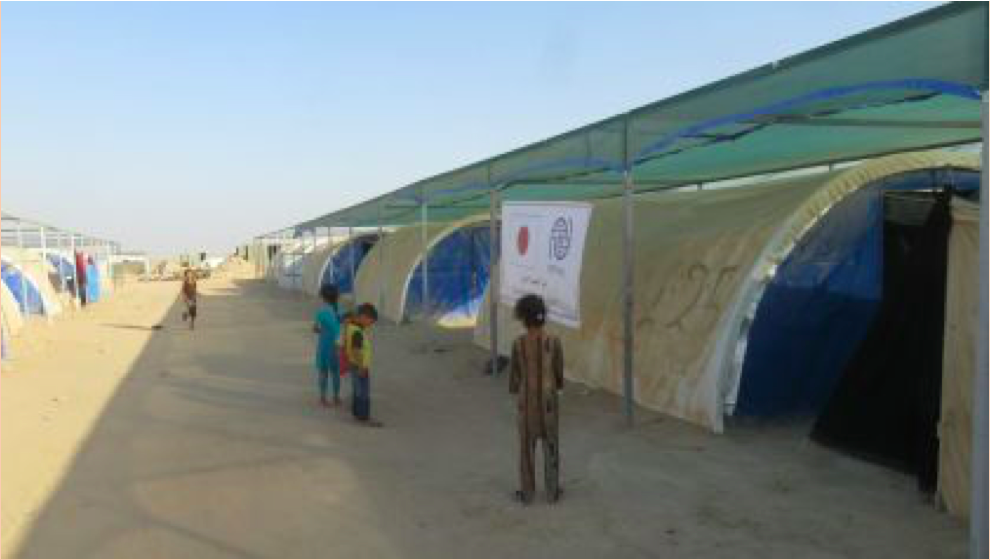 Many of the families in Amiriyat Al-Fallujah camps were displaced in May and June 2016, when more than 85,300 individuals fled from the city of Fallujah as a result of military operations to retake the city.

The project, which runs from August to December 2016, will provide an estimated 13,000 people living in eight camps in Amiriyat Al-Fallujah with shelter shading kits, which increases the life span of the government-issued tents by protecting them from the intense summer sun and winter rains. Half of the designated shelters have been equipped with shading, and work is underway to fit the other half before winter starts.

Residents at four of the camps (6,000 people) will also benefit from camp coordination and camp management services, including: technical skill transfer on care and maintenance, awareness-raising activities, and equipment to carry out management activities.

Training will be provided for camp managers on the importance of including camp residents in the decision making process, fostering community structures, and developing and implementing feedback mechanisms for residents.

The Japan-funded CCCM services will also directly benefit camp residents by providing cash for work opportunities that will employ residents to maintain the camp’s infrastructure, such as drainage systems, roads, lighting and latrines.

Other services will include awareness-raising campaigns on issues ranging from health precautions, maintaining shelter materials and information on safety hazards. The latter will involve the distribution of material on fire safety, which is particularly important to camp safety as people begin to use heaters with the dropping winter temperatures.

Abu Wisam, 63 years old, lives in a camp for displaced Iraqis with his wife, parents, two adult sons, and his four young children.  They were displaced from their home in the outskirts of the city of Fallujah in June 2016.

“I am a herdsman. We fled our home when fighting approached our area, and have been here for four months.  We want to return home, but our area has not yet been cleared by authorities. We hope to return home soon so we can rebuild our farm and lives. Shading was recently installed above our tent. We felt a big difference inside the tent afterwards, as we used to suffer from the high temperatures.”

Ambassador of Japan in Iraq Fumio Iwai said: “It is our pleasure that Japan has been helping our friends in Iraq. We appreciate IOM’s effort to mitigate the suffering of Iraqis and improve their living conditions.

IOM Iraq Chief of Mission Thomas Weiss said: “IOM is pleased to receive support from the Government of Japan to provide shelter assistance to displaced Iraqis in Anbar. These families are extremely vulnerable, especially when resources are limited and they are exposed to harsh weather conditions. In cooperation with humanitarian partners, IOM Iraq will continue to provide essential shelter and camp management support for displaced Iraqis.”