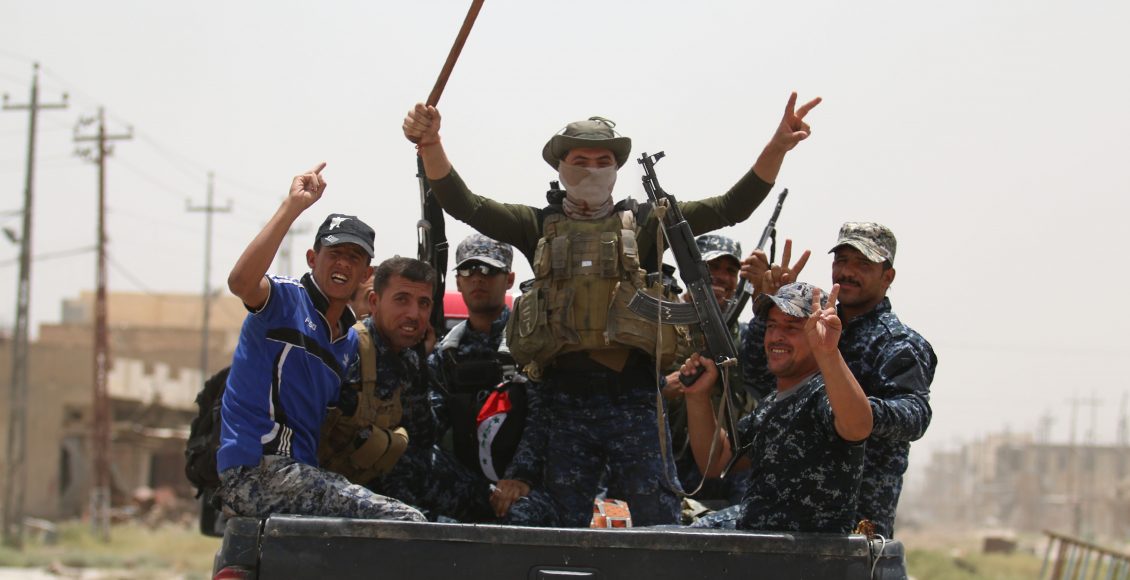 Members of the Iraqi police forces raise weapons and flash the V-sign for "victory" as they patrol a street in Fallujah on June 28, 2016, after Iraqi forces retook the city from the Islamic State group. - Iraqi forces took the Islamic State group's last positions in Fallujah on June 26, 2016, establishing full control over one of the jihadists' most emblematic bastions after a month-long operation. (Photo by HAIDAR MOHAMMED ALI / AFP)

“The Global Coalition continues to provide support through strikes, intelligence and advice and assistance to the Iraqi Security Forces operating in Fallujah,” he said.

“We will continue to do so through deliberate clearing operations.”

“This has been a difficult fight and we believe there is a lot of work to do before the people of Fallujah can return to their homes.  Definite progress, however, has been made in reclaiming territory and degrading Daesh,” he said.

“We believe we are seeing Daesh’s fighters suffering from degraded morale, internal chaos, and organisational confusion.  Daesh is struggling to pay its fighters and there seems to be paranoia in the ranks.”

The 66 international partners in the Global Coalition are united in the long term goal of degrading and ultimately defeating Daesh.

Daesh has lost more than 40 per cent of the territory it once held in Iraq. Thousands of people have been freed from Daesh’s rule.

In the last six months, Daesh have lost control of Hit, Rutbah and Ramadi in Iraq, and the strategic Tishreen Dam and their former stronghold of Al-Shadadi in Syria.

Over 725,000 Internally Displaced Persons have returned to their homes in Iraq due to stabilisation efforts that the 66 nations in the Global Coalition help to fund.

More than 25,000 Daesh fighters have now been killed.

Asmaa from Mosul, demining to save lives

See how you can help Take Terror Down