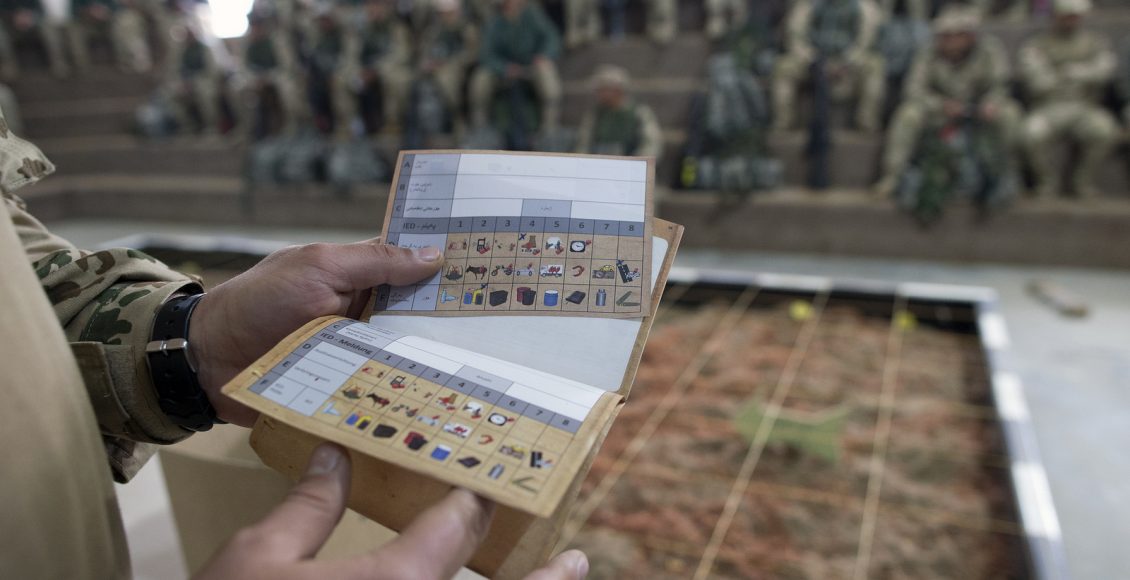 However, even when Daesh have been driven out of an area they leave a deadly legacy of homemade improvised explosive devices (IEDs), often cruelly disguised as toys, playing cards and watches in order to maim and kill families returning home. These gruesome tactics have been used in Ramadi, Fallujah, Kharam, Shirqat – and they are now being seen in Mosul as well.

To combat these tactics the Global Coalition is committed to clearing liberated areas of explosive devices, and training Iraqi forces and civilians to be able to identify the dangers of IEDs.  Traditional demining efforts have focused on searching the ground. With Daesh’s sadistic objective of causing the maximum amount of civilian casualties as possible this has led to new challenges in demining.  Mine experts must now be aware of the full environment, scanning every corner of homes, hospitals and schools, as Daesh seek to booby-trap cupboards, light switches, and even household objects like vaccum cleaners.

Clearance takes time – one wrong footstep could mean death – but each day, dedicated Iraqi Security Forces personnel place the safety of civilians above their own to clear hospitals, schools and homes. This work is critical – the rebuilding of infrastructure, such as water and electricity supplies, is wholly dependent upon it and the importance of this is not lost on those who carry out this painstaking work.

Alongside clearance, training is paramount. The UK, on behalf of the Global Coalition, is leading counter-IED training for Iraqi Security Forces, in conjunction with the UN Mine Action Service (UNMAS). UNMAS is also educating returning families on the dangers of IEDs and how to recognise them. To date, UNMAS has received $44.9 million in funding from Coalition partners, including Australia, Canada, Denmark, Estonia, European Union, Finland, Italy, Japan, the Republic of Korea, the Netherlands and the UK. The funding has resulted in 24 tonnes of explosives being cleared by UNMAS in Anbar province, Iraq.

Coalition partner the Netherlands has pledged to invest a further €11 million to support de-mining projects in Iraq between 2016 and 2020. Through their partners, Handicap International and Mines Advisory Group, Dutch support so far has provided training to 141,185 people on the risks of IEDs, cleared over two million square metres of land and assisted 2,278 victims of explosive remnants of war. Another Coalition partner, Japan, has renewed its commitment to demining and stabilisation in Iraq with a donation of $4,347,100 to UNMAS, announced on 31 March 2017.

The Finnish Government, another Coalition member, is working in partnership with the Mines Advisory Group’s (MAG) and has committed €3 million between 2017 and 2020. The aim of this funding is to increase the personal safety and security of those returning to their homes in areas liberated from Daesh, by making them aware of the risks of explosive devices, and how to spot them.

These significant investments from Coalition partners demonstrate our united commitment to support the Iraqi Government in tackling the deadly reminders left by Daesh in areas they once controlled.

We have always been clear that the operation to defeat Daesh will not end with a military victory –   hard work will need to continue to ensure every Iraqi family can return home, and the removal of explosive devices is a key part of that.  The Global Coalition remains committed to assisting in this area, and will continue to train Iraqi Security Forces so that they can take the lead in building a strong and stable Iraq.

For more on Coalition efforts to combat explosive devices, visit our image gallery by clicking here

A year since Mosul liberation