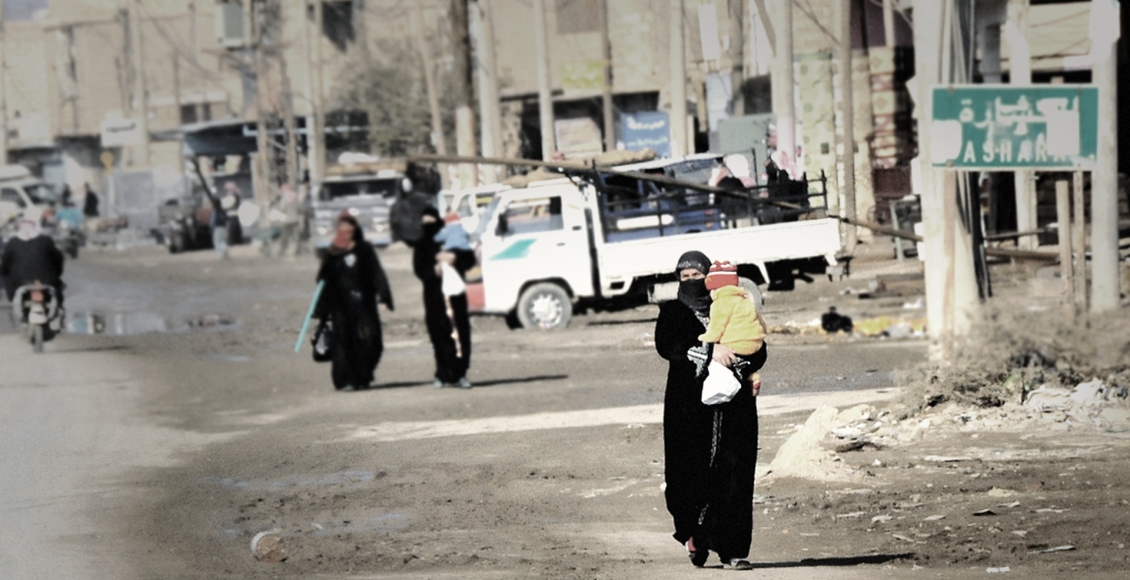 A year before the Syrian crisis started, Widad used to study Arabic literature at the Furat University in Dayr az-Zor. It was during this time that she met Tammam, a young man taking the same course as her. The couple grew fond of one another, but their relationship saw their home province go through dramatic changes. Between 2011 and 2014, several groups clashed and fought to gain control of the area: first the regime, then militias of the Free Syrian Army (FSA), the group then known as the al-Nusra Front (Hayat Tahrir as-Sham since 2017), and finally Daesh.

In early 2011, the couple got engaged and agreed to get married in the summer after graduating, but politics and war got in the way. When protests against the regime of Bashar al Assad started in Dayr az-Zor, Tammam and Widad were amongst the first to join. But freedom was short-lived and their early involvement in the revolution led to Tammam’s arrest and torture by security forces. He survived and was released 6 months later, but almost paralysed. Despite Tammam’s life-changing injuries, the couple decided to get married, reassured by physicians that his wounds could be treated with prolonged physical therapy. A year after getting married, they had a daughter who they decided to name “Suriya”, as the Arabic name of Syria.

However, the conflict quickly intensified, and opposition factions started taking control of Dayr az-Zor. The couple decided to leave the city, right in the middle of the clashes and fled to Muhasan, a town in the countryside. As Muhasan was under opposition control, Tammam was convinced by one of the groups to work in their media office as he was an Arabic language graduate. Tammam accepted the job, despite Widad’s concerns that his involvement with the opposition might jeopardise them in the future.

In 2014, most of Dayr az-Zor fell under Daesh control and things took a violent turn. Dead bodies started piling up in the streets as raids and violence were rife and a state of hysteria gripped the countryside.

Tammam managed to escape and to survive Daesh’s beheading campaign against anyone opposing their rule, but left his wife and daughter behind. He travelled hundreds of kilometres from Dayr az-Zor to Raqqa, sometimes on foot, sometimes hitching a ride from passing vehicles. He had lost all contact with his Widad but when he finally arrived in Idlib, he was told by somebody else who had fled Muhasan that his wife and daughter had been captured by Daesh. They were accused by the organisation of being related to an “apostate”, someone who had left Islam.

Widad spent nearly a month in prison, where she was at the mercy of Daesh’s female prison guards. They tortured her to get her to reveal the whereabouts of her husband. They also separated her from her baby for a week and put the one-year-old in a nearby cell so that Widad could hear her crying from being left undernourished. One female guard told her: “this baby shouldn’t be raised by apostates!”

When the guards saw remnants of nail polish on Widad’s finger nails, she was whipped. The punishment for using nail polish usually consists of receiving 20 to  40 lashes, or the “biting” punishment, where a metal instrument is used to clip a woman’s flesh either on her hands or breasts. Widad was lucky in that she was “only” whipped, not “bitten”. A few days later, a woman was brought to one of the cells in the basement as punishment for dying her hair and not properly covering it in the street. One of the female guards brought her in and cut her hair in a horrendous way but the woman stood up to the guards in defiance. She was then given the choice of her punishment: whipping, or “biting”. The woman misunderstood what biting meant, thinking one of the female guards would simply bite on her hands or breasts. As this felt easier than whipping to her, she chose to be “bitten”. Widad talks of screams she had never heard before that episode. As a deterrent, female guards made sure other inmates saw the torture marks they were inflicting on their victims. The woman was brought in before Widad so she could see the deep bleeding wounds left in the woman’s breast.

During her time in prison, Widad heard tens of stories linked to the arrest of other women. One such story was that of a woman whose husband, a Daesh fighter, brought her in so she could be “disciplined”.

This woman told Widad about how her husband came back from fighting one night. She was already in bed as it was late. Although she heard him enter the room, she pretended to be still asleep. As he lied down next to her, the woman’s husband started cuddling her. She responded by moving her body closer to his. This behaviour made the husband furious: he accused her of either having pretended to be asleep or of being the kind of women who cuddles the first stranger to enter the room. So, he brought her to prison. Her punishment would be to clean all dirty prison cells and toilets, every day.

A month later, Widad and her baby were released, devastated and traumatised. She still didn’t know anything about her husband at that stage. As it turns out, Tammam had crossed safely over to Turkey and settled in Gaziantep. Widad decided to flee Daesh’s territory to find him. This wouldn’t be an easy enterprise as Daesh prevents civilians from leaving, unless they can secure a permission from their “emir”.

She decided to use trafficking routes instead, paying 500 USD (a small fortune in Syria) for her escape. Even though the smuggler used deserted areas, they were captured. Widad ended up back in prison again but was quickly released after promising never to leave again.

Meanwhile, a man from Muhasan who had managed to flee to Turkey told Tammam about the horrible things Widad had endured. After almost five months of having lost contact, the couple managed to get back in touch. Using a more experienced smuggler, they planned Widad’s escape, first from Dayr az-Zor to Idlib and then to Gaziantep. The cost was steep: the smuggler asked for 1,000 USD, a considerable sum for Tammam who was barely able to survive on his own in a foreign city. However, the smuggler was true to his word and managed to extract Widad and the baby from the terror of Dayr az-Zor, through Aleppo’s western countryside. After changing cars and taking a road through the desert, they finally reached Idlib. By then, only a few kilometres stood between Widad and her husband after nine months of separation.

A few days and several difficulties later, Widad arrived in Reyhanli, a small Turkish town on the border between Syria and Turkey, where her Tammam was waiting for them. They hugged and kissed but wasted no time and moved immediately to Gaziantep.

Yet, Widad’s feeling of relief and comfort only lasted for a short while. Something had changed in Tammam: he wanted to go to Europe. He set his plan into motion a few days later, leaving his family behind but promising they would be reunited once he would have settled in the west.

Tammam borrowed some money from friends and left for the Turkish coastal city of Bodrum, to get on one of the “death boats” to Greece.

He did not make it. The rubber boat capsized and Tammam drowned along with several others. He left behind his young wife and his four-year-old daughter, Suriya.

Widad now prays that Suriya/Syria can still have a better future, free of terror and war.

Department of Defense Press Briefing by Secretary Mattis, General Dunford and Special Envoy McGurk on the Campaign to Defeat Daesh

Bab Al Saray market is part of the fabric of Mosul

Thanks to USAID’s funding, Louay is reviving his ancestor’s business.