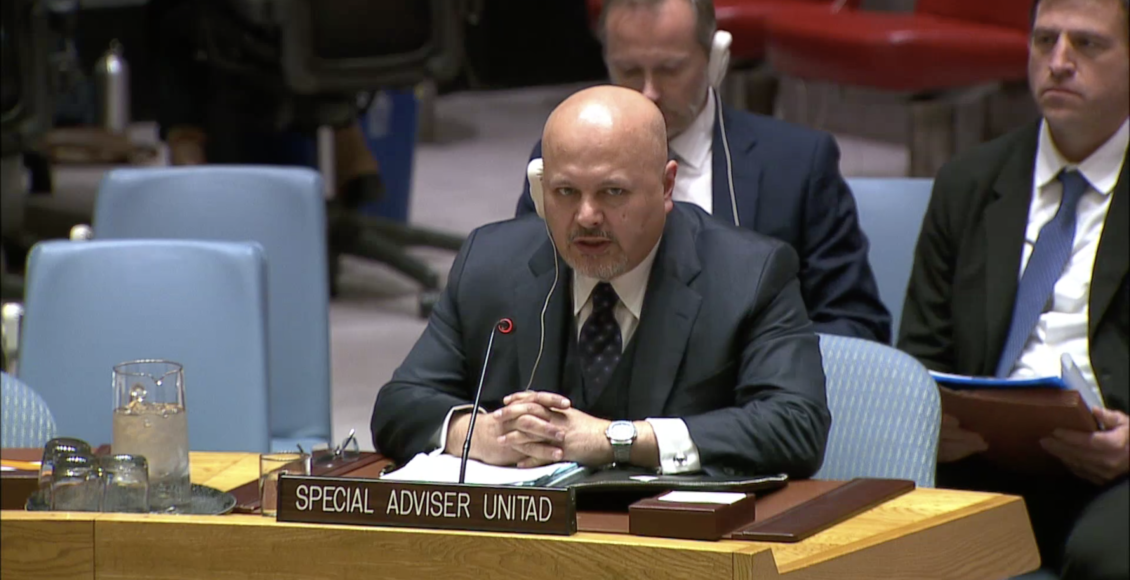 On 10 December, the 3rd anniversary of Daesh’s defeat in Iraq, the UN’s Chief Daesh Investigator will update the Security Council on urgent work to investigate crimes committed in Iraq by Daesh – also known as ISIL or ISIS.

Karim A. A. Khan QC, a British barrister, leads the United Nations Investigative Team to Promote Accountability for Crimes Committed by Daesh (UNITAD). His team supports Iraqi domestic efforts to hold Daesh accountable for acts that may amount to war crimes, crimes against humanity, and genocide. The team supports domestic efforts to hold Daesh accountable for their crimes by collecting, preserving, and storing evidence in Iraq from multiple sites.

During the briefing, Khan will announce significant advances in the mission to deliver justice for Daesh’s victims. He will set out how his team has achieved strong progress in the excavation of mass graves in Iraq, following the establishment of a common mass grave excavations strategy with the Government of Iraq. This includes the recent forensic excavation of sites in Solagh and Kojo in Sinjar, from which the remains of Yazidi women victims of Daesh were excavated – a process documented by the Global Coalition against Daesh in our #DaeshFacesJustice campaign – watch the film.

Khan will also tell the Security Council how UNITAD is supporting victims of Daesh, through the expansion of provisions for witness protection and support assistance to Iraqi authorities, including psycho-social support for survivors and family members during excavation activities.

“In the last six months, UNITAD has sought to face the unprecedented challenges of COVID-19 through an innovative approach to mandate delivery and the strengthening of partnerships with our Iraqi counterparts.

“In doing so, we have been able to maintain momentum in our investigations and continue crucial operational activities including evidence-digitization, witness interviews, and mass grave excavations.

“As reflected in our report, the ability to deliver on our collective commitment to the survivors of Da’esh continues to rest on our strong and unique partnership with the Government of Iraq, Iraqi civil society, religious leaders, and the international community.”

You can watch the proceedings live online from 20.00 GMT (15.00 Eastern Time) on Thursday 10th December. It can be viewed via UN WebTV: http://webtv.un.org/, which will also be available after the event.

The key updates from UNITAD’s fifth report include, which can be read in full here, include:

Accountability is the final part of the puzzle in bringing terrorists to justice.

Iraqi farmers getting back on their feet after Daesh