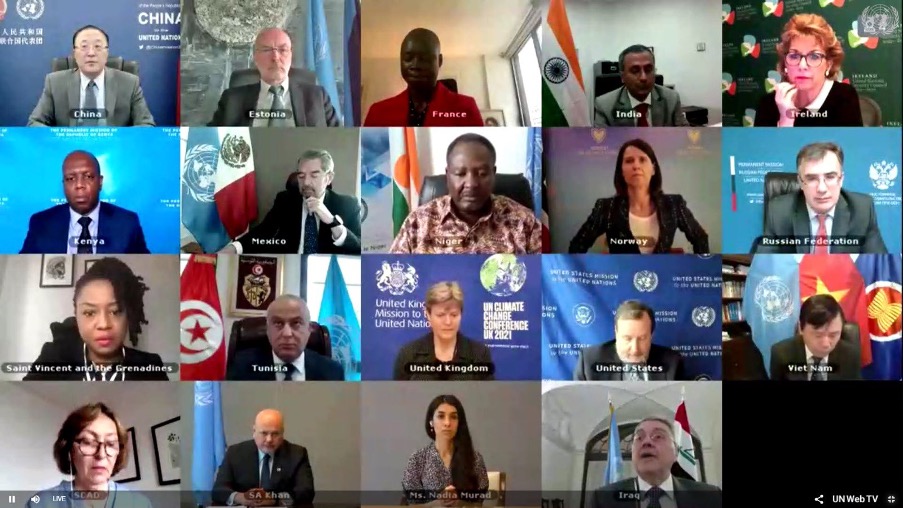 On Wednesday 12th May 2021, Special Adviser Karim Khan QC presented the sixth report of the United Nations Investigative Team to promote accountability for crimes committed by Daesh (UNITAD) to the UN Security Council. UNITAD, in partnership with the Government of Iraq, collects and stores testimonial, documentary and forensic evidence of acts which may account to war crimes, crimes against humanity or genocide, committed in Iraq. The work of UNITAD is crucial to securing justice and closure for those impacted by Daesh atrocities, and whose vital purpose is documented in this video from the Global Coalition’s #DaeshFacesJustice campaign.

The sixth report marked a significant milestone: two of the core investigative case briefs have now been completed, providing comprehensive evidence relating to the attacks on the Yazidi community in Sinjar region and the mass killing of unarmed cadets and military personnel at Tikrit Air Academy in June 2014. The report also presented additional areas of investigation including crimes committed against the Sunni Arab community and the use of chemical and biological weapons by Daesh in Iraq.

In his presentation to the Security Council, Karim Khan said UNITAD has found “clear and convincing evidence that the crimes against the Yazidi people clearly constituted genocide”. Daesh overran the Yazidi heartland in northern Iraq in 2014 forcing people to “convert or die”, murdering thousands of people, displacing most of the 550,000-strong community and forcing young women into servitude as “wives” of fighters. UNITAD have identified 1,444 potential perpetrators of which 469 have been identified to have participated in the attack on Sinjar and 120 in the attack on Kojo Village. Testimonial evidence has expanded findings, and DNA identifications and autopsy reports have confirmed key aspects of survivor’s accounts. UNITAD have also identified a significant number of internal Daesh documents which confirm the identities and activities of priority persons of interest. From this research, 14 individual case files for primary persons of interest have been collated, with liabilities meaning the identified perpetrators could be tried for war crimes, crimes against humanity or genocide. UNITAD launched a video outlining the range of evidence collected in its investigations into crimes committed against the Yazidi community in Sinjar.

Yazidi survivor and activist Nadia Murad, supported by counsel Amal Clooney gave testimony at the Security Council meeting and called for countries to act on evidence and formally prosecute perpetrators.

UNITAD also concluded that Daesh committed war crimes against predominantly Shia unarmed cadets and personnel from the Tikrit Air Academy who were captured, tortured and subjected to mass killings in June 2014. Karim Khan said a Daesh video released in July 2015 showing the killings “constitutes a direct and public incitement to commit genocide against Shia Muslims”. UNITAD have successfully geo-located images of victims and perpetrators shown in videos, drawing on reference images collected by a team on a recent mission to Tikrit. The team established the identities of 875 victim remains from 11 mass grave sites. Analysis of 640 anthropological reports received by the Team has corroborated the cause of death of victims and allowed UNITAD to identify 20 key persons of interest.

Crimes committed against the Sunni Community

The report included details on the work of a new field investigation unit focussed on crimes committed against the Sunni community. Initial analysis of relevant documentary holdings has facilitated the mapping of key incidents, focusing in particular on Anbar Governorate. Through the analysis of audio, photo and video materials, as well as witness statements, the Unit has developed an initial chronology of events.

Chemical weapons development and use by Daesh

Khan presented a new line of investigation into the development and use of chemical weapons by Daesh in Iraq which has moved forward rapidly.  Evidence collected has confirmed the implementation of a chemical weapons program centred at laboratories in Mosul University in 2014.  This initially led to the weaponising of chlorine from water treatment plants and the development of toxic lethal compounds including thallium and nicotine that were tested on live prisoners, leading to death.  In 2016, a sulfur mustard production system was deployed by Daesh through the firing of 40 rockets at the Turkmen Shia town of Taza Khurmatu.

Looking ahead, Special Adviser Khan noted that the progress made in the work of the Team to date had set a path for the prosecution of Daesh members for international crimes in Iraq, highlighting that his Report laid out a timeframe that would allow for trials against Daesh members to commence next year. The evidence gathered will help to ensure #DaeshFacesJustice with new countries including Sweden entering into a cooperation agreement with UNITAD.