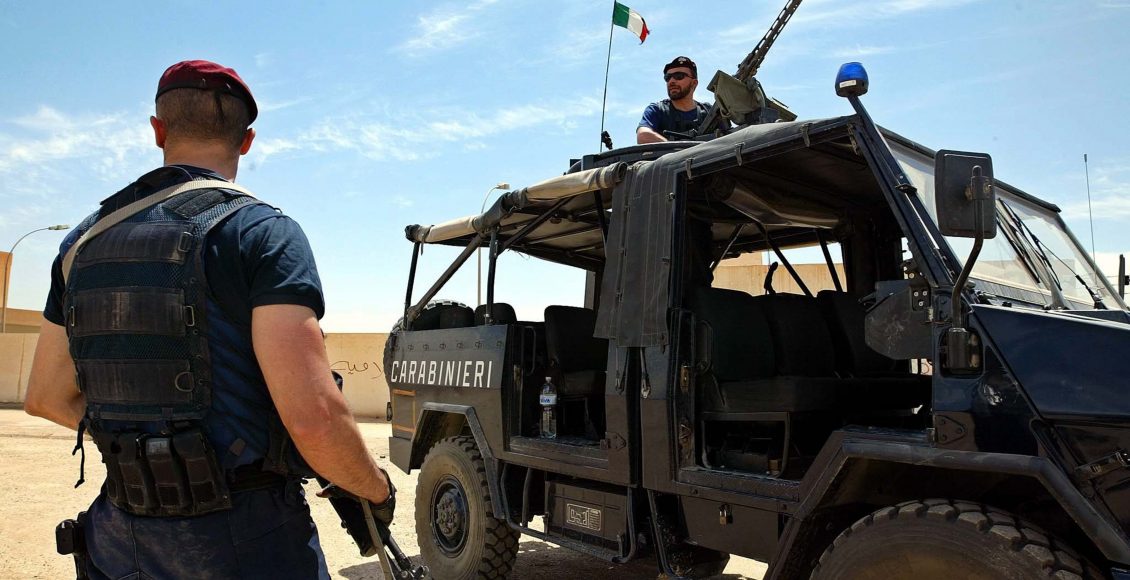 Italy plays a key role in the training of the Iraqi security and police forces, with around 17,600 units trained thus far. In particular, some of the Peshmerga forces trained by Italian personnel at the “Kurdish Training Coordination Centre” in Erbil bravely fought to liberate Sinjar from Daesh.

Additional units as well as 4 NH-90 and A129D Mangusta have been deployed in Iraq to carry out search and rescue operations. Italy also supports the Coalition’s military operations through air capabilities based in Kuwait: one KC-767 aerial refueling aircraft, one unmanned Predator surveillance aircrafts, four AMX aircrafts for intelligence, surveillance and reconnaissance operations and an integrated multi sensory exploitation cell. Italian assets have flown over 12,000 hours in patrol and reconnaissance sorties and have provided aerial refueling for the Coalition’s air assets. Moreover, Italy has also delivered over 150 tons of equipment to Iraq’s military.

Italy leads the Coalition’s police training mission in Iraq, designed to create the conditions, in terms of security and rule of law, for a safe return of IDPs and refugees to their homes. Thus far, the Carabinieri task force has trained around 8000 units from local and federal police, to be progressively deployed in liberated areas. In addition, Italy has already disbursed as much as $7 million to the UNDP Funding Facility for Immediate Stabilization.

Mindful of the potential catastrophic humanitarian consequences arising from a sudden collapse of the Mosul Dam, an Italian company will be taking care of the much-needed urgent works for its refurbishment. In light of the strategic importance of the infrastructure, and in full coordination with the “Combined Joint Task Force” of Operation “Inherent Resolve” and the Iraqi Government,  Italy is making available a force protection contingent with the specific goal of ensuring that the critical maintenance works can be safely performed. The deployment of the Italian military personnel was completed in October 2016.

Italy has taken the helm – together with the United States and Saudi Arabia – of the Counter-ISIL Finance Group. Building upon the strategy to counter Daesh’s financing enshrined in the CIFG’s Rome Plan approved in March 2015, Italy has worked to impose new financial sanctions; curtail financial flows to Daesh-controlled territory; strengthen international anti-money laundering and counter-terrorist financing measures; build up financial intelligence sharing within the Coalition; and support banking and financial institutions and their regulatory frameworks in the countries where Daesh operates.

The successful implementation of our strategy against Daesh requires the appropriate legislative and judicial measures. In this field, Italy recently approved enhanced legislation on countering terrorist financing, providing judicial authorities with stronger, more effective tools. In addition to introducing new criminal legislation to crack down on individuals financing or providing other kinds of support to terrorist groups, Italy is implementing restrictive measures for self-trained jihadists and foreign terrorist fighters. A dedicated interagency body, the Financial Security Committee, is entrusted with the power to oversee this comprehensive process, thus ensuring their thorough and consistent application and fostering information sharing.

With respect to humanitarian aid, in 2016 the Italian government allocated €6.2 million to Iraq for life-saving programs to protect internally displaced people, especially in the Kurdistan Autonomous Region. Our initiatives are currently being implemented. In 2017 we intend to further enhance our financial contribution. At the July 2016 “Pledging Conference in support of Iraq”, Italy has pledged a total of €390 million in grants and soft loans. A substantial share of our grant – €12 million out of the amount of €30 million pledged for the next three years 2016-2018 – will be devoted to humanitarian activities.

Moreover, Italy has disbursed a total contribution of over €122 million to Syria and its neighbors since the beginning of the conflict, in order to bolster the humanitarian response and support resilience, stabilization and development programs aimed at boosting social and economic empowerment. At the February 2016 London Conference, Italy pledged $400 million over the next three years in grants, as well as soft loans and debt reduction to neighbouring countries bearing the consequences of the Syrian crisis.

Italy has also taken the lead in the global efforts to counter the illicit trafficking of antiquities, cultural assets that form an essential part of Iraq’s cultural heritage, leading the specific sub-group created within the Coalition addressing this issue. Italy and Jordan jointly launched the “Unite4Heritage” initiative at UNESCO, with the aim of establishing a UN force to protect heritage sites in warzones.

On February 16, 2016, UNESCO’s Director-General, Irina Bokova, and the then Minister of Foreign Affairs and International Cooperation of Italy, Paolo Gentiloni, signed an agreement establishing an Italian Task Force of cultural heritage experts under the framework of UNESCO’s Global Coalition “Unite4Heritage”. Italy has also been engaged in long-standing archeological cooperation with the Iraqi government, leading six archaeological research missions in the country.

The bookstore Daesh tried to destroy