How Italy supports The Global Coalition against Daesh

Italy is among the top contributors of the Global Coalition against Daesh, actively supporting Coalition’s efforts in all lines of action: military, stabilisation, counter-financing, foreign terrorist fighters and counter narrative. In its firm commitment to fight terrorism, Italy has developed a multi-dimensional strategy, which integrates international and national engagement in order to maximize effectiveness and coherence. 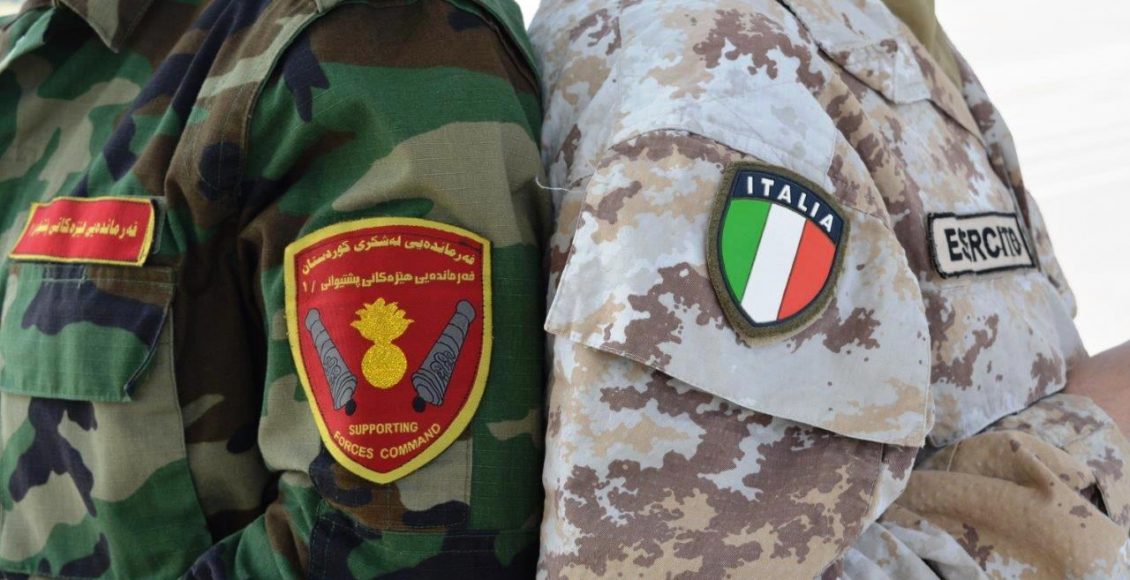 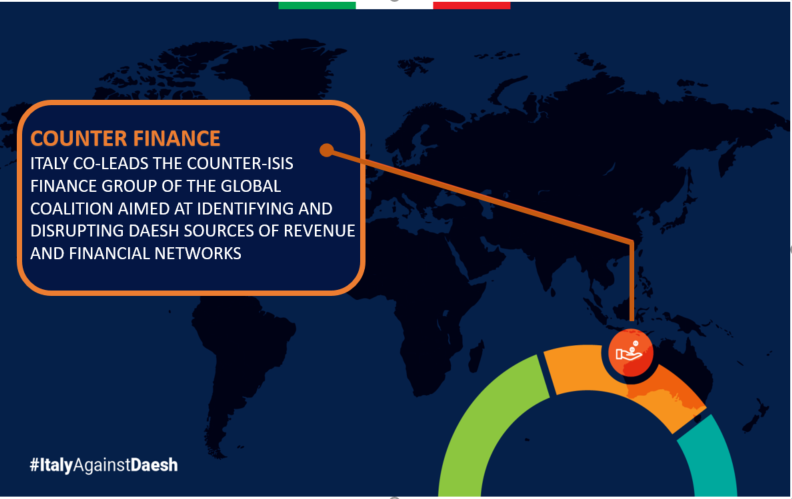 Italy – together with the United States and Saudi Arabia – co-leads the counter ISIS Finance Group (CIFG) aimed at identifying and disrupting Daesh’s sources of revenue and financial networks.
Building upon the strategy to counter Daesh’s financing enshrined in the CIFG’s Rome Plan, approved in March 2015, Italy has been working with the Global Coalition partners to: identify and disrupt Daesh’s access to regional and international financial systems, hinder Daesh’s global financial networks and its geographical affiliates, strengthen international anti-money laundering and counter-terrorist financing measures.

At national level, Italy fully implements UN resolutions related to counter terrorist financing. In this regard, Italy applies targeted financial sanctions and supports a common commitment among countries to strengthen collaboration in the implementation of financial sanctions.
Furthermore, in order better to tackle terrorism financing, in addition to United Nations and European Union measures, Italy has established an autonomous national freezing instrument.

A dedicated interagency body, the Financial Security Committee, is the competent key authority in charge of implementing financial sanctions established by the UN and the EU and is entrusted with the power to supervise this comprehensive process, ensuring an in-depth, consistent implementation of relevant legislation and increased information sharing among all relevant public authorities involved. 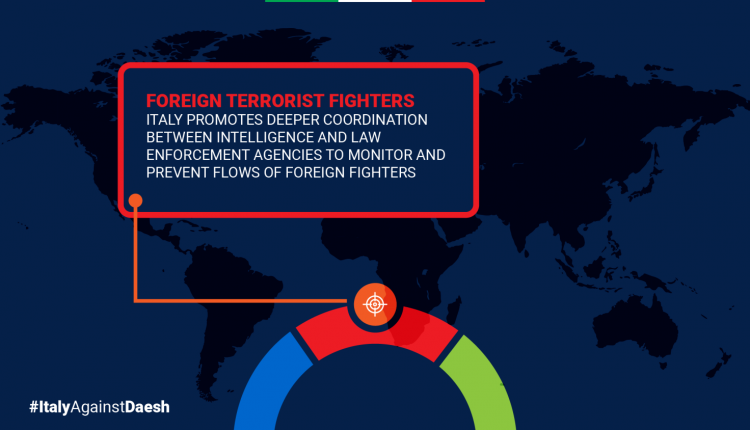 Italy is active in the framework of the Foreign Terrorist Fighters (FTF) working group to counter the flow of terrorists trying to cross borders. By boosting cooperation among security forces, the FTF Working Group promotes the sharing of information collected by Coalition partners in fighting terrorism, resulting in enhanced homeland security. We are promoting deeper coordination between intelligence and law enforcement agencies to monitor and prevent the flow of foreign fighters, thus improving information sharing and cooperation to help preventing radicalization and reducing the likelihood of attacks. 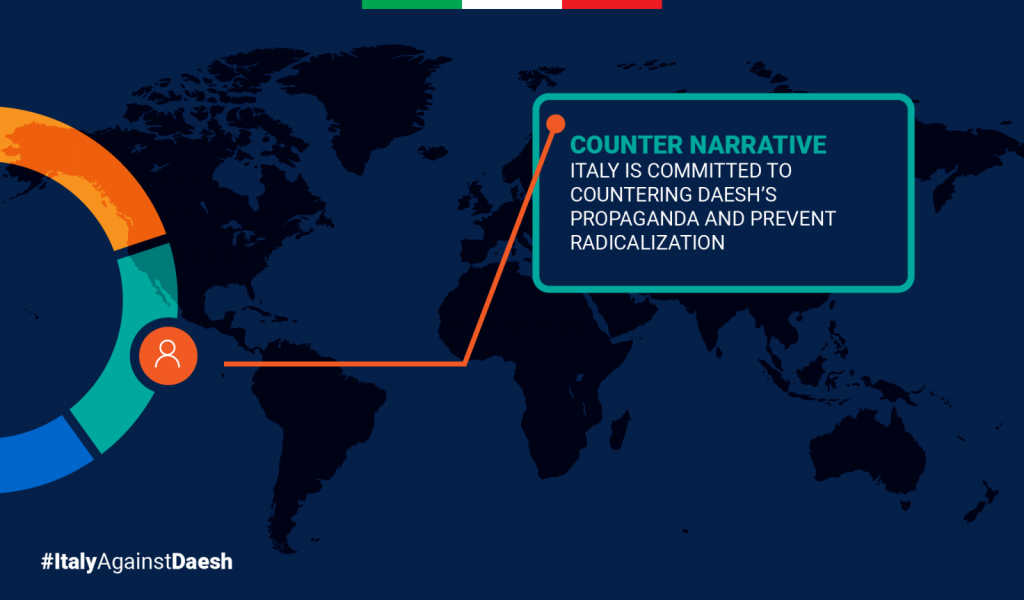 Daesh is adapting and reconstituting into a capable insurgency force with the ability to carry out significant attacks, no longer focused on the holding of territory in Iraq and Syria, but on the holding of minds.

Daesh will continue with its amended narrative. It has moved away from prioritising statehood and calling on Muslims to travel to Iraq and Syria, to a narrative of victimhood, blaming the West for the fall of the caliphate, and encouraging supporters to stay put and launch attacks at home.

In this contest, Italy strongly supports the efforts of the Global Coalition. We are part of the Communication Working Group and actively contribute to the Strategic Communications Cell, whose mission is countering Daesh’s propaganda and fighting their flawed narrative and heinous ideology.

Italy is engaged in making the internet a safe place and strengthening community resilience against radicalization. We engage digital platforms and media outlets to prevent them from becoming Daesh’s repositories and echo-chambers, enhance early detection of extremist content and speed up the removal process. 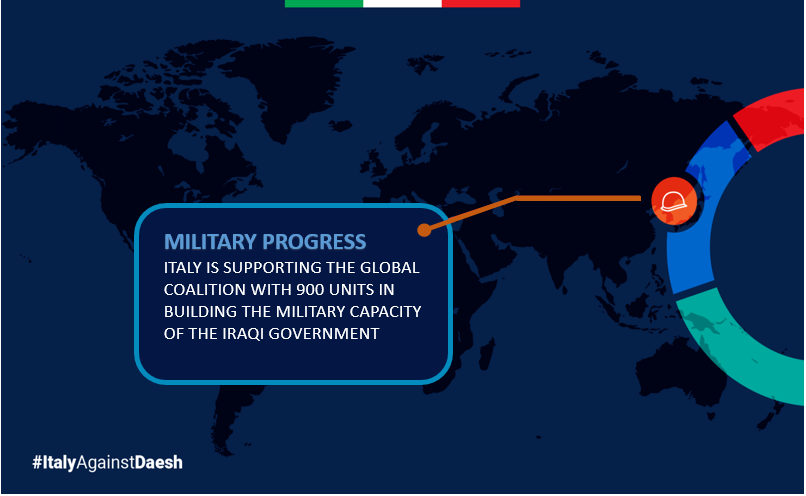 Italy is engaged in the capacity building of Iraqi and Kurdish military and carries out intelligence, surveillance, reconnaissance (ISR), air-to-air refueling and personnel transportation activities.

The Armed Forces of the countries that have joined the Coalition operate in compliance with Art. 51 of the UN Charter, as well as Resolutions 2170 (15 August 2014) and 2178 (27 September 2014), on the basis of a request for assistance submitted to the Chairman of the Security Council by the Iraqi Representative to the UN on 20 September 2014.

Italy’s current contribution provides for the engagement – in successive phases – of up to 1,497 soldiers, 390 land vehicles and 17 aircraft.
Training of the Kurdish Security Forces (Peshmerga) and Iraqi Security Forces takes place primarily at Erbil (Kurdistan) and Baghdad (Iraq) bases.
In Erbil, activities are conducted by Task Force Land, a formation of Army personnel established in January 2015. The Task Force operates within the framework of the Kurdistan Training Coordination Center (KTCC), led by Italy and Germany on a 6-month rotation basis. Trainers are provided by 9 nations (Italy, Germany, the Netherlands, Finland, Sweden, Great Britain, Hungary, Slovenia and Turkey). Italy is currently providing approximately 350 military, including 120 instructors. Courses conducted in favor of the Peshmerga are: Basic Infantry Training, Folgore Anti-Tank System Training, Use of Mortars and Artillery, Snipers’ Course, First Aid, Counter- IED.

In Baghdad and Kirkuk, training of the Iraqi Counter Terrorism Service (CTS) and Kurdish Special Forces is entrusted to members of the Italian Special Forces from all Single Services.

Task Group “Griffon” is a further contribution of the Italian Government to the Coalition. The TF, equipped with 4 transport helicopters NH90s, is in charge of personnel transportation in Iraqi Kurdistan.

Task Force Air Kuwait, based in Kuwait, ensures a synergic and coordinated engagement of operational assets KC 767A, Predator and AMX, to implement air-to-air refueling activities in favor of Coalition assets. TFA Kuwait is also tasked with situational awareness, requiring the engagement of Intelligence, Surveillance and Reconnaissance (ISR) AMX and Predator assets.

When Daesh’s lines were close to the Mosul dam, a strategic infrastructure that provides water supply for the population of the entire area, Italy deployed a military contingent – Task Force “Praesidium” – to protect the site, where an Italian company is carrying out the repair works. The fall of even a part of the dam would have caused massive casualties among the local population and jeopardized economic development in the whole region, not to mention the severe environmental damage. The improved security environment and new security arrangements allowed for a progressive withdrawal of the Italian troops. 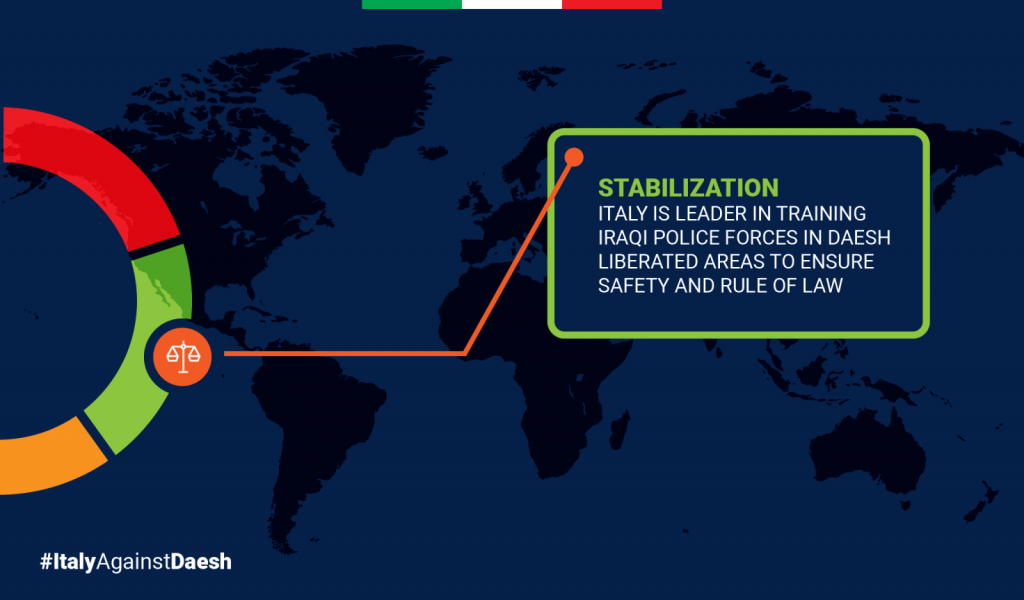 Stabilization of Iraq and Syria is crucial to achieve an enduring defeat of Daesh.

Italy is actively supporting the Global Coalition’s efforts to strengthen the security capabilities of the Iraqi Government and is the leading partner in training Iraqi Police Forces to ensure security and rule of law in liberated areas.

Furthermore, Italy has been one of the first contributors of the UNDP fund for immediate stabilization (FFIS).

In Iraq, we will continue to support local partner forces to stabilize and protect liberated territory by cooperating with local Iraqi authorities, to make their cities safe and provide assistance to local populations.

In Syria, Italy provides humanitarian assistance countrywide and has been carrying out stabilization programs in North East and North West in the sectors of agriculture, animal husbandry, health and local governance.

Aid continues to help Iraq in 2019