Opening Remarks at the Global Coalition to Defeat Daesh Ministerial 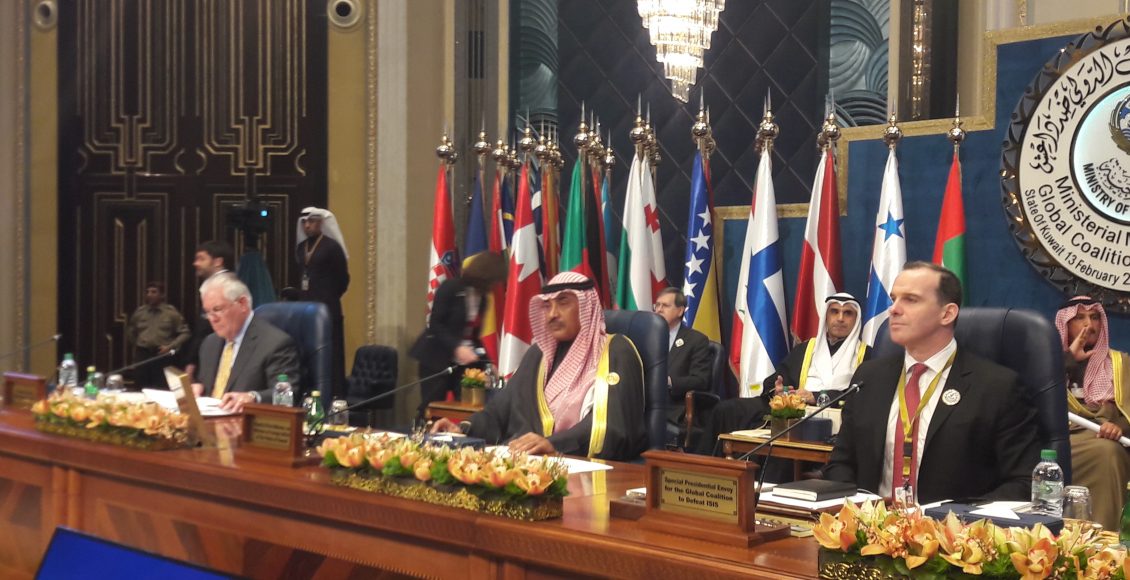 …responded to our invitation to take part in the meeting of the Global Coalition to Defeat Daesh, which is taking place for the first time after the liberation of Iraqi territory (inaudible) of ISIS (inaudible) continue with commitment of the members of the Global Coalition Against Daesh. And this is obvious through the ongoing collaboration and cooperation between the members of the Coalition to defeat any kind of terrorism.

On this occasion, I would like to reiterate my heartfelt congratulations to the Iraqi people on their victory, the historic victory and the liberation of their country from ISIS.

Excellencies, ladies and gentlemen, we are all aware of the amount of effort exerted by Iraq and the rest of the member countries in the global coalition in their war against so-called ISIS, and these efforts actually culminated in liberating Iraq from ISIS. Today, we are required to continue exerting efforts in times of peace just like we did in times of war.

Stemming from this fact, the state of Kuwait has announced, upon the initiative of His Highness Sheikh Sabah al-Ahmad al-Jaber al-Sabah, the emir of the state of Kuwait, may God protect him, it has announced the holding of the Kuwait International Conference for the Reconstruction of Iraq, which will be taking place alongside this current meeting in an effort to preserve the stability, security, and unity, as well as territorial integrity, of Iraq. This is an effort to pave the way and to find the favorable conditions to start the reconstruction of that country.

Excellencies, ladies and gentlemen, despite the very positive developments and outcomes that we have achieved on the ground, the international community continues to face a direct threat by armed terrorist groups. And this is why it is a fair amount important for our coalition to continue exerting international efforts and to continue coordinating jointly to fight terrorism and to further develop the strategy set forth by the Global Coalition to Defeat Daesh.

In this framework, we are full of hope that the efforts of the Government of Iraq will succeed and will be fruitful in holding the perpetrators of terrorist acts accountable, to avoid any impunity. And this should happen according to the UN mechanisms as reflected in the resolution, in the Security Council Resolution 237 of the year 2017. And also we need to exert or to step up the experience of Iraq in terms of judicial capabilities to – in this regard, and we need to continue working to stem the flow of terrorist – foreign terrorist fighters, in accordance to international resolutions 2396, 2253, 2199, 2178, and 2170.

At the end, I wish to welcome you once again in the state of Kuwait, and I hope that this meeting will be a successful one and will be a continuation of the many successes achieved by the Global Coalition to Defeat Daesh. And we hope that we will come up with recommendations and strategies that we can implement on the ground in an effort to protect the international community from extremism and terrorism. Thank you. (Applause.)

I now have the honor of giving the floor to my friend and colleague, the U.S. Secretary of State Mr. Rex Tillerson. The floor is yours, sir.

Good morning, and thank you, Excellencies, Minister al-Sabah, for the – for welcoming me today, and I want to also greet excellencies, colleagues, and friends of the Coalition. I appreciate the opportunity to address you.

It has been approximately three and a half years since the Global Coalition began its effort to defeat ISIS. At the time we started our efforts, ISIS/Daesh was thriving. Today, ISIS/Daesh is failed. Approximately 98 percent of the territory once held by ISIS in Iraq and Syria has been liberated. Approximately 3.2 million Syrians and 4.5 million Iraqis have been freed from the tyranny of ISIS. Over 3.2 million internally displaced Iraqis are now back home. ISIS’s leadership, online presence, and global network are under more pressure than ever.

But the end of major combat operations does not mean that we have achieved the enduring defeat of ISIS. ISIS remains a serious threat to the stability of the region, our homelands, and other parts of the globe. Without continued attention on the part of coalition members, we risk the return of extremist groups like ISIS in liberated areas in Iraq and Syria and their spread to new locations.

Each of us must continue our commitment to the complete defeat of ISIS. Maintaining stabilization initiatives is essential in this regard. If communities in Iraq and Syria cannot return to normal life, we risk the return of conditions that allowed ISIS to take and control vast territory. We must continue to clear unexploded remnants of war left behind by ISIS, enable hospitals to reopen, restore water and electricity services, and get boys and girls back in school.

In Iraq, it is critical that the funding facility for stabilization be fully funded in this, its final year, in order to ensure the stabilization initiatives led by the Government of Iraq can be well-positioned to prevent a resurgence of ISIS. The United States appreciates the generous contributions of coalition members over the past year, but we all must do our part to ensure that (inaudible) stabilization (inaudible) in Mosul City, western Anbar, western Nineveh, and (inaudible).

In Syria, the United States continues to be the world’s largest donor of humanitarian assistance to the Syrian crisis. At the end of January we provided more than $216 million in new funding, bringing our total humanitarian assistance to nearly $7.7 billion since the start of the crisis. Today, I am announcing that we are providing an additional $200 million to further support critical stabilization and early recovery initiatives in liberated areas of Syria.

To ensure an enduring defeat of ISIS in Iraq and Syria, we are working with the Global Coalition and local partners to consolidate military gains. Home forces are essential to securing liberated areas and setting the conditions for safe and voluntary return of IDPs and refugees.

The United States will maintain a conditions-based and ISIS-focused military presence in Syria. As part of that presence, we will continue to train local security forces in Syria. We are also working to ensure the local forces we train are effective, professional, accountable, and respectful of human rights. It is essential that these forces be representative of their local communities and do not pose a threat to neighboring communities or neighboring countries.

In Syria, we remain concerned over recent events in northwest Syria and call on all parties to remain focused on defeating ISIS, de-escalating and resolving the Syrian conflict, and protecting innocent civilians.

We are keenly aware of the legitimate security concerns of Turkey, our Coalition partner and NATO ally. We will continue to be completely transparent with Turkey about our efforts in Syria to defeat ISIS, and we stand by our NATO ally in its counterterrorism efforts.

As ISIS continues to evolve, so must the Coalition. (Inaudible) ISIS is attempting to morph into an insurgency in places like Afghanistan, the Philippines, Libya, West Africa, and others, and is trying to carve our and secure safe havens. We have seen in Iraq and Syria the consequences of an ISIS territorial threat. History must not be allowed to repeat itself elsewhere.

As ISIS fighters (inaudible) Security Council Resolution 2396 is a new and effective tool for countering threats posed by foreign terrorist fighters. The United States calls for quick implementation and full enforcement of the resolution.

Lastly, we must keep up the pace of combatting ISIS as it continually seeks to radicalize, recruit, and direct operations online. We must be aggressive in online spaces (inaudible) such as the instant messaging service (inaudible).

The fight against ISIS will remain difficult. Coalition partners must call on all international powers to eradicate this threat. Every one of us must continue to adapt and strengthen our coalition through counter-ISIS’s own network of foreign fighters, financing, and propaganda. And we must continue to deepen our partnerships in the Global Coalition to Defeat Daesh.

The United States supports the revised guiding principles being presented today. They reaffirm our common determination to continue our efforts until we have achieved the full and enduring defeat of ISIS. And they (inaudible) our vision (inaudible) the coalition and our ongoing cooperative efforts.

As the opening line of the guiding principle says, “We are,” and I quote, “united in our determination to defeat ISIS/Daesh through a focused, sustained, and multifaceted effort.” It is now our duty to keep taking action that reflects that determination. (Applause.)

In Focus, ISF and Coalition Partnership