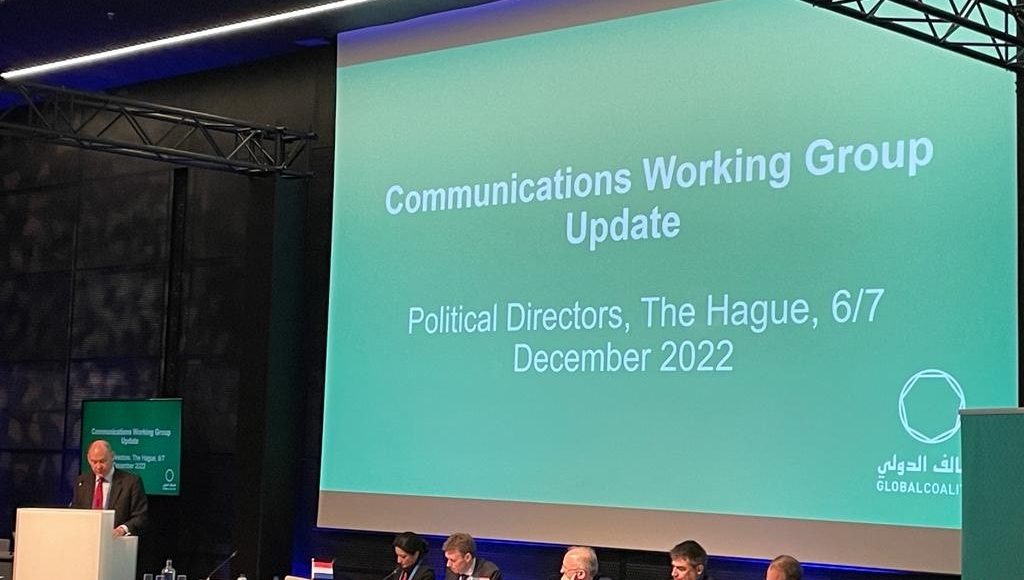 The Kingdom of the Netherlands and the United States hosted a meeting of political directors from the Small Group of the Global Coalition to Defeat Daesh yesterday in the Hague.  Political Director Mr. Marcel de Vink of the Netherlands, and Deputy Special Envoy to the Coalition Mr. Ian McCary of the United States, updated partners on collective efforts to counter Daesh worldwide.

Members of the Coalition discussed recent efforts to address Daesh/ISIS in Iraq and Syria, including the dire humanitarian and security needs in al-Hol camp and detention centers in northeast Syria, which remain an urgent concern in the region and require sustainable long-term solutions.  Members discussed repatriation, in particular support to Iraq through the UN Global Framework for the Prosecution, Rehabilitation and Reintegration of Iraqi returnees and screening opportunities offered by INTERPOL to enhance background and security checks.

Coalition participants discussed efforts to harmonize with other relevant regional and multilateral initiatives, such as the Coalition for the Sahel, to take advantage of comparative approaches and use the Coalition among other efforts to engage with African states and enhance civilian-led efforts to defeat Daesh/ISIS and other terrorist organizations on the African continent through work in areas such as battlefield evidence, biometric information, and border security.

Participants also exchanged information on the ISIS-Khorasan threat and resulting border security issues in South and Central Asia, including streamlining information sharing through I-24/7 secure communication channels, to create a collective understanding from which to build upon for future Coalition discussions.

The Coalition continues to adapt its counterterrorism strategies in the context of an evolving threat landscape and the expansion of ISIS and other terrorist threats and is resolved in its determination to achieve the enduring defeat of Daesh/ISIS wherever it operates, and to holding ISIS terrorists accountable under criminal justice systems.

The Coalition welcomes Saudi Arabia’s announcement to host the next Ministerial Meeting of the Global Coalition.

First woman Mukhtar (Head of the town) in Kirkuk

The US’ contribution to supporting vulnerable communities in Iraq