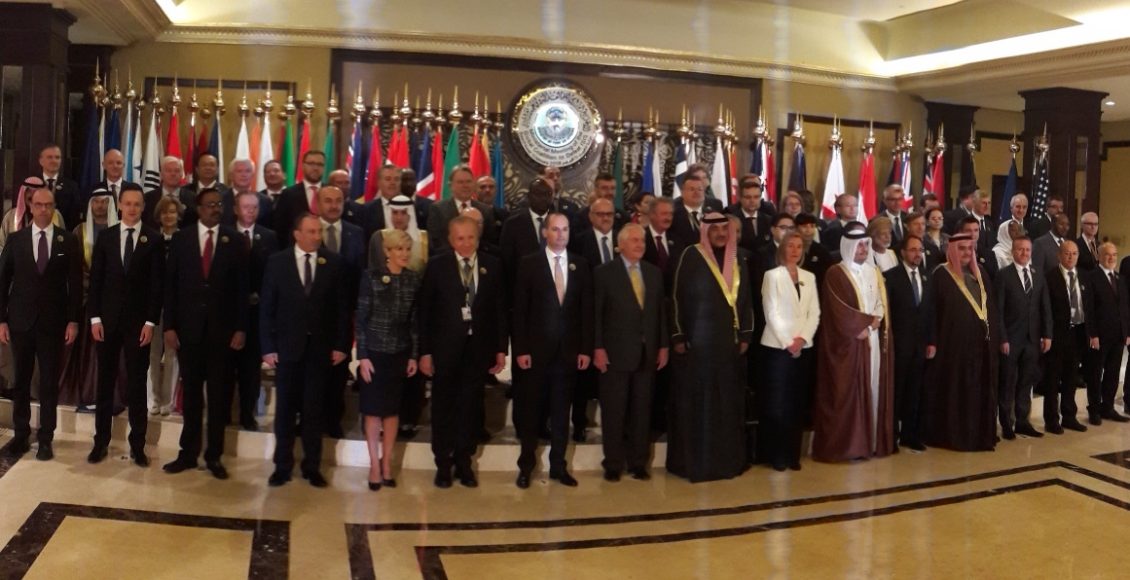 But our work is not done. ISIS/Da’esh remains a serious threat to the stability of the region and to our common security. Enduring defeat will come when ISIS/Da’esh no longer has safe havens from which to operate; when it no longer poses a threat to our homelands; and when it can no longer convey its ideology of hate globally. Recognizing that we are at an inflection point, where we must sustain attention to Iraq and Syria to secure our significant gains, while simultaneously adapting our footing to curb ISIS/Daesh’s global ambitions, we offer these Guiding Principles as our vision for the future of this Coalition.

Ultimately to achieve a full and enduring defeat of ISIS/Da’esh, the Coalition will fully eliminate ISIS/Da’esh as a territorial threat in Iraq and Syria and stabilize liberated communities in an inclusive manner. We will mobilize Coalition members and external partners, using a whole-of-government approach, to disrupt ISIS/Da’esh networks and its branches and affiliates, including possible new manifestations and variants, and deny its freedom of movement, safe havens, and access to resources in accordance with and in support of UNSCR 2396. We will combat ISIS/Da’esh’s ideology to prevent its reemergence, recruitment, and expansion. We will support local voices that offer an alternative vision to ISIS/Da’esh’s propaganda, and we will redouble our efforts to deny ISIS/Da’esh space to exploit social media and the Internet. We will work to consolidate our gains to date and prevent a re-emergence of ISIS/Da’esh by supporting Iraqi-led political and security sector reforms, and, through UNSCR 2254, committing to reach a political solution in Syria, thus helping to address root causes for the appearance of ISIS/Da’esh.

Our approach rests on a number of key pillars. First, we see this Coalition as a mobilizing and coordinating mechanism nested in a much larger diplomatic, military and counterterrorism ecosystem, in accordance with the principles of international law, including the Charter of the United Nations, and relevant Security Council Resolutions. Second, we recognize nations bear primary responsibility for defending their homelands against ISIS/Da’esh; our Coalition must work by, with, and through our partners. Third, membership in this Coalition is voluntary, as are the contributions each of us makes to this effort. Fourth and finally, we agree there is no single approach to the defeat of ISIS/Da’esh– each one is tailored to address the unique nature of the threat in a given country or region – importantly, most approaches to ISIS/Da’esh globally will not mirror our efforts in Iraq and Syria, where Coalition-led military action has been central. That said, we agree there is great utility in sustaining collaboration and unity of purpose across the Coalition against ISIS/Da’esh and ISIS-related threats on a global scale.

At the heart of our collaboration are the Coalition’s Working Groups, and each one has a unique path forward.

The Counter-Finance Working Group (CIFG) focuses on identifying and disrupting ISIS/Da’esh’s ability to generate revenue and access the regional and international financial systems. As ISIS/Da’esh adapts in response to its territorial losses in Iraq and Syria, the CIFG will adapt with it, leveraging its collaboration with like-minded multilateral organizations and encouraging members to take more concrete actions against ISIS/Da’esh financing.

The Foreign Terrorist Fighter Working Group (FTF WG) focuses on supporting and encouraging preventive, counter-terrorism-related information sharing through appropriate bilateral and collective law enforcement channels (such as Interpol), rehabilitation/reintegration, law enforcement and legal/criminal justice actions to mitigate the FTF threat (including FTF and their families returning, relocating and resurfacing). The FTF WG will continue to serve as a platform for an international whole-of-government approach, enhancing collaboration and capacity building within and across disciplines and seeking close connections and where possible integration with relevant international CT structures such as the Global Counterterrorism Forum.

The Communications Working Group seeks to contest the information space in which ISIS/Da’esh operates and to ensure that the contraction of the group’s territory is followed by its ideological defeat. It co-ordinates and coalesces the strategic communications approaches of Coalition members; fosters external partnerships to amplify the reach and impact of the international community’s efforts to degrade ISIS/Da’esh propaganda; and it builds resilience in vulnerable audiences – all aimed at reducing ISIS/Da’esh’s capability to use propaganda to recruit, and to incite and inspire violence. We will share expertise and best practice to tackle future propaganda threats from other violent extremist organizations.

The Working Group on Stabilization plays a central role coordinating and promoting international stabilization efforts in Iraq and, where possible, in Syria. Successful IDP return is essential to consolidate the military defeat of ISIS/Da’esh. In the course of 2018, as stabilization work in Iraq begins to conclude, the group will also assist the Iraqi Government’s efforts to secure the significant military gains against ISIS/Da’esh and prevent new violence in liberated areas by supporting the transition from stabilization to sustainable reconstruction. At the same time, the Police Training Sub Group will strengthen its focus on “blue training” and support the Iraqi government’s efforts to restructure the Federal police and create a civilian police force that represents and is trusted by all citizens in Iraq. In Syria, the Working Group on Stabilization will coordinate and promote stabilization efforts with the aim of strengthening credible, inclusive and non-sectarian governance, in accordance with and in support of UNSCR 2254.

Across lines of effort, we will work to ensure women and women’s organizations are fully and actively engaged and included in peacebuilding and stabilization efforts, in accordance with UNSCR 2242, and will seek to ensure our policies and practices are gender-informed and guided by international legal frameworks.

The Global Coalition to Defeat ISIS/Da’esh was founded in September 2014 based on the worldwide concern over ISIS/Da’esh and the threat it poses to international peace and security. The Coalition has made enormous progress since then, but our work is not done. Looking ahead, we recognize the need to remain alert to the inevitable evolution of the ISIS/Da’esh threat, and to flexibly adapt our response, including through existing multilateral and regional counterterrorism and CVE institutions. We will revisit these Guiding Principles as appropriate. We recognize that the Coalition and its Working Groups serve to focus the international community’s attention on countering the global/transnational threat of ISIS/Da’esh. With that in mind, the Coalition should look to share its expertise into international counterterrorism efforts wherever possible, with an eye to a time in the future when the international community is confident it has the tools to address and neutralize ISIS/Da’esh and ISIS-related threats.

Global Coalition to meet in Kuwait

Opening Remarks at the Global Coalition to Defeat Daesh Ministerial