The Government of Iraq last night announced the destruction of the Great Mosque of al-Nuri in western Mosul, by Daesh terrorists. 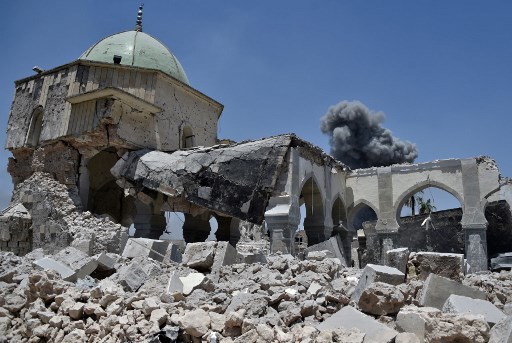 Smoke billows in the background behind the destroyed Al-Nuri Mosque in the Old City of Mosul, after the area was retaken from IS, on June 30, 2017. Explosions on June 21 evening levelled the mosque, where Abu Bakr al-Baghdadi gave his first sermon as leader of the Islamic State group and its ancient minaret. - Iraq will declare victory in the eight-month battle to retake second city Mosul from jihadists in the "next few days," a senior commander said on June 30, 2017. Iraqi forces launched the gruelling battle for Mosul on October 17, 2016, advancing to the city and retaking its eastern side before setting their sights on the smaller but more densely populated west. (Photo by FADEL SENNA / AFP)

The Al Nuri mosque which was so important to Daesh that it’s where their leader gave a speech declaring the so-called ‘caliphate’ in 2014 has now been blown up by them in recognition of their defeat.

Daesh destruction of the Mosque demonstrates they are admitting defeat in Mosul and have no respect for religion.

The mosque had stood in Mosul for over eight centuries, and its famous leaning minaret earned the city of Mosul the nickname “the hunchback.”

The Global Coalition is working by, with, and through the Government of Iraq to defeat Daesh in Mosul and throughout Iraq.  The nations in the Global Coalition contribute to the defeat of Daesh by providing the Iraqi forces with equipment, training, intelligence and surveillance, precision fire support and military advice to leaders. This alliance has enabled the Iraqi Security Forces to reclaim over 47,000 square kilometres of their land from Daesh for the people of Iraq.

“This is a crime against the people of Mosul and all of Iraq, and is an example of why this brutal organisation must be defeated,” said Martin. “The responsibility of this devastation is laid firmly at the doorstep of Daesh, and we continue to support our Iraqi partners as they bring these terrorists to justice. However, the battle for the liberation of Mosul is not yet complete, and we remain focused on supporting the ISF with that objective in mind.”

The Global Coalition is comprised of more than international partners and was formed in September 2014. Its mission is to degrade and defeat Daesh through five structured lines of effort: militarily, cutting Daesh finances, stemming the flow of foreign fighters, stabilisation efforts and degrading their poisonous ideology.

The Red Cross opens a centre for amputees in Mosul