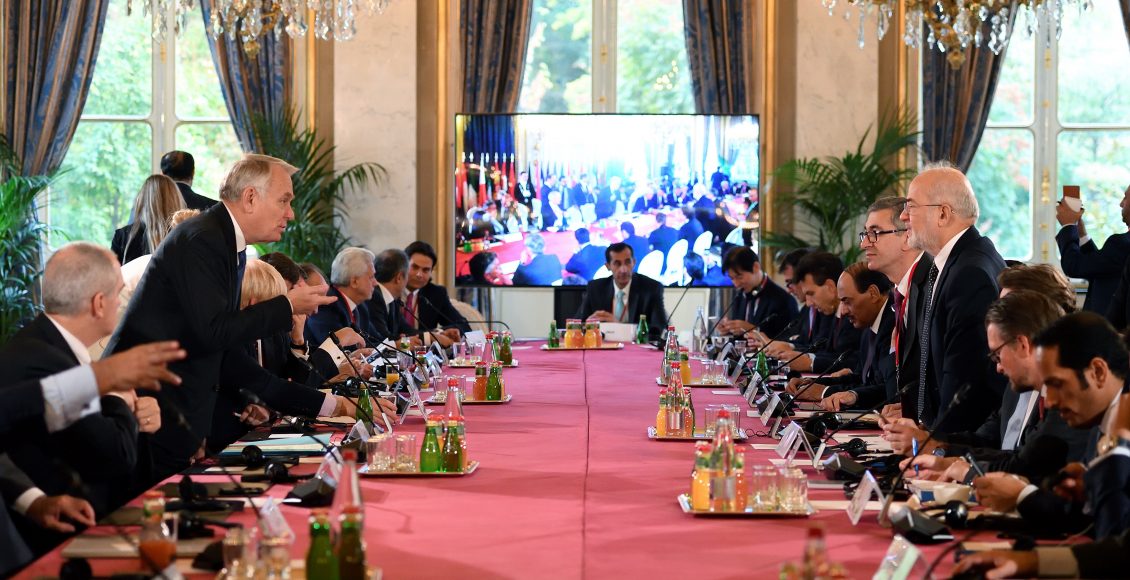 French Foreign minister Jean-Marc Ayrault (standing L) talks with his Iraqi and Italian counterparts Ibrahim al-Jaafari (standing R) and Paolo Gentiloni (behind al-Jaafari) during an international meeting co-hosted by France and Iraq on the future of Mosul following the start of the offensive this week, on October 20, 2016 at the French Foreign ministry in Paris. - French President Francois Hollande warned on October 20, 2016 that Islamic State jihadists under attack in the Iraqi city of Mosul are already fleeing to Raqa, their stronghold in neighbouring Syria. (Photo by ERIC FEFERBERG / POOL / AFP)

France and Iraq co-chaired a ministerial meeting for the stabilization of Mosul in Paris, on 20 October 2016, bringing together Bahrain, Canada, China, Egypt, Germany, Iran, Italy, Japan, Jordan, Kuwait, the Netherlands, Oman, Qatar, Saudi Arabia, South Korea, Spain, Turkey, the United Arab Emirates, the United Kingdom and the United States, as well as the United Nations, the European Union and the League of Arab States.

The Paris meeting came at a decisive moment in the campaign of the Iraqi and Global Coalition forces to bring down the terrorist organization Daesh, as operations to free the city of Mosul and the surrounding area begun.

The meeting’s participants welcomed the courage of the Republic of Iraq’s armed forces and the Peshmergas, as well as of the members of the Coalition’s various armed forces supporting them. They also remembered the fighters who have fallen in the fight against Daesh (Iraqi police and armed forces, peoples’ and tribes’ mobilization and the Peshmergas), and the considerable sacrifices endured by the Iraqi people.

Reconstruction of Mosul University is under finalisation