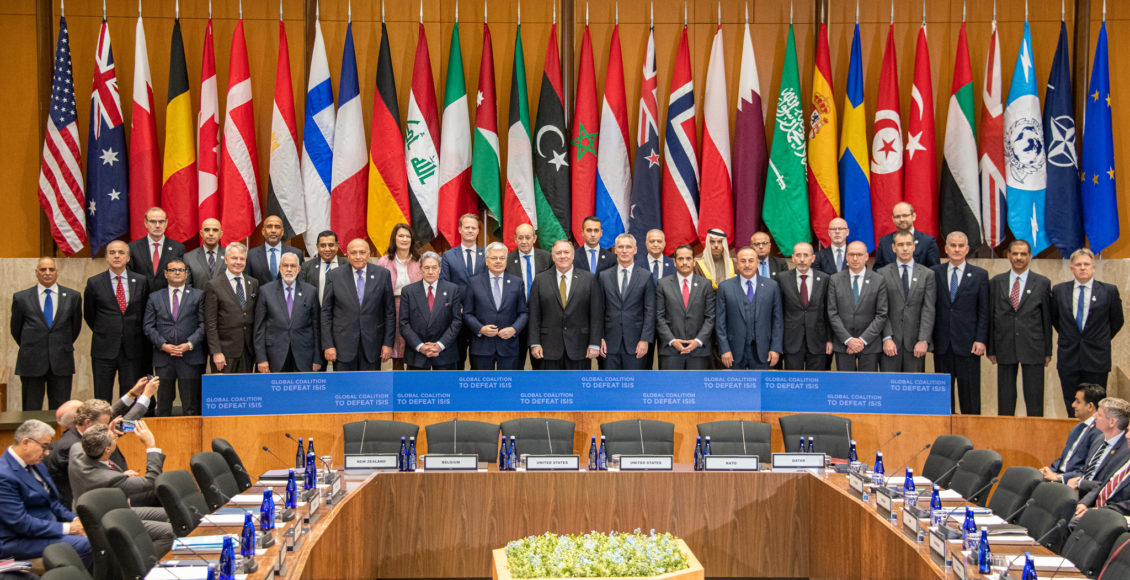 Over five years of military and civilian engagement, the Global Coalition to Defeat Daesh, with its partners, have liberated Iraq and northeast Syria from Daesh’s grip. At its peak, Daesh controlled nearly 110,000 square kilometers of territory, including major cities in both Iraq and Syria and attracted more than 40,000 Foreign Terrorist Fighters.

The Coalition campaign has liberated approximately 7.7 million people from Daesh’s control. Coalition members have helped raise over $20 billion in humanitarian and stabilization assistance in support of the Iraqi and Syrian people, and trained and equipped more than 220,000 security and police personnel to stabilize local communities.

In the most recent Coalition success, U.S. forces raided the compound of Daesh’s leader, Abu Bakr al-Baghdadi, resulting in his death.
These successes have come at tremendous sacrifice: tens of thousands of local partners in Syria and Iraq have died while fighting Daesh, and more than 100 Coalition service members have given their lives as part of the Defeat Daesh mission. In the past days, some Italian soldiers of the Coalition have been seriously wounded by an IED attack in Iraq.

Today, these achievements and Daesh’s enduring defeat are threatened. The Coalition thus must maintain unity of purpose and cohesiveness in Syria and Iraq.

We, Ministers of Foreign Affairs of the Global Coalition to Defeat Daesh Small Group, affirm our common willingness and continued resolve to address a new phase in this fight by pursuing our joint effort against Daesh in Iraq and Syria.

1. We, Ministers of Foreign Affairs of the Global Coalition to Defeat Daesh Small Group, urge all actors operating in northeast Syria to continue to be vigilant against threats of terrorism in all its forms and manifestations, to maintain the progress achieved by the Global Coalition to Defeat Daesh, to act together against any threats to this outcome and avoid security vacuums in the region that Daesh may exploit. Continued detention of Daesh-related individuals, including Foreign Terrorist Fighters, in northeast Syria remains to be of paramount importance. International law, including international humanitarian law and the protection of civilians and international human rights law must be upheld under any circumstances.

2. Despite the challenging situation, we reaffirm our full commitment to ensure the enduring defeat of Daesh. We reiterate the importance of maintaining and allocating adequate military and civilian means and resources to sustain Coalition momentum and success against Daesh in Iraq and Syria and to best safeguard our collective security interests, in pursuit of the ongoing military campaign. This will enable us to counter any attempt by Daesh to reconstitute or enhance its capacity to plan and execute attacks against our countries as well as our partners and allies. This also includes continuing to train, advise, and support legitimate partner forces in the region engaged in the fight against Daesh’s remaining cells and networks in both Syria and Iraq while respecting international law.

3. We reiterate the importance of ensuring accountability for all Daesh terrorists and we commit to promoting their safe and humane detention and eventual prosecution. We will continue our efforts to hold accountable Daesh terrorists, including to prevent those detained, hiding underground, or sheltering beyond Coalition control, from returning to the battlefield in Iraq and Syria, or relocating elsewhere and plotting attacks against other countries. Information sharing via bilateral and/or multilateral law enforcement channels like INTERPOL, will continue as a key component in this endeavor. We remain committed to promoting efforts to ensure that accused terrorists, including those of foreign nationality, are treated appropriately and tried consistent with international law and fair trial, and we urge the custodians of the detained Daesh fighters to treat them humanely at all times, and in accordance with international law.

5. We highlight the importance of stabilization support for liberated areas from Daesh in Iraq and those in Syria that remain out of the Syrian regime’s control and where the rights of the local population are not being ignored or violated. We call on all members to insist on a robust supply of humanitarian assistance to all people in need. We urge all actors operating in northeast Syria to refrain from any action that could lead to change in the demographic structures in northeast Syria, and to commit to ensure that refugees and internally displaced persons created since the outset of the conflict in Syria should only return in a safe, voluntary and dignified manner in accordance with the standards adhered to by UNHCR; that they are guaranteed freedom of movement; and that full, unimpeded and safe humanitarian access to all areas in the region is verifiably granted.

6. We commend the continuing commitment of the Government of Iraq in its fight against Daesh and reaffirm our dedication to assisting at their request their ongoing efforts to secure an enduring defeat of the terrorist organization. While the Government of Iraq and the Coalition have liberated all territory once held by Daesh, Daesh remaining elements continue to exploit seams between security forces and vulnerable populations. In addition to the Coalition’s support for Iraqi Security Forces, as well as the Peshmerga, we will continue supporting the Government of Iraq and the UN’s stabilization and humanitarian efforts, including for the more than 1.5 million displaced persons.

7. Despite Daesh’s territorial setbacks in Iraq and Syria, none of its branches has renounced its allegiance to Daesh. These branches have served as trans-regional enablers, providing support to organize, plan, raise funds, communicate, recruit, train, produce media, and plan external operations. The Global Coalition must also remain vigilant and work against the threat of Daesh branches and networks around the world, upon the request or prior consent of the country or state in which Daesh branch or network exists, and while fully respecting international law. By reaffirming our commitment to combatting Daesh’s ideology to prevent its re-emergence, recruitment and expansion, we will continue to support local voices that offer an alternative vision to Daesh’s propaganda, and will further redouble our efforts to deny Daesh space to exploit social media and the Internet.
We will encourage other members of the Global Coalition to Defeat Daesh to adopt the same guidelines.

8. We welcome the offer by Italy to host in 2020 the next meeting of the Ministers of the full Global Coalition to Defeat Daesh.

Our work is not done

What teaching means to educators in Raqqa