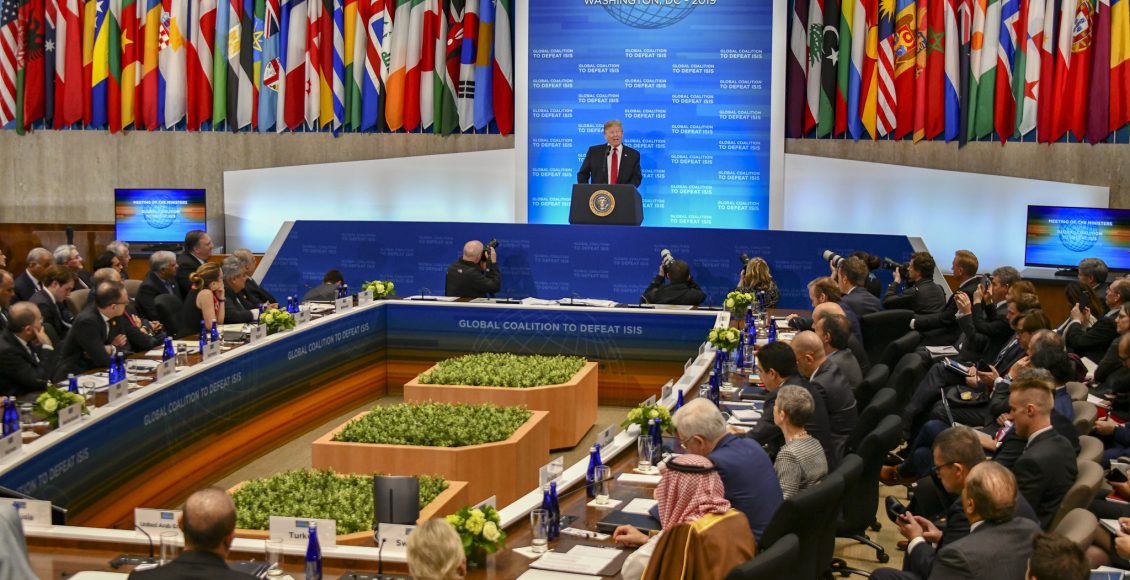 Why was this meeting being held?
The Coalition Ministerial Meetings are where ministers from the 79 partners of the Global Coalition meet to discuss and coordinate efforts to degrade and destroy Daesh, and stabilise liberated areas. This meeting was particularly important as the struggle against Daesh is entering a new phase, with Daesh having lost 99.5% of the territory they once held, but remaining a threat to the region and the world through their international terrorist network.

So who came?
Ministers, heads of delegation, and Secretaries-General from the Global Coalition partners all came together in Washington, D.C. All 74 Member states and 4 partner organisations sent representatives. The Official Coalition Representative (@RepCoalition) was also attending, and live-tweeting the event.

Why was it important?
We are close to achieving an important milestone in the campaign to defeat Daesh, so it the timing of this meeting was important. It allowed Ministers to reflect and discuss the next phase of the campaign and reaffirm their commitment to the Global Coalition.

What did President Trump say?
President Trump marked the successes of the Global Coalition and its partners in retaking more than 20,000 square miles of land – almost all of the territory Daesh once controlled – and liberating millions of people in Iraq and Syria. He declared that the ‘struggle against terrorism is a shared fight’, and reaffirmed the commitment of the US to working with its partners to defeat every remnant of Daesh.

So does this mean Daesh is defeated?
No, sadly the job is not yet done – while Daesh has lost control of almost all of its territory, it continues to pose a threat. Daesh will likely revert to an insurgency in Iraq and Syria, and the Coalition is supporting partners through training and equipping security forces, to deny Daesh any space to act. Daesh’s trans-border networks and affiliates still exist, and Coalition members will continue to cooperate and share our resources to keep the world safe from Daesh attacks.

Where can I find out more?
The Ministers of the Global Coalition released this statement outlining where we are now, and what the next steps are to ensure Daesh’s enduring defeat.
You can keep track of the Coalition’s progress, and how liberated areas are being rebuilt, by following our Twitter handle @Coalition.