In the last 18 months alone, the combined operations of Iraqi forces have resulted in the killing or capturing of five of Daesh’s most senior leaders in Iraq (see image below). Strong co-operation between the various elements of the Iraqi Security Forces (ISF) have enabled it to deliver a number of demoralising blows to Daesh, placing the group under significant pressure.

“Through this unified effort we were able to achieve significant results and kill Daesh’s leaders…in less than two weeks, we killed more than 30 terrorists,” said Major General Tahseen al-Khafaji, Joint Operations Spokesperson in a recent interview with the Coalition. 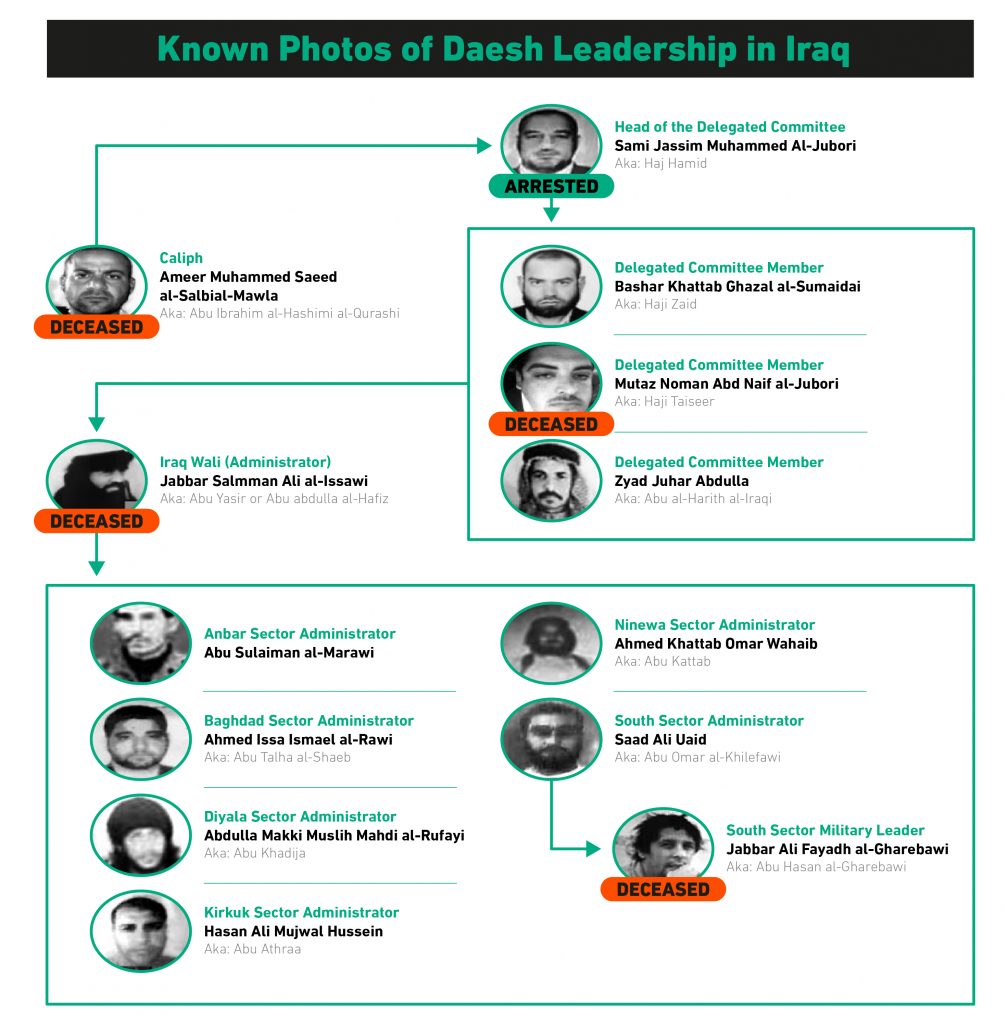 Two organisations within the ISF, the Counter-Terrorism Service (CTS) and the Iraqi National Intelligence Service (INIS), are focussed on removing senior Daesh leaders from the battlefield. Notable among the recent successful operations is the role Iraqi intelligence played in the recent US-led operation that resulted in the death of Daesh’s newest leader, Muhammad al-Mawla, also known as Abu Ibrahim Al-Hashimi Al-Qurayshi.

From the CTS raid in 2010 that resulted in the deaths of Daesh leaders Abu Ayyub al-Masri and Abu Omar al-Baghdadi, and the arrests of 16 terrorists, to its most recent successes, the rigorous high standards, top-quality training and professional military skills of the CTS have earnt it a reputation as one of the premier special operations forces in the region and the moniker ‘the Golden Division.’

The fully integrated approach developed between the CTS, the INIS and the elite Ministry of Interior counter-terrorism unit – nicknamed the Falcon Intelligence Cell – has meant there is no safe hiding place for Daesh within Iraq’s borders. But even when Daesh leaders hide outside Iraqi borders, there is no escape from justice: the CTS recently captured senior Daesh financier – and Abu Bakr Al-Baghdadi’s former deputy – Sami Jasim Muhammad Al-Jabouri in northern Syria. Al-Jabouri’s capture was recognised internationally as “one of the most significant counter-ISIS achievements in recent years,” and proof that there is no escape from the CTS and INIS.

Operations such as these not only remove dangerous individuals from the battlefield and in doing so seriously impede Daesh’s ever-decreasing ability to launch attacks, they also help the CTS gather vital intelligence. The recently killed leader of Daesh was only too willing to betray his associates. This intelligence is then processed by Iraqi intelligence forces to plan further operations, making the capture of Daesh leaders such a central pillar of CTS’ counter-terror campaign.

Daesh’s lack of integrity meant its operatives provided INIS with vital intelligence in early 2021 that enabled the ISF to launch an intelligence-led operation on the so-called ‘Wali’ or ‘governor’ of Iraq, Abu Yasser Al-Issawi, days after Daesh mounted a twin suicide bombing in Baghdad. Coordinated air strikes by the Iraqi Air Force supported by the Coalition resulted in the deaths of a further 10 terrorists. Mere days later, a second operation eliminated another senior Daesh leader, Abu Hassan Al-Gharibawi, along with a Daesh member who was responsible for transporting suicide bombers to Baghdad from hideouts in Al-Tarmiyah. The swiftness and effectiveness of these operations highlights how the CTS and INIS’ collaborative approach exploits Daesh’s failings and ensures the future safety of Iraqi civilians.

Despite these successes, the ISF will not rest. The head of the CTS, Colonel General Abdul-Wahab Al-Saadi, recently outlined his ambitions for the Service with the Chief of the Defence Staff of the Spanish Armed Forces, who agreed on the ongoing need to stand united in the face of terrorism and to eradicate its sources around the world. Faced with professional, well-equipped security forces, the future is grim for terrorists who remain in Iraq. The CTS and INIS will continue to hunt down those who seeking to harm Iraq and its citizens. With support from Iraq’s international partners in the Global Coalition there is no hiding place or safe haven for Daesh. The ISF will ensure they face justice.