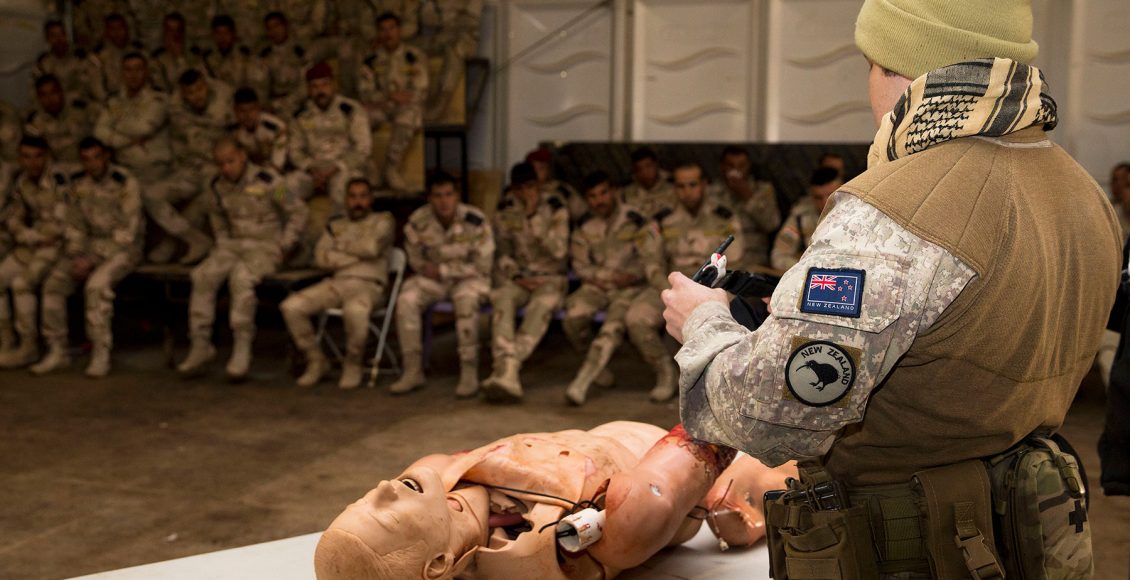 After giving a step-by-step guide on how to place a tourniquet, the Kiwi trainer picked out two Iraqi soldiers to demonstrate what they had just learnt before the entire class.

“It may take a few minutes or several hours before they are evacuated from the battlefield. So if they are able to stop the bleeding, they gain time to save their or their friend’s life,” he explained in an interview recently.

“The tourniquet can spell the difference between life and death when these soldiers are on the front lines. Just as important as their flak jackets and helmets, the tourniquet is lifesaving equipment and every soldier must know how to use it”, he said.

Use of the tourniquet is only one of the basic lifesaving skills Iraqi soldiers learn from Task Group Taji, the combined Australian-New Zealand training force based at Taji Military Complex northwest of Baghdad. They are also taught how to administer CPR (mouth-to-mouth resuscitation), treat gunshot wounds and insert a tube into the nose to secure an open airway.

Frowned upon in previous years because of fears it could cause long-term limb damage, the tourniquet has seen a revival on battlefields when they were proven to raise sharply the odds of survival in recent conflicts in Afghanistan and Iraq.

“Stopping catastrophic haemorrhage is crucial in saving lives on the battlefield and it’s one of the easiest things to teach. Giving the ISF the skills to apply the tourniquet will definitely save lives”, the New Zealand Army medic explained.

“When the Iraqi soldiers go to the front lines to fight Daesh, getting professional help may be hours away. So knowing basic first aid like applying a tourniquet is very important and can increase their and their colleagues’ chances of survival”, he added.