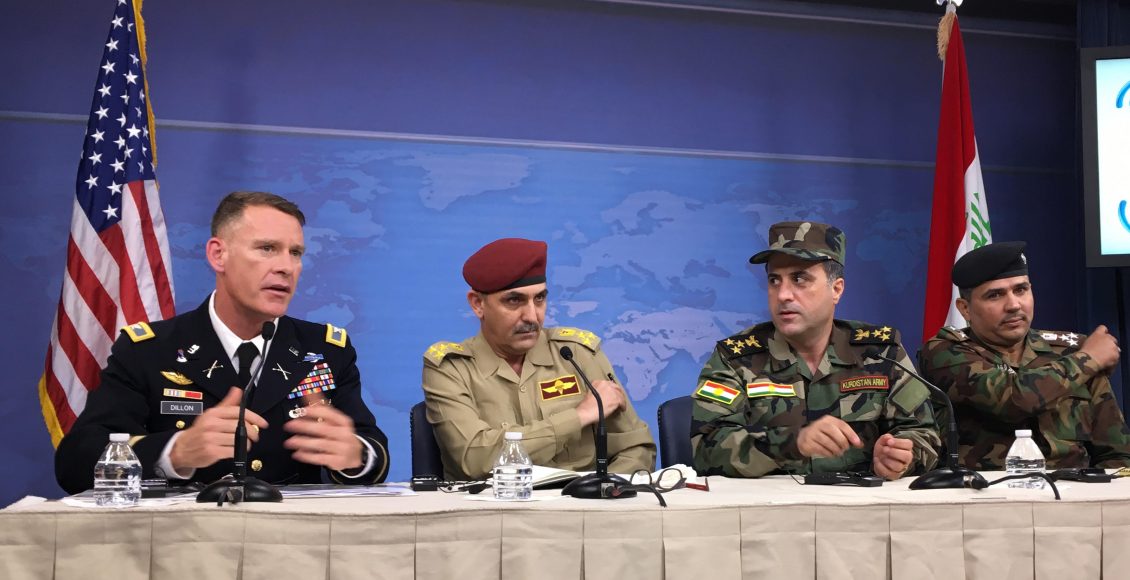 Thank you, everybody, for coming today to hear about the Coalition’s efforts to defeat Daesh in Iraq and Syria. First off, on behalf of the Combined Joint Task Force, we want to extend our condolences to the families of loved ones who were recently lost in the attack in Manchester on Monday. This deadly attack reminds us why we must defeat ISIS. Where in the world is it acceptable to purposely target civilians, to target innocent teenagers at the start of their lives? ISIS and their twisted ideology must be stopped. The defeat of ISIS is an international effort of 71 partners, including the newest members, NATO, Ethiopia, and Djibouti. This coalition is fully committed politically, and militarily, to destroying our common enemy. Our coalition continues to grow as, together, we continue making progress is rolling back Daesh and their control of territory and dismantling their networks.

Today, I will give you an update on the military efforts toward defeating ISIS, and we’ll start in Iraq and then we’ll to Syria. The Iraqi security forces continue making steady progress as they close in on the remaining three ISIS-held neighborhoods of West Mosul. The remaining ISIS fighters hold less than 10 km2 of the city, and we know the final kilometers still remain a challenge, and will be very difficult to clear. The Iraqi security forces face a desperate enemy in the tightest and toughest areas that they have cleared so far in this campaign. West Mosul is arguably the most complex and dangerous combat urban environment that any force has seen in decades. The Coalition has continued support to Iraqi security forces with 34 strikes in the past week, hitting snipers, machine gun fighting positions, mortar systems, vehicle-borne improvised explosive devices, and factories for producing and making car bombs. And with the car bomb threat in mind, the government of Iraq has directed citizens not to use cars or motorcycles to avoid being mistaken for a militant, and this is necessary because the VBID, or the car bomb threat, has been the enemy’s weapon of choice in Mosul.

Every day, through you and your fellow journalists reporting in Mosul, we hear of the harrowing stories of residents who have successfully vacated the city. They tell of others who are not as lucky, those who have either been shot by ISIS snipers as they try to flee, or those held by ISIS as human shields or herded into buildings where ISIS will attempt to draw fire from Iraqi forces or Coalition strikes to cause massive casualties. The enemy has known for some time that they will not win the battle of Mosul, and their goal in these tactics is to harm as many as possible and to prevent life from returning to normal after they have been destroyed. The battle of Mosul has been long and arduous. Our Iraqi partners have fought bravely and innocent civilians have suffered. Very soon, ISIS will lose the largest stronghold they have ever had, and the black flag of ISIS will soon be replaced by the Iraqi flag over all of Mosul.

Moving to Syria, after the Syrian Democratic Force’s liberation of Tabqa City and the critical dam, our partner forces continue to focus on the safety of civilians by clearing improvised explosive devices, booby traps, and obstacles in and around the city. This week, several trainees graduated from the Syrian Democratic Force’s basic training in Syria, and these graduates have committed to the fight against Daesh because #1, they have seen the SDF and their successes against ISIS in the previous battles, and they also refuse to live under ISIS control ever again. These recruits and volunteers trained – they were trained on small unit tactics, counter-IED procedures, and basic weapons familiarization, and they will use these skills to either secure their home communities, or to participate in the march toward Raqqa. Throughout the Raqqa valley, the SDF continues to take terrain from ISIS. More than 400 km2 were gained in this last week and the SDF continue to tighten the noose around ISIS, advancing on Raqqa, closing that isolation ring. They are currently poised about 3 kilometers from Raqqa City to the North, to the East, and they are just outside of the Baath Dam to the West.

The Coalition continues to service ISIS targets with precision airstrikes and artillery strikes as the enemy attempts to build up their defenses in preparation for the battle in Raqqa. The Coalition conducted 67 airstrikes – or strikes, rather, excuse me – this past week, hitting fighting positions, bulldozers, excavators, artillery systems, and command and control nodes, among others, and I assure you the Coalition is not going to allow ISIS a permissive environment to dig in and prepare for the assault and the inevitable liberation. While focused on Raqqa, the Coalition also continues to find and strike ISIS leaders wherever we find them. Abu Asim al-Jazeri, an ISIS external organizations planner and Syrian-based French Algerian ISIS fighter was killed by a Coalition airstrike on May 11, near Mayedin in Syria. al-Jazeri was involved in training a new generation of ISIS youths, a high-priority training program sanctioned by ISIS leadership. The death of al-Jazeri removes another senior foreign fighter with extensive experience and training abilities, and this strike is significant because the enemy is trying to indoctrinate children into their ideology and tactics. They are trying to create a generational problem, so disrupting that effort, and liberating population centers is very important to the long-term defeat against Daesh.

Mustafa Güneş, a Syrian-based ISIS external operations facilitator from Turkey, was killed by a Coalition airstrike on the 27th of April, also in Mayedin. Güneş was linked to facilitating financial support for planning external attacks outside Syria and Iraq against the West. His death disrupts facilitation efforts between plotters in Syria and their Turkey-based networks.

And finally, Abu Khattab al-Ral, a senior ISIS military official, was killed during an operation near Al-Qa’im, Iraq, on the 18th of May, along with 3 other terrorists. al- Ral was responsible for coordinating drone operations and procurement in Al Anbar province in Iraq. His death will degrade ISIS drone network’s ability to attack and harass our partner forces on the ground, and will continue to degrade, disrupt, and dismantle ISIS structure, as well as exert more pressure on its senior leaders and associates across multiple networks throughout Syria and the Iraq battlefield.

The deaths of these ISIS leaders ultimately disrupt their ability to plan and conduct attacks on civilian targets outside of Iraq and Syria. In Iraq and Syria, our partner approach has yielded success. Almost 60,000 km2 of the area once held by ISIS has been retaken by our partner forces, and more than 4,000,000 of the citizens have been liberated, and ISIS has not been able to take any of that territory from Coalition partners since the beginning of this campaign. And together, as a strong coalition, and with our Iraqi and Syrian partner forces, we have retaken ISIS-held territory, eliminated most of ISIS’ leadership, limited their freedom of movement into and out of the region, reduced their financial resources, and weakened their credibility.

And despite all the progress our partner forces have achieved to retake ISIS territory, and even after ISIS’ defeat in Mosul and Raqqa are complete, there’s still a lot of work that needs to be done. With a strong, growing, committed coalition, we will keep the pressure on to defeat ISIS.

What do students in Diyala love the most about school