The Coalition congratulates our Syrian Democratic Forces partners on their announcement of the liberation of Raqqa, Syria, from Daesh occupation Oct. 20. Daesh’s loss of Mosul and now Raqqah are turning points for the terrorist organization whose leaders grow ever more distant from a dwindling number of terrorist adherents. 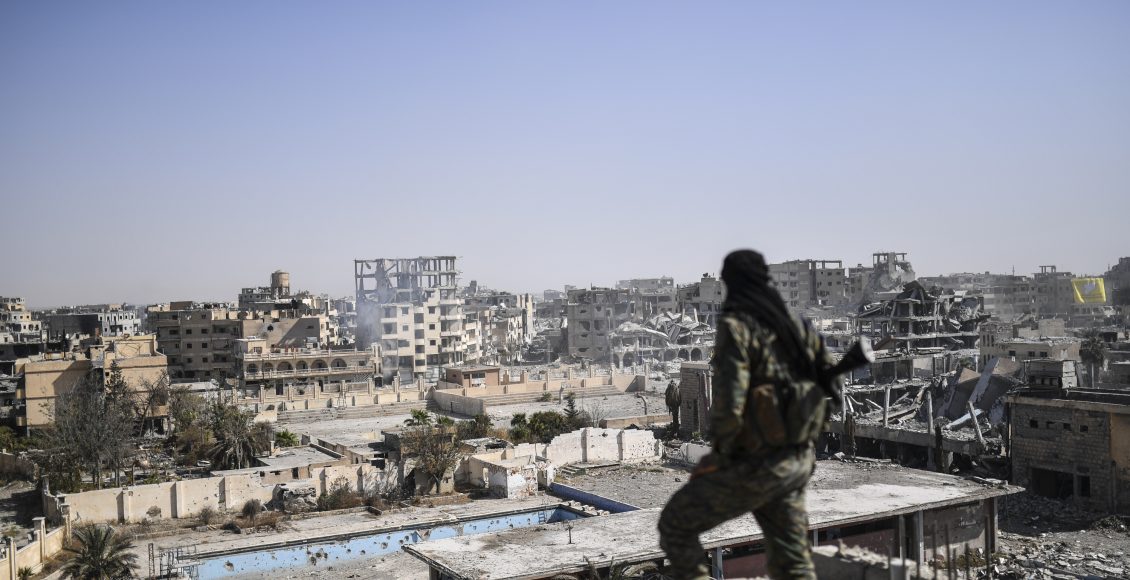 A fighter of the Syrian Democratic Forces (SDF) stands guard on a rooftop in Raqa on October 20, 2017, after retaking the city from Islamic State (IS) group fighters. - SDF fighters flushed jihadist holdouts from Raqa's main hospital and municipal stadium, wrapping up a more than four-month offensive against what used to be the inner sanctum of IS's self-proclaimed "caliphate", which for three years saw some of the group's worst abuses and grew into a centre for both its potent propaganda machine and its unprecedented experiment in jihadist statehood. (Photo by BULENT KILIC / AFP)

Raqqa was occupied by Syrian opposition forces in 2013 and was embroiled in a destructive civil war before being seized by Daesh in January 2014, at which time the city was declared the capital of the terrorist group’s so-called “caliphate.”

During the civil war in Raqqa, the local population lived in a cross-fire of destruction brought about by continuous conflict between the Syrian regime and the opposition. Under Daesh, Raqqa became a magnet for foreign terrorists. Residents were forced to live under a brutal regime that routinely carried out public executions, extortions billed as “taxation,” and forced conscriptions.

Daesh used its three-plus year occupation to convert Raqqa into a fortified military prison. The terrorist organization used hospitals, mosques, schools and otherwise-protected sites as cover for the planning, execution and support of military operations. Daesh also committed violations of human rights for which individuals will be held accountable. Raqqa was a key location for Daesh’s planning, financing, execution, or inspiration of terrorist activities throughout the world, including attacks in Paris, Brussels, Nice, Manchester and many others.

The fight to liberate Raqqa commenced with Coalition Strikes against Daesh in support of the ground assault by Syrian Democratic Forces June 6. By Sept. 3, SDF had made significant gains and secured the Ancient Mosque in the old city center. This prevented the mosque from succumbing to the same fate as the Al Nuri Mosque in West Mosul, Iraq, which Daesh terrorists destroyed in June 2017.

“An ethnically diverse force with local elements leading the fight, the SDF conducted a highly effective, professional operation in a difficult urban area to free the city,” said Coalition director of Operations, Brig. Gen. Jonathan Braga. “They fought tenaciously and with courage against an unprincipled enemy, taking great care to move the population trapped by Daesh away from the battle area and minimize civilian casualties,” said Braga.

Throughout the fight for Raqqa, the Coalition provided – and continues to provide – training, equipment, advice, assistance, intelligence, air and ground fires support to decisively defeat Daesh. The liberated city will return to local governance and leadership. Raqqawis now have a chance to control their own future.

While symbolic, the SDF’s liberation of Raqqa does not mean the end of Daesh terrorism. “The military defeat of Daesh is essential, but not sufficient,” said Coalition commander Lt. Gen. Paul E. Funk II. “We are still fighting the remnants of Daesh in Iraq and Syria, and will continue to facilitate humanitarian efforts assisting citizens adversely affected by a brutal occupation, who face a long battle to gain their freedom,” said Funk. “A tough fight still lies ahead.”

We honor the valor and considerable sacrifices of our Partner and Coalition Forces in this epic struggle to rid the region of violent extremism. Coalition and partners forces remain fully committed to the permanent defeat of Daesh in Syria and Iraq.