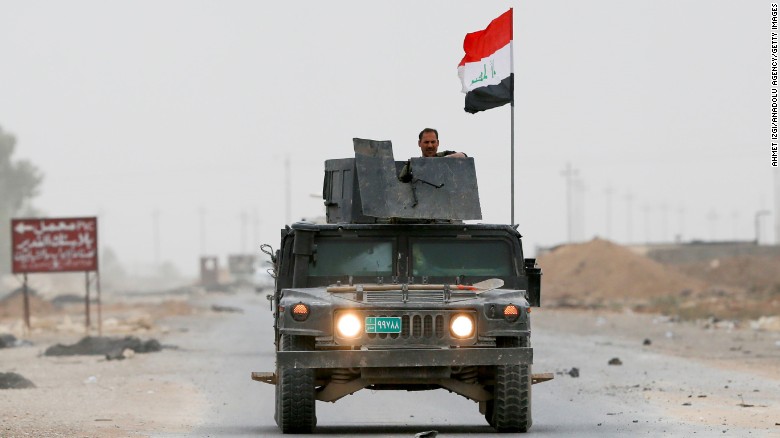 The Army forces of the 9th armored Division and the federal police of the emergency response forces, 3rd Division, 5th Division and 6th Elite Division and PMF of Abbas combat forces progressed toward its targets to liberate Mosul right side supported by Army aviation, IAF and IC fighter jets, according to the following axes:

1. The axis of federal police: The federal police forces and the emergency response progressing and stormed Albu Saif village and liberated it completely, clearing the liberated buildings, the forces destroyed Vehicle-Borne IED, Motor Cycle and seized many weapons and ammunitions, and found Daesh tunnels

2. The axis of the 9th Armored Division: The forces liberated Lazaka village in southwestern Mosul right side and liberated Sahaji village in cooperation with Abbas combat Division. The forces completed its task by liberating the targets of the 1st stage of the 3rd phase, destroyed three Vehicle-Borne IEDs, two mortar shells, bombed 10 explosive belts, and destroyed two motorcycles.

3. Abbas combat Division and 36th Brigade of the 9th Division: The forces liberated Sahaji village in cooperation and coordination with 9th Division, destroyed Vehicle-Borne IEDs, two motor shell units, two vehicles carrying machine guns and killed many Daesh terrorists. The federal police, the emergency response, the 9th armored Division and Abase combat Division completed its targets in the 1st stage of the 3rd phase of “We are coming Nineveh”

In the past 24 hours, the Coalition conducted five strikes with a total of 50 engagements using 152 munitions.

— Near Bayji, one strike engaged an ISIS tactical unit; destroyed 11 vehicles, a front-end loader and a weapons cache; and damaged a bridge.

Back to school in Baashiqa