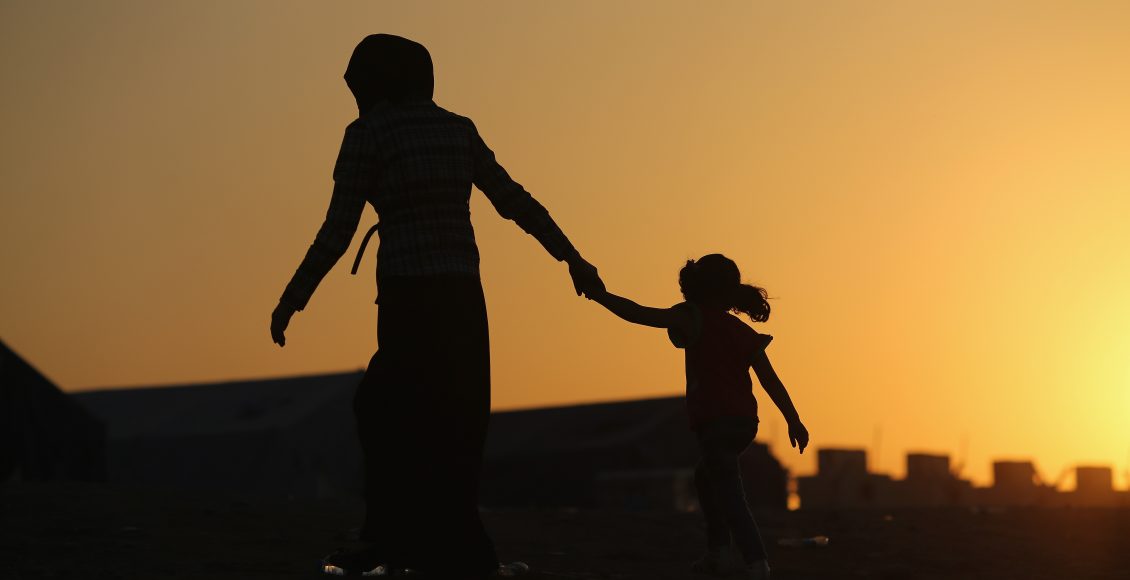 KALAK, IRAQ - JUNE 14: Families arrive at a Kurdish checkpoint at sunset next to a temporary displacement camp on June 14, 2014 in Kalak, Iraq. Thousands of people have fled Iraq's second city of Mosul after it was overrun by ISAS (Islamic State of Iraq and Syria) militants. Many have been temporarily housed at various IDP (internally displaced persons) camps around the region including the area close to Erbil, as they hope to enter the safety of the nearby Kurdish region. (Photo by Dan Kitwood/Getty Images)

Daesh has pursued a policy of confiscating properties owned by ‘absentee’ landlords, which are often occupied by refugees or poor families. Indeed, many wealthy families that have fled Daesh territory allowed poor families to occupy their homes for nominal rents, in order to preserve their claim on the property should Daesh later be driven out. In turn, Daesh has claimed that these absentee landlords have chosen to travel to “the Lands of Kufr” and their property is therefore forfeit. The practical effect of this policy is that Daesh frequently confiscates property from poor families and gives it to fighters, especially foreign fighters. This contradicts Daesh’s assertion that Muslims must perform hijra (migration) to the “Caliphate” to defend the Muslims of Syria from outside oppressors; the foreign fighters have become the oppressors.

Daesh requires registration of property, facilitating future confiscations if registration is not done properly or is deemed incorrect. Numerous examples of confiscation have been reported using this method since February.

Daesh are reported to have confiscated homes from local families specifically to give to foreign fighters.

Daesh evicted several families from residential buildings in Boqruss, Dayr al-Zawr, with no known justification, throwing poor families out onto the street.

Daesh imposes collective punishments on families to force them to inform on and police each other’s behaviour, making every family member a potential informant inside the home. The law especially forces male “guardians” to impose Daesh’s strict clothing requirements on their wives and daughters to avoid lashings and heavy fines.

Extortion of money for minor penalties. In February, Daesh sentenced a young man to serve a short jail sentence. However, after discovering that the father of the young man was wealthy, Daesh changed the ruling and forced the father to pay “10 grams of gold,” for the release of his son.

Death sentence for helping a woman escape. A 15-year-old boy was sentenced to death by Daesh in March for helping his sister-in-law escape to regime-controlled territory in Dayr al-Zawr City. The boy’s brother (the woman’s husband) was reportedly an Al Nusra Front fighter who left the city as Daesh moved in.

Desperate Measures. Before they lost control of the city, Daesh members surrounded a neighbourhood in western al-Bab City after a Daesh member threatened to detonate a suicide vest, after Daesh security forces arrested his son for allegedly helping outside groups (he had been accused of being a spy). This example shows desperation of those who have had their families ripped apart by Daesh ‘justice’.

Daesh pressures families to encourage their young sons to join the group, frequently sending them to other regions to prevent desertions.

Daesh have ordered preachers in Raqqa City and Dayr al-Zawr City to use their sermons to encourage all men capable of fighting to join Daesh fighting units and to urge families to pressure their sons to join Daesh.

Before Daesh were driven out of al-Bab City, a court informed a local family that two of their teenage sons had died in a battle in Hasaka province. The boys had been recruited over one and a half years ago, when they were aged 14 and 15, before they were then moved to the frontline some distance away to prevent them from deserting.

Why Baghdadi’s recent speech shows that he recognises the terror group is “on the brink of defeat”.

With improved security and stability, people in Salah al Din can now focus on…