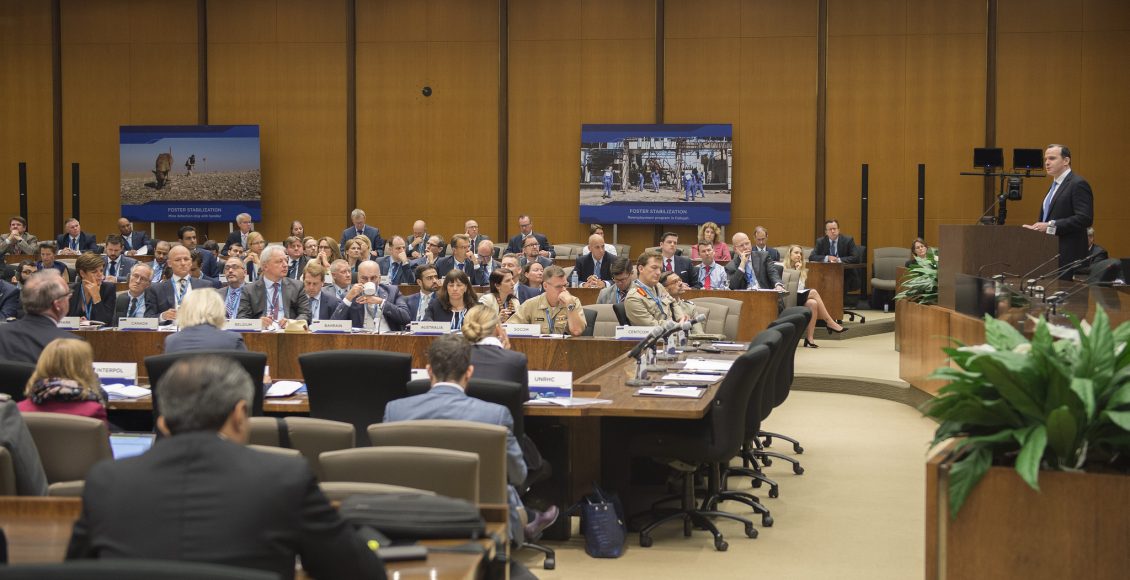 To mark this month’s gathering of our 73-member Global Coalition to Defeat Daesh here in Washington, I again congratulate the Government of Iraq, Iraqi Security Forces, Kurdish Peshmerga, and the entire Global Coalition on the liberation of Mosul. Prime Minister Abadi’s announcement of Iraq’s victory in Mosul was a significant milestone in the global fight against Daesh. Together, we have come a very long way – but there is more to do.

During its occupation of Mosul, Daesh destroyed many of the city’s religious and cultural treasures, including the al-Nuri Mosque and the Tomb of the Prophet Jonah. Daesh used mosques, schools and hospitals as bomb-building facilities and fighting positions. It committed acts of genocide, enslaved women and girls, and held civilians as human shields in the Old City. In the final weeks of the battle in the Old City, hundreds of foreign fighters from around the world barricaded themselves in homes wearing suicide vests and murdering anyone who tried to leave.

Iraqi forces prevailed because of their courage and determination to retake their country from these terrorists, enabled by Coalition training and support, which we are prepared to continue. To date, we have trained over 100,000 members of the Iraqi Security Forces, and these Coalition-trained units have never lost a battle. We will continue this training support as Iraqi forces pursue Daesh terrorists and restore sovereign control over all Iraqi territories. We will also continue to encourage the Iraqi government to hold security units to the highest standard of the law and investigate allegations where individuals fail to meet that standard.

These military successes came in parallel with an unprecedented humanitarian response. Our Coalition planned for six months with the Iraqi government before military operations launched to care for up to 1 million displaced civilians during the Mosul campaign. To date, more than 930,000 civilians have fled the fighting, and all of them received shelter and assistance. Our focus with the Iraqi government and United Nations on immediate stabilization programs has allowed more than 225,000 to return to their homes, and 350,000 children to return to school. Nationwide, over 2 million Iraqi civilians are back in their homes in areas liberated from Daesh. This is an unprecedented rate of returns for a post-conflict environment.

As I emphasized throughout our meetings, while these achievements are remarkable, we must ensure they are lasting. There is more to do, and investments now will carry dividends later to help maintain the rate of returnees to their homes in liberated areas. The UN has highlighted the need for a further $560 million to address humanitarian needs in Iraq nationwide. The UN has also requested additional investment in stabilization programs, to include $707 million in western Mosul, $174 million for eastern Mosul, and $232 million in other areas of Iraq.

Across the border in Syria, our coalition is supporting intensive operations by the Syrian Democratic Forces to liberate Raqqa, with over 40 percent of the city now cleared of Daesh terrorists. The accelerated military campaign to liberate Raqqa means we must redouble our efforts to identify, coordinate, and fund stabilization projects. The United Nations needs $140 million in additional humanitarian assistance for its Raqqa response, and we estimate over $50 million will be required for explosive hazard removal. Coalition partners can contribute to these initiatives through a number of means, including the new Consortium for Early Recovery in Liberated Areas, established this month under our Stabilization Working Group, or to the Syria Recovery Trust Fund (SRTF), which supports essential services recovery in Raqqa.

The United States is already responding to these challenges. In the last month, we announced a further $119 million for humanitarian assistance in Iraq, $150 million for stabilization programs for Iraq, and $20 million for the SRTF. Many of you confirmed your own pledges during our meetings this month. We ask that all members of the Coalition consider where your assistance can have immediate impact. As always, my team can work with yours to identify specific projects – from de-mining, to water, electricity, sewage, rubble removal, agriculture, and schools – ready for Coalition support. For those of you making a military contribution in Iraq and Syria, our Department of Defense will be soon be in touch about the next phase of our campaign.

Beyond Iraq and Syria, our meetings also focused on countering Daesh finance, foreign fighters, and messaging. These sessions produced a number of ideas to strangle Daesh networks globally as their physical space in Iraq and Syria recedes. Google, the Middle East Broadcasting Center, and other companies joined our sessions on countering Daesh propaganda and messaging. This is truly a cooperative effort between our Coalition partners, international organizations and the private sector, and we will look to enhance such engagement through the second half of this year.

Our Coalition continues to grow. In recent weeks, we have welcomed Djibouti, Chad, Niger, and Ethiopia, bringing our total membership to 73, including 69 countries and four international organizations – NATO, EU, INTERPOL, and the Arab League. Our newest members have helped orient our focus on the extremist networks on the African continent, and we must work together to sever the weakening connections between the ISIS core in Syria and Iraq, and its global affiliates in Africa, East Asia, South Central Asia, or anywhere else ISIS seeks sanctuary.

On behalf of President Trump, Secretary of State Tillerson, Secretary of Defense Mattis, and our entire National Security Team, I want to thank you again for participating in the meetings here this month. I also thank you in advance for all that we will continue to do together as a part of this historic and growing Global Coalition to Defeat Daesh.

The UK ‘s contribution to electricity in Iraq