Le Monde’s Leadership Against Daesh Propaganda of the Deed 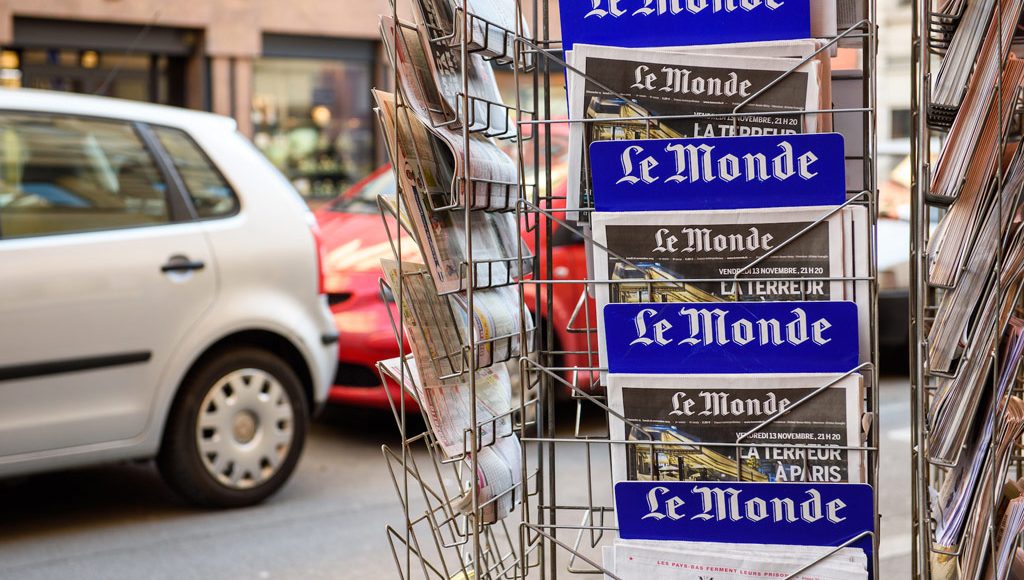 We have to remember what the absolute operational imperative and essence of modern terrorists and terrorist organisations are – as the counterterrorism expert Brian Jenkins identified in 1975, it is “a lot of people watching, not a lot of people dead.”

That may be hard to square with the current global jihadist insurgency we are facing, in which 75 attacks have killed over 1200 people in the last 55 days in 22 different countries. But beyond the devastating loss of life, jihadist terrorists have had their brands, motives, ideologies, and symbols projected around the world as the global media has covered each of those attacks and the subsequent debates.

This is Propaganda of the Deed (POTD). Originating doctrinally in the 19th century anarchist movement, POTD, was the acknowledgement that to generate popular insurrection and civic mobilisation, that insurgents needed to dominate news headlines. The best way to do that, was through violent imagery, violent stories and deeds so terrible, that publishers would not be able to resist but circulate them and sensationalise them. POTD became informational shotgun blasts into passive audiences and communications conduits, prompting both fear, disgust and in places, admiration and support. However, the anarchist movement failed as penny a paper publications and the states monopoly on communications restricted POTD insurgency from reaching new audiences and internationalising.

All of this has changed with the communications revolution and what we now see is a renaissance of POTD-led insurgency. Disparate insurgencies are now international spectacles as instant connectivity creates global swarms of information which not only influences and directs disparate conflicts, but has direct battlefield implications. Communities can be warped and drawn into highly local conflicts thousands of miles away, through the creation of virtual ‘second fronts’, feeding, sustaining and globalising regional conflicts from the Maoist principle of national insurgency, into the global.

Daesh has taken this model and used it with terrifying results and now resembles a media organisation with a terrorist wing and not the other way around. With a coordinated response from the Global Coalition, and good work from civil society organisations all around the world to counter Daesh narratives and present alternatives, the tide seems to be turning. Social media firms are now getting better and better at removing and combating Daesh propaganda on their platforms. Though impossible to completely remove and Daesh and it has metastasized into other platforms and digital spaces, potential recruits now have to actively search and dig for content instead of being directly targeted. Coupled with coalition progress on the battle field and a dwindling number of foreign terrorist fighters leaving Europe to Iraq and Syria, it would seem we are winning.

Though we have a coordinated response to the 38 pieces of propaganda that Daesh were producing and disseminating online daily, there is only now a debate emerging about how to combat the other sort of Daesh propaganda – Propaganda of the Deed – and, if anything, the media is faithfully reproducing material that serves to strengthen the global jihadist insurgency.

Though Daesh is at its weakest militarily, it is at its strongest ideologically. We’re seeing an inadvertent celebratisation of terrorists which is deeply appealing to extremists and potential fighters. Detailed profiles of terrorists, violent imagery of their attacks, their martyrdom videos and a constant frenzy of media activity turns isolated pinprick attacks into national emergencies.

Only recently, pictures of the Nice killer, Mohamed Bouhlel, have been circulated with him shirtless and flexing on the beach. This adds little to the news, or the duty of informing the public of world events. Further back, we can be reminded of the tabloid barrage of Mohammed Emwazi, brazenly taunting the West with soon to be beheaded hostages – we were guilty of turning him into some sort of Che Guverra of the jihadi world. One of the Boston bombers , Dzhokhar Tsarnaev, was put on the front page of the Rolling Stones magazine with the title: ‘The Bomber’ – adding to a cult of personality around terrorist killers and signalling to other potential terrorists that they will receive the attention they crave.

The press have a duty to inform the public; they should not, however, play directly into the operational strategy of terrorist organisations. It is, however, inappropriate for governments in democratic states to restrict press freedom, even in apparent moments of national emergency. So what should we do?

The French newspaper Le Monde and other leading French media houses have taken a leadership role within the industry to exercise their own responsibility and make a free speech decision not to print photos of terrorism or its perpetrators. This is an historic decision, and a debate we should welcome. By denying terrorists publicity and by being highly selective on a case by case basis on what imagery to publish and what aspects of the story to release, we can dramatically reduce the unseen effects of terror and unhinge POTD from Daesh’s strategy. Mainstream media is one of the last effective communications assets which are available to Daesh to try and use and to remain relevant and strangulating their grip over this is essential.

Moreover, Le Monde has shown that different civil society stakeholders have different counter-extremism roles, and can take their own initiative. Just as teachers, NGOs and religious leaders have played a positive role within this full spectrum strategy, so too is there a role for the media. I hope that Le Monde’s decision prompts others to follow suit.

Jonathan Russell is the Head of Quilliam’s Policy and Communications Department. Jonathan joined Quilliam in 2012 and now looks after several of Quilliam’s programmes and its relations with policymakers. Joshua is Strategic Communications Office at Quilliam, where he looks at developing new communications initiatives to combat extremism and terrorism, and coordinates FATE Europe.

This article is part of a new Opinion series, written by experts from around the world. These views do not necessarily reflect those of the Global Coalition.

From the frontlines of the Internet: Iraqis Resist Daesh Online

Coordinator for Counterterrorism Ambassador Nathan A. Sales Travels to Qatar