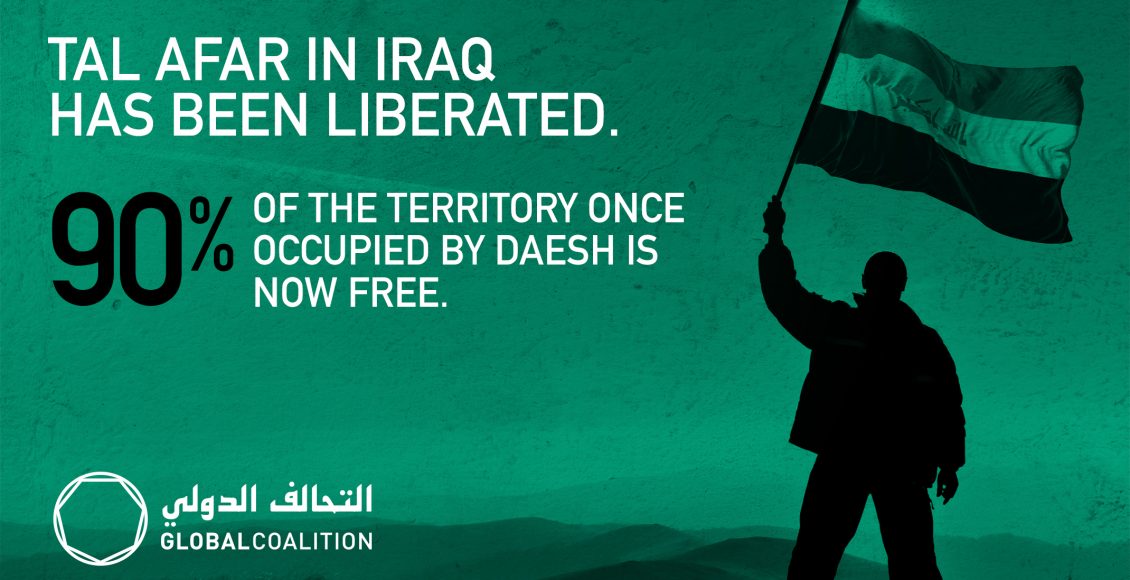 Under the command of Prime Minister al-Abadi, all branches of the Iraqi Security Forces took part in the liberation of Tal Afar – the 9th, 15th and 16th Iraqi Army Divisions, the Counter Terrorism Service, the Federal Police and Emergency Response Division, Iraqi Local Police, the Popular Mobilization Forces as well as the Kurdish Regional Government Peshmerga.

While the city and critical infrastructure are under ISF control, dangerous work remains to completely remove explosive devices, identify ISIS fighters in hiding and eliminate any remaining ISIS holdouts so they do not threaten the security of Tal Afar in the future.

“Following their historic liberation of Mosul and now a swift and decisive victory in Tal Afar, the ISF have shown, once again, they are an increasingly capable force that can protect the Iraqi people, defeat ISIS within Iraq and secure the country’s borders,” said Lt. Gen. Stephen Townsend, the commander of U.S. and Coalition forces in Iraq and Syria. “This is yet another significant achievement for the Iraqi Security Forces and the government and people of Iraq.”

The Coalition contributes to the defeat of ISIS by providing Iraqi forces with equipment, training, intelligence, precision fire support and military advice to leaders. By working by, with, and through the government of Iraq and the ISF, the Coalition has enabled the Iraqi Security Forces to reclaim 90 percent of their land from ISIS. The Coalition will continue to support the government of Iraq and Iraqi Security Forces as they fight on to defeat ISIS in Western Anbar province and Hawijah.