Global Coalition statement on the Liberation of Mosul

The Coalition welcomes Prime Minister al-Abadi’s announcement of Iraq’s victory in Mosul and we congratulate the Iraqi Security Forces on their remarkable progress in defeating Daesh. 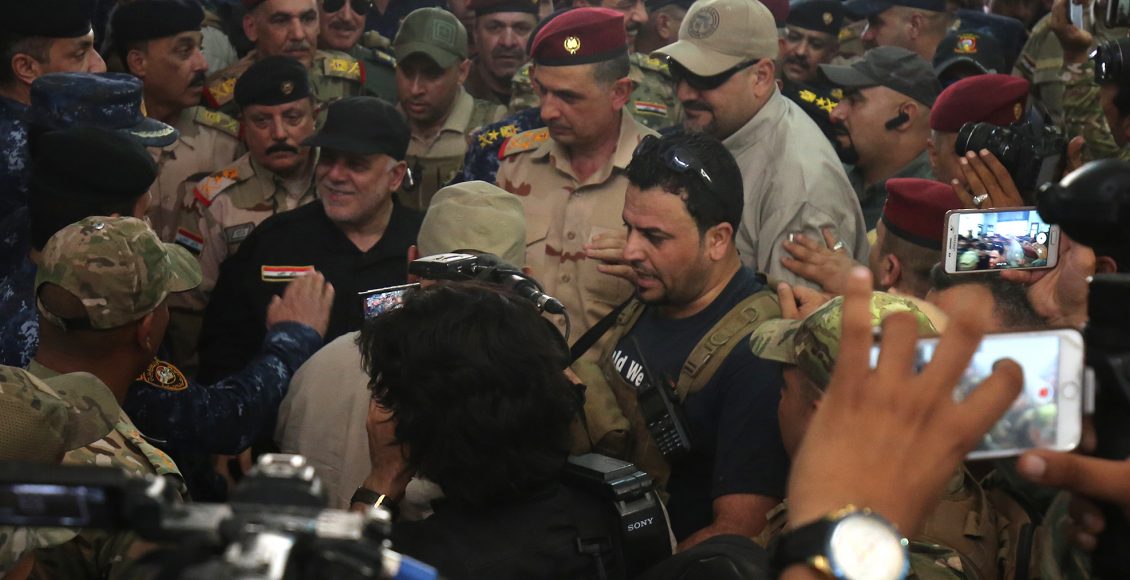 Iraqi Prime Minister Haider al-Abadi (L) arrives in the al-Tayaran neighborhood of Mosul on July 9, 2017 to meet with military commanders after the government's announcement of the "liberation" of the embattled city. - Abadi's office said he was in "liberated" Mosul to congratulate "the heroic fighters and the Iraqi people on the achievement of the major victory". (Photo by AHMAD AL-RUBAYE / AFP)

As Prime Minster al-Abadi has said, there is still work to do to stabilise the city, rebuild infrastructure and clear Daesh cells. However, the ISF now have Mosul firmly under their control.

“The Global Coalition congratulates Prime Minister al-Abadi and the Iraqi Security Forces on their historic victory against a brutal and evil enemy. Make no mistake; this victory alone does not eliminate Daesh and there is still a tough fight ahead. But the loss of one of its twin capitals and a jewel of their so-called ‘caliphate’ is a decisive blow,” said Lt. Gen. Stephen J. Townsend, Commanding General of Combined Joint Task Force – Operation Inherent Resolve.

“Mosul would have been a challenging fight for any army and the Coalition is proud to stand side-by-side with our Iraqi partners as they celebrate their hard-fought victory. A victory that has cost the lives of many brave Iraqis; soldiers, police and civilians. People of all ethnicities and sects have suffered and sacrificed together, not only for their own country, but to help provide security to the region and the world,” said Townsend.

“This victory does not mark the end of this evil ideology and the global threat of Daesh. Now it is time for all Iraqis to unite to ensure Daesh is defeated across the rest of Iraq and that the conditions that led to the rise of Daesh in Iraq are not allowed to return again,” said Townsend.

During its occupation of Mosul, Daesh destroyed many of the city’s religious and cultural treasures, including the Great Mosque of al-Nuri and the Tomb of the Prophet Jonah. They terrorised and brutally murdered thousands of civilians, including scores of women and children. Daesh used mosques, schools and hospitals as bomb-building facilities and fighting positions; but in the end, Daesh was still defeated.

Although Daesh has lost Mosul, the threat remains in other areas of Iraq. The Coalition will continue to provide military, humanitarian and stabilisation support to the Iraqi Government as they work to deliver the political reform, national reconciliation and basic services that all Iraqis want and deserve.

From the frontlines of the Internet: Iraqis Resist Daesh Online

An eyewitness sharing her story