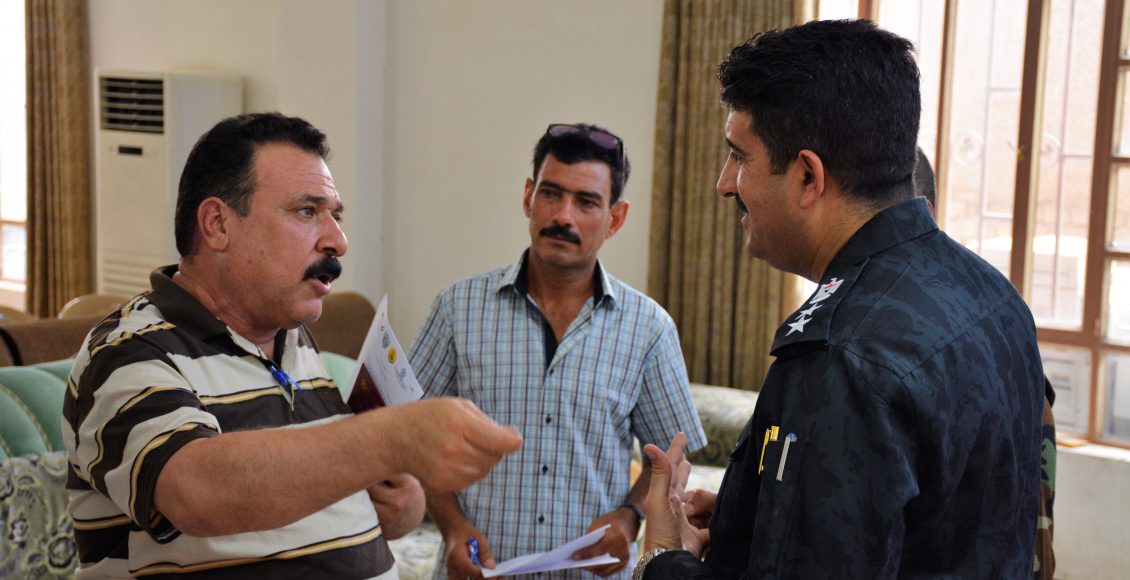 When Khalil al-Jobory escaped Daesh, he found setting up a new home in Tikrit far more complicated than he expected. Having fled from an area that was under Daesh control, he needed 10 different references for the security forces to consider him a non-threat.

“It took over a month,” he says, describing the process of obtaining the signatures.

Thanks to the Community Policing project, internally displaced persons now need only four such references to obtain security clearance. The IOM, working working at the request of the Iraqi government and with German financial support, set-up the project.

“My relatives now also feel they can come here,” al-Jobory says. “I wish we had police like this all over Iraq.”

The concept of Community Policing is meant to restore trust in the State and the Iraqi government among people in areas that have been liberated from Daesh. The idea is that Community Policing will enable Iraqis to experience police officers serving their communities, providing support to local people and helping returnees to overcome their fear of conflicts.

The initiative is part of a package of more than 50 projects in Iraq being coordinated and funded by the German foreign office, which has provided 290 million Euros in funding for Iraq in 2017 alone.

Stabilising the situation in Iraq and helping local people are not merely humanitarian imperatives and part of global responsibility for peace. They also make it easier for internally displaced persons to stay or return home.

Most Iraqis want to return home, even under the most difficult circumstances, says Placido Silipigni, project manager of IOM, which is carrying out the German-funded Community Policing in Iraq. Silipigni stresses that security is the crucial aspect for people.

“If you don’t have a certain level of security, you won’t have economic growth. And then people lose hope and look for alternatives,” he says, pointing to displacement and forced migration as potential side effects of such a situation. A functioning police force is the key to greater trust and improving options for people to stay in the country.

“A police officer’s uniform stands for the state,” Silipigni says. “The uniform should say: ‘We are here to protect you and to guarantee freedom for everyone.’”

Silipigni and his team put a lot of effort into choosing the police officers who will take on a community-policing role. These officers need experience and training as they need to be able to mediate between host communities, IDPs and returnees, reducing mutual suspicion and recognising and defusing tensions before they turn into conflict.

Their work can also involve organising a safe route for children to travel to school during a wave of attacks by terrorists or ensuring that teenagers whose families face hardship do not drift into crime.

Another area where they are heavily active and where training and experience are required is in chairing Community Policing Forums where representatives of municipalities and the security authorities meet to discuss urgent problems and find solutions.

The Forums address problems that are otherwise never discussed in public as well, such as domestic violence and who can help in such cases.

“Showing that the police are also there to help weak and vulnerable people in society sends an extremely important message,” Silipigni says. Community Policing Forums are meanwhile seen as a neutral authority. “That in itself is a huge step forward,” he says.

The man working to keep pottery alive after Daesh

An Iraqi musician is playing her part in tackling climate change