Anbar: From Destruction to Sustainable Recovery

From the ashes of the massive economic destruction carried out by Daesh, Anbar Province is beginning to rise again. How will its recovery be sustainable? Well, the key to it all is improved security. 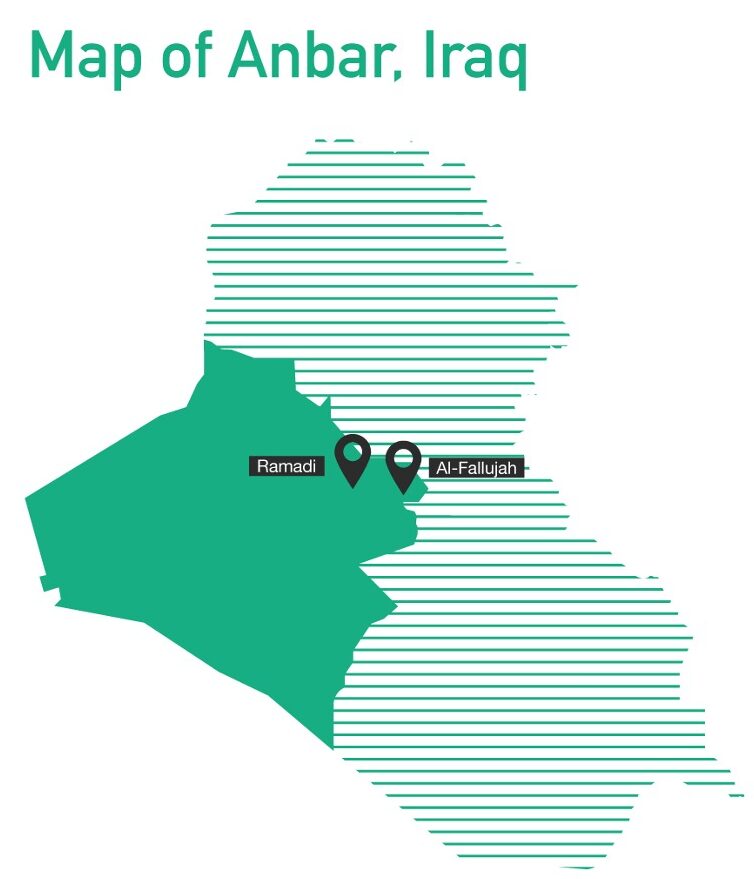 When the Iraqi Security Forces (ISF) supported by the Global Coalition liberated Anbar Province from Daesh in 2017, they found the cities of Ramadi and Fallujah devastated, and thousands of residents displaced. Much of the cities’ vital infrastructure lay in tatters, destroyed by Daesh’s scorched-earth policy as they fled into the desert. Today, despite Daesh’s impact on Anbar’s economic prosperity, the Iraqi authorities in partnership with international organisations have transformed this destruction into an opportunity for sustainable recovery and future growth – attracting over 150 projects worth two billion USD to restore infrastructure, modernise the agricultural sector and diversify Anbar’s energy sources.

In Ramadi, the Government of Iraq’s Reconstruction Fund for Areas Affected by Terrorist Operations recently repaired Ramadi Dam to restore water to the city’s residents and support the agricultural sector. Meanwhile in Fallujah during 2020, the United Nations Development Programme rebuilt the Fallujah Teaching Hospital, reopening the facility to provide essential care to the city’s 750,000 residents in the midst of the COVID-19 pandemic. 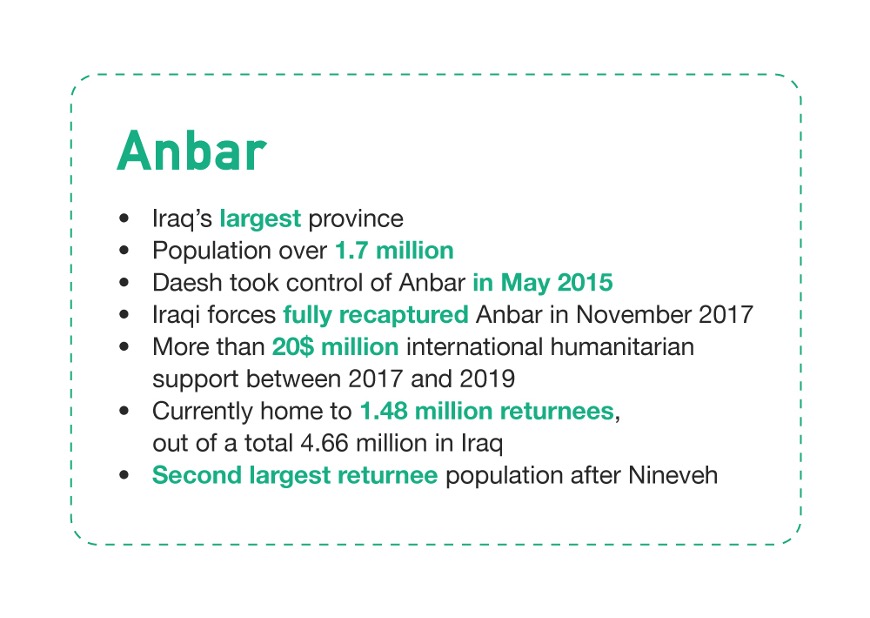 These reconstruction initiatives not only focus on restoring Anbar to its pre-Daesh state, but also seek to overcome some of the province’s longer-term economic challenges. Historically overly-reliant on fossil fuels, Anbar was left vulnerable to Daesh’s exploitation and suffered catastrophic fuel shortages during the group’s brutal occupation. Now, Anbar is diversifying its energy sources, with the Anbar Investment Commission and private sector donors recently completing Ramadi’s first solar panel project to provide electricity. By reducing the city’s dependence on generators – the cost of fuelling which is often prohibitive – such renewable energy initiatives can ease financial difficulties for low income families and IDPs returning to their homes, as well as pave the way for emerging industries to flourish.

Meanwhile in rural Anbar, the Government of Iraq’s Ministry of Planning – supported by German development agency GIZ – applied the same long-term thinking to their economic growth plan, focusing on modernising Anbar’s agricultural sector. Thus far, the initiative has repaired many kilometres of irrigation systems and donated hundreds of greenhouses to local farmers plus provided the training in how best to use them. In future the initiative will collaborate with the University of Anbar in southern Ramadi to provide agriculture and entrepreneurship courses to young Iraqis.

Anbar’s present day challenges stem from the destruction Daesh wrought across the province, first during their 2014 assault on its towns and villages and later during the group’s scorched-earth policy as they retreated in the face of the ISF and their Global Coalition partners.

Fallujah was among the first cities in Anbar to fall in 2014, resulting in a two-year occupation during whichDaesh encircled the city with landmines and IEDs, ransacked its historical and religious sites and turned schools into weapons depots. Meanwhile during Daesh’s year-long siege of the provincial capital Ramadi, the terrorists cut off electricity, plunging the city’s residents into darkness, preventing agricultural workers from harvesting their crops and halting the supply of goods and produce to the city’s market. When Daesh captured Ramadi in May 2015, almost half the city’s population fled, while those who remained were left without vital services. Daesh continued their destruction during their hasty retreat, destroying every bridge across the Euphrates River, booby-trapping electrical facilities and setting fire to farmland. However, this scorched earth policy backfired for Daesh. It inspired those involved in reconstruction to not only rebuild what had been destroyed but also to enhance and ‘build back better’ to strengthen the province’s economy for a more prosperous future.

Although Anbar still faces obstacles – not least the economic impact of the COVID-19 pandemic and ongoing security challenges in some of the more remote areas of the province – private and public sector commitment to reconstruction has established the firm foundations from which continued recovery and economic growth can continue. From the ashes of Daesh’s occupation a brighter future is emerging.

Analysis: Two years on from its territorial defeat, Daesh is degraded but still dangerous

The Engineer who Daesh could not stop