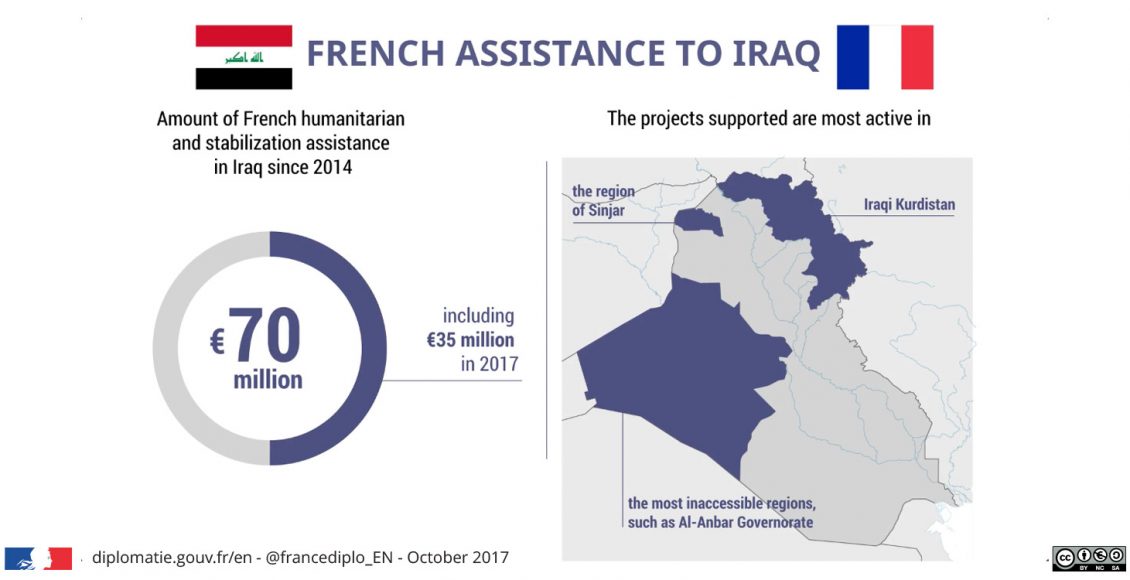 This series of victories reflects the courage of the authorities, fighters and people of Iraq in their efforts to tackle terrorism. Taking an active part in the Global Coalition’s efforts to dismantle Daesh militarily, France intends to stand by them until the entire territory of Iraq is liberated.

It is imperative to eradicate Daesh but the challenges that Iraq will then have to meet are considerable. Iraq is entering a phase of stabilization, national reconciliation and reconstruction of the liberated regions without which there will be no lasting victory against terrorism nor a return of displaced persons.

With its partners, France is pursuing its efforts and remains at the side of the Iraqi people and Government to rebuild the country, revitalize the economy and come to the aid of populations devastated by the conflict.

Since 2014, France’s humanitarian and stabilization assistance has amounted to €70 million including €35 million for 2017 alone, a portion of which will be specifically earmarked for the stabilization of Mosul.

When they visited Iraq on 26 August 2017, the Minister for Europe and Foreign Affairs, Jean-Yves Le Drian, and the Minister for the Armed Forces, Florence Parly, also confirmed the granting of a budgetary loan of €430 million to the Iraqi Government.

France likewise conducts its actions in the area of humanitarian and stabilization assistance through UN agencies such as the UNHCR and the WFP. It has contributed €3 million to the United Nations Development Programme (UNDP) in Iraq and in 2017 announced an additional contribution of €1 million to the Iraq Crisis Response and Resilience Programme (ICRRP) to support socio-economic recovery projects that are being implemented by French NGOs.

It is crucial to restore security so that displaced people can return freely and voluntarily and so that populations can return to their normal lives. France supports the training of Iraqi security forces and mine clearance actions.

All the projects conducted by France place special attention on the health of war-affected or exiled Iraqi people. Aside from emergency humanitarian assistance, France has implemented programmes to support health infrastructures (hospitals, health clinics in displaced people camps) and the restoration of water and sanitation networks to prevent the spread of disease and epidemics.

Education and support for displaced populations

Daesh’s violence has greatly endangered the education networks in the regions under the terrorist organization’s control. Moreover, a large number of children have been displaced by the conflict and are unable to attend school.

Education is a priority of France’s assistance

In 2015-2016, as part of humanitarian action, France supported the Bardarash Camp located near Mosul, which accommodates 12,000 displaced people, and helped to build two schools and educate an additional 1,000 students in the camp, among other things. In addition, the children benefited from psycho-social support in their social and educational development.

Following the liberation of the home villages of the displaced people in the Bardarash Camp, France supported programmes that have helped these people return to their villages.

A united Iraq respecting all its components is essential to further lasting and inclusive stabilization.

France created a support fund for the victims of ethnic and religious violence in the Middle East endowed with €10 million for 2017-2018. This fund finances projects led by NGOs aiming to respond specifically to the needs of these communities and to encourage their return to their home cities and villages. Iraq is by far the leading beneficiary country of this fund.

The ties between France and Iraq when it comes to preserving cultural heritage and archaeology are longstanding.

In recent years, three priorities have been identified in concert with the local authorities: combating all forms of trafficking, protecting works and safeguarding the memory of the sites. Several training actions for Iraqi professionals working in the preservation of cultural heritage were planned in partnership with the Institut National du Patrimoine (INP) and the Department of Near Eastern Antiquities at the Louvre Museum to improve techniques to combat the trafficking of cultural goods and objects.

The Institut Français du Proche-Orient (IFPO) in Iraq, with a branch in Erbil, established cooperation with academic institutions in the areas of archaeology and cultural heritage.

In 2018, the Institut Français de Recherche à l’Étranger (IFRE) plans to conduct several digitization and conservation projects on Iraqi sites with funds from the International Alliance for the Protection of Heritage in Conflict Areas (ALIPH).

France is resolutely committed to fighting impunity for crimes committed in Iraq and has taken every opportunity to take this issue forward, particularly in the Security Council and other UN bodies. It is funding projects to document the crimes committed to provide information for investigations. Training actions to improve the skills of Iraqi law enforcement authorities are also being conducted to make the prosecution of perpetrators of crimes more effective. France also provides its support to victims through a psycho-social assistance project.