Timeline: The fall of Daesh in Raqqa 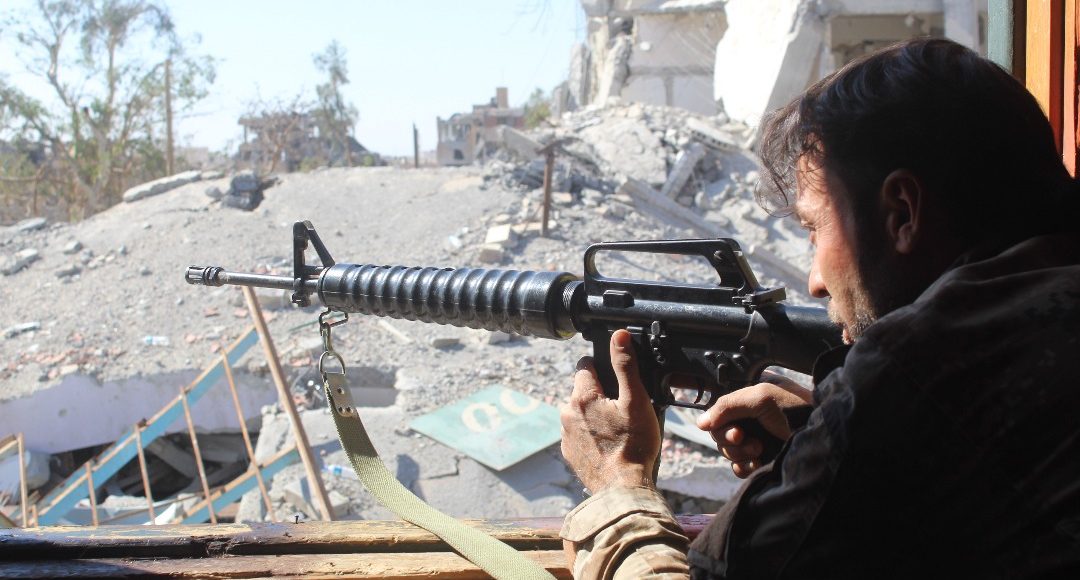 Raqqa is liberated after three years under Daesh rule

March 2013
In a popular uprising against the Assad regime in Syria, the city of Raqqa is captured by revolutionary forces, mainly from the Free Syrian Army (FSA).

April 2013
In an audio message, Abu Bakr al-Baghdadi announces the formation of a new extremist military organization (Daesh) that will fight in Iraq and Syria.

May 2013
Daesh fighters spread slowly across Raqqa Province and other areas, occupying towns and villages, and executing people publicly.

January-June 2014
Daesh arrests, kidnaps and assassinates many activists and FSA members involved in taking the city from the Assad regime in 2013.

June 2014
Daesh controls areas of west and northwest Iraq including Mosul. They commit genocide against Yezidis and massacre hundreds of unarmed Iraqi soldiers.

July 2014
Al-Baghdadi declares himself supreme leader of the territory Daesh controls and urges Muslims across the world to follow him and join Daesh.

August 2014
The United States begins airstrikes against Daesh in Iraq. Iraqi and Kurdish troops, supported by the US airstrikes, rescue thousands of Yezidis from Sinjar Mountain, northern Iraq.

September 2014
The Global Coalition against Daesh is formed to tackle the growing threat posed by the terror group. The Global Coalition currently includes 73 members, including 69 states and four international organisations, committed to degrade and defeat Daesh.

January 2015
Daesh suffers its first major humiliation in Syria, with defeat at Kobani (Ain Al Arab) in Syria. The Global Coalition conducts airstrikes against Daesh targets in the city and its countryside.

October 2015
The Syrian Democratic Forces (SDF), a coalition of Syrian Kurdish and Arab forces, is established to fight Daesh in Syria. The Global Coalition provides training, equipment and advice to the SDF and conducts airstrikes to help defeat Daesh.

August 2016
The SDF liberates Manbij, northern Aleppo, from Daesh. The Global Coalition against Daesh provides support to the SDF in its efforts to liberate the city.

November 2016
The SDF and partners including the Syrian Arab Coalition (SAC), launch Operation Wrath of Euphrates to defeat Daesh in Raqqa. The Global Coalition provides training to SDF and conducts airstrikes against Daesh targets throughout the operation.

June 2017
The SDF, with support from the Global Coalition, enters the eastern parts of Raqqa city.

July 2017
The SDF, with support from the Global Coalition, enters the Old City in Raqqa.

October 17, 2017
The SDF, with support from the Global Coalition, defeats Daesh in Raqqa and liberates the city.

September 2014 — ongoing
The Global Coalition facilitates humanitarian efforts to assist civilians adversely affected by Daesh’s brutal occupation in Iraq and Syria and the subsequent battle to gain their freedom. The Global Coalition and its partners remain united and committed to the lasting defeat of Daesh.

A new irrigation system in Ninevah