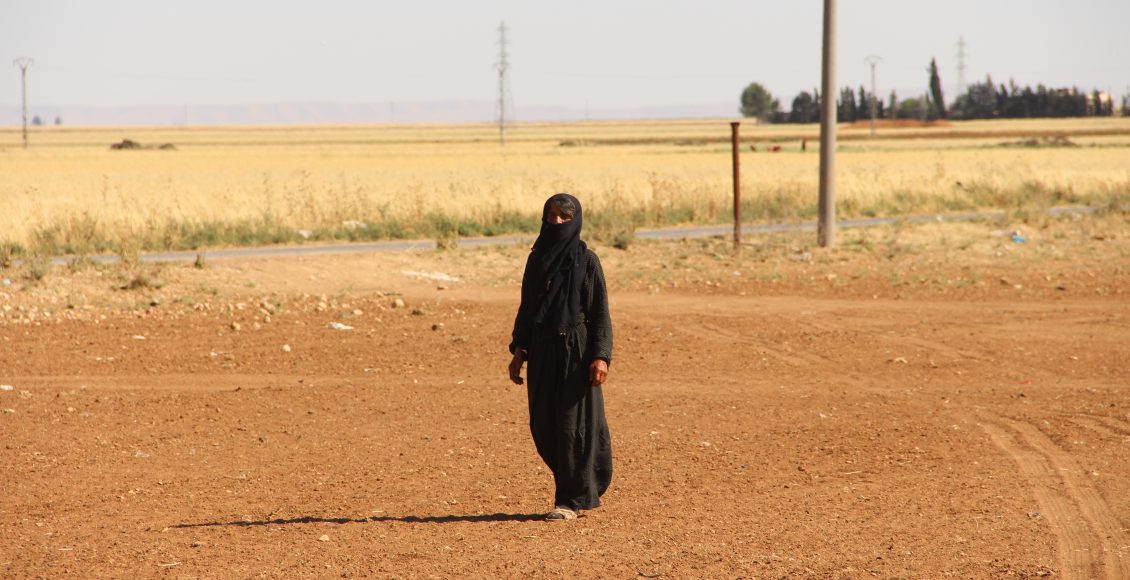 Bab al-Salameh IDP camp, Turkey – “Iftar [the traditional Muslim meal prepared for the breaking of the fast during Ramadan] is a family meal,” says Umm Ahmad as she is about to join a group of women for the occasion. “The whole family comes together for the feast,” she adds with profound sadness in her eyes. Like many other IDPs (Internally Displaced Persons) in Bab al-Salameh, Umm Ahmad lives alone. She does her best to fight loneliness by keeping busy and helping others. Umm Salem, her friend in the camp says that Umm Ahmad has a knack for volunteering. “She is a strong woman and has a gentle spirit, she wants to help people as much as she can,” her friend says. Indeed, Umm Ahmed speaks of rebuilding what was lost. In her case, this amounts to almost everything and everyone.

Just 50km to the southeast of Bab al-Salameh lies the city of al-Bab where Umm Ahmed comes from. Located in the Aleppo countryside, the city remained relatively peaceful until April 2012 when the Syrian regime started opening fire on protesters. Increased state violence convinced many locals to join insurgent groups and from there, the violence kept escalating. In July 2013, Daesh started conducting Da’wa (proselytising) activities in the town as part of the group’s westward expansion. By November of that year, Daesh was in full control of al-Bab. For Umm Ahmed, this marked the beginning of more than two years of tragic loss. 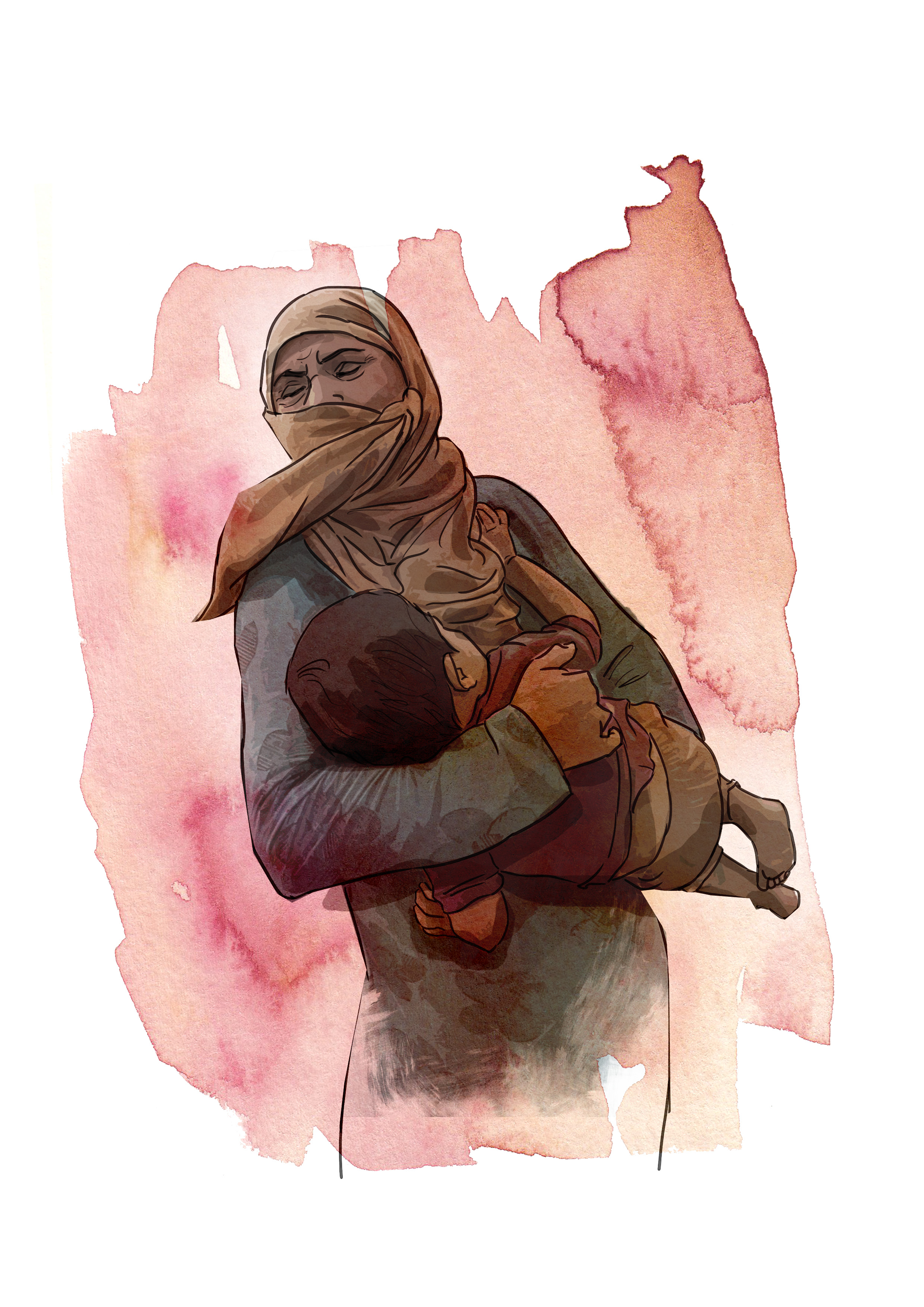 Umm Ahmed married Abdul Rahman before the war. Her husband was forced to join the Syrian armed forces just two months after the wedding. “We didn’t know that a war would break out and last this long,” the woman says. However, her husband was born with poor eyesight, a condition which only grew worse as he got older. By the time he was conscripted, Abdul Rahman was almost blind. As a result, he was assigned to an administrative role and never served in a fighting capacity. “Everyone who spent time with him knew he was a good man,” she recalls. But when Turkey announced its intention to launch an operation to retake the northern Aleppo countryside from Daesh, the group reacted pre-emptively by launching a campaign of random arrests. Many innocent civilians were put behind bars or forced to take Daesh’s religious courses. The less fortunate endured torture and in several cases, public execution. Unfortunately for him, Abdul Rahman’s past as a Syrian Army conscript played to his disadvantage. “They took my husband and accused him of spying for the regime,” says Umm Ahmad, bursting into tears. Seeing her unable to continue, her friend Umm Salem carries on: “Umm Ahmad was forced to attend her husband’s execution,” she explains. “As she couldn’t leave their baby to anyone, she had to carry him through the whole thing,” she adds.

In November 2016, al-Bab became the scene of several battles between Daesh and the regime which was advancing from the south. The battlefield was in flux with large areas changing hands in quick succession. It was around that time that Umm Ahmed decided to escape. Unfortunately for her, she would have to endure more horror before reaching Turkey. “Four months after my husband’s death, Daesh asked me to marry one of their foreign fighters,” she says, explaining that, “according to Islamic law, after four months, a widow’s bereavement is supposed to come to a close and she can come out of her solitude.” Daesh wanted Umm Ahmed to marry a Tunisian fighter who, the organisation said, would provide for her and her young son. The group claimed that the union had already received her father-in-law’s consent. Umm Ahmed knew this to be a lie as her father-in-law would never willingly agree to such a demand, having been arrested by Daesh and having had to attend his son’s execution as well. She only met her new husband twice. Her first encounter with the Tunisian man was during their wedding night. “He entered the room quite bluntly and treated me harshly, as if he was practicing some sort of sadistic ritual,” she says. “After that, he just left.” She met the man a second time later that month. “He came in and didn’t say much. He gave me some money for the baby, saying that it was his responsibility to provide for the child,” she says. Before he left, the foreign fighter asked a last thing of Umm Ahmed: “He asked me to pray for him to become a martyr.” Umm Ahmed pauses for a moment before concluding: “This I heartily did.” Her new husband was killed in battle later that night.

Umm Ahmed decided to leave with her child before Daesh would assign her a new husband. Her plan was to avoid main roads and head north through farmlands. This was a risky decision as Daesh had placed landmines in the entire area to delay the Free Syrian Army’s progression. “I travelled with a group of five women, two men and around twenty children,” she explains. “As I was so tired of carrying my son, the men found me an old horse so I wouldn’t have to walk the whole way.” Suddenly, the horse stepped on mine. “I was injured in the blast and my one-year-old fell from my arms,” she says, unable to control her tears. “He was gone.”

One can wonder how Umm Ahmed can still find an appetite for life after everything she has been through and after losing all her loved-ones. “The war and crazy men have taken away my family,” she says. Yet, she continues defiantly: “But I am still alive! I don’t know anything about my in-laws, but I am determined to find them and get them out there.” Umm Ahmad wants to rebuild a new life with them. “We will persevere and we will flourish again.” This is Umm Ahmad’s unwavering hope.

How Japan is combating public health emergencies in Iraq