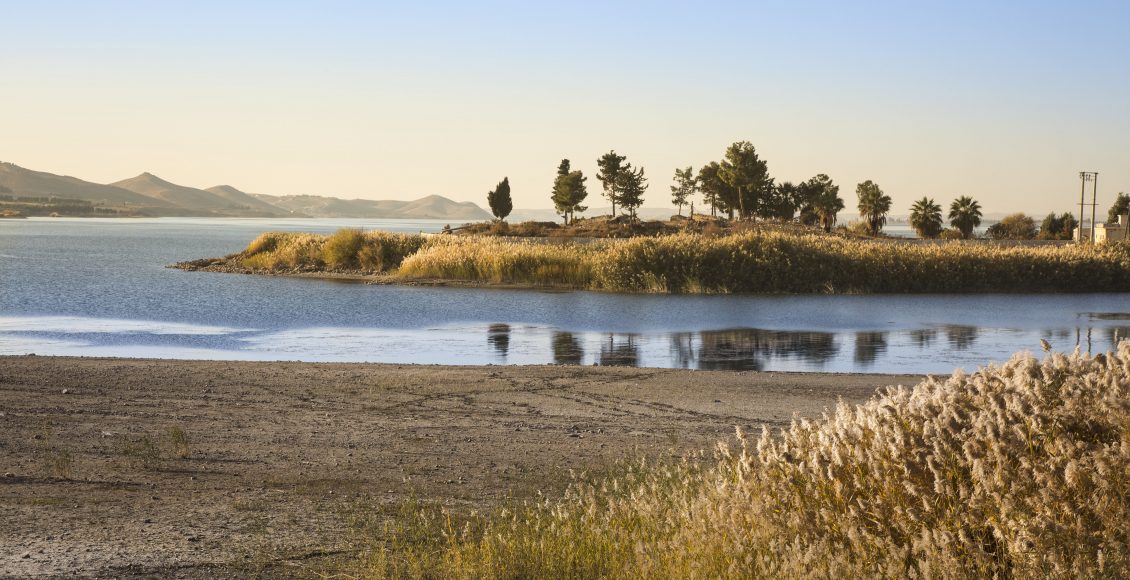 Suleiman Shah refugee camp, Turkish border town of Akcakale – The call to prayer is only an hour away, but Umm Rami still finds the time to talk about how she crossed into Turkey to flee Daesh’s rule. Her daughter Zahra, 15, is eagerly looking forward to Iftar (the traditional dinner celebrating the breaking of the fast during Ramadan). Suleiman Shah is now home to 30,000 Syrian refugees. Life can be austere in the camp and Umm Rami misses celebrating Ramadan in her Syrian home. There’s nothing quite like the happy chaos of a Syrian kitchen in the hours before Iftar, with everybody busying themselves, making sure there is enough food for the whole family and guests. “Eventhough our life is full of uncertainties, I now realise what we were missing during the war in Syria: safety” Umm Rami reflects. “I feel my daughter and I are finally safe,” she says.

Umm Rami, 58, comes from the Syrian town of al-Mayadeen on the banks of the Euphrates river, between Deir Ezzor and the Iraqi border. In late August 2012, most of the town was captured by the Free Syrian Army (FSA). Intense fighting ensued between the FSA and the regime (which was still holding an artillery base on a hill overlooking the city) and many locals joined the resistance. Umm’s only son, Rami, was one of them. Rami took part in the offensive against the regime but was killed in late 2012 when regime forces used heavy artillery against the FSA. With her husband having passed away a few years earlier, Zahra was the only direct family Umm Rami had left. Taking advantage of the chaos left by months of fighting, the al-Nusra extremist group took control of the city. Finally, Daesh captured al-Mayadeen in July 2014 as part of their Deir Ezzor offensive during which the group took control of the entire surrounding governorate. Life in the city was turned on its head. Daesh fighters were sweeping through the neighbourhoods, terrorising civilians and killing whoever dared to oppose them. Those who could fled the city. 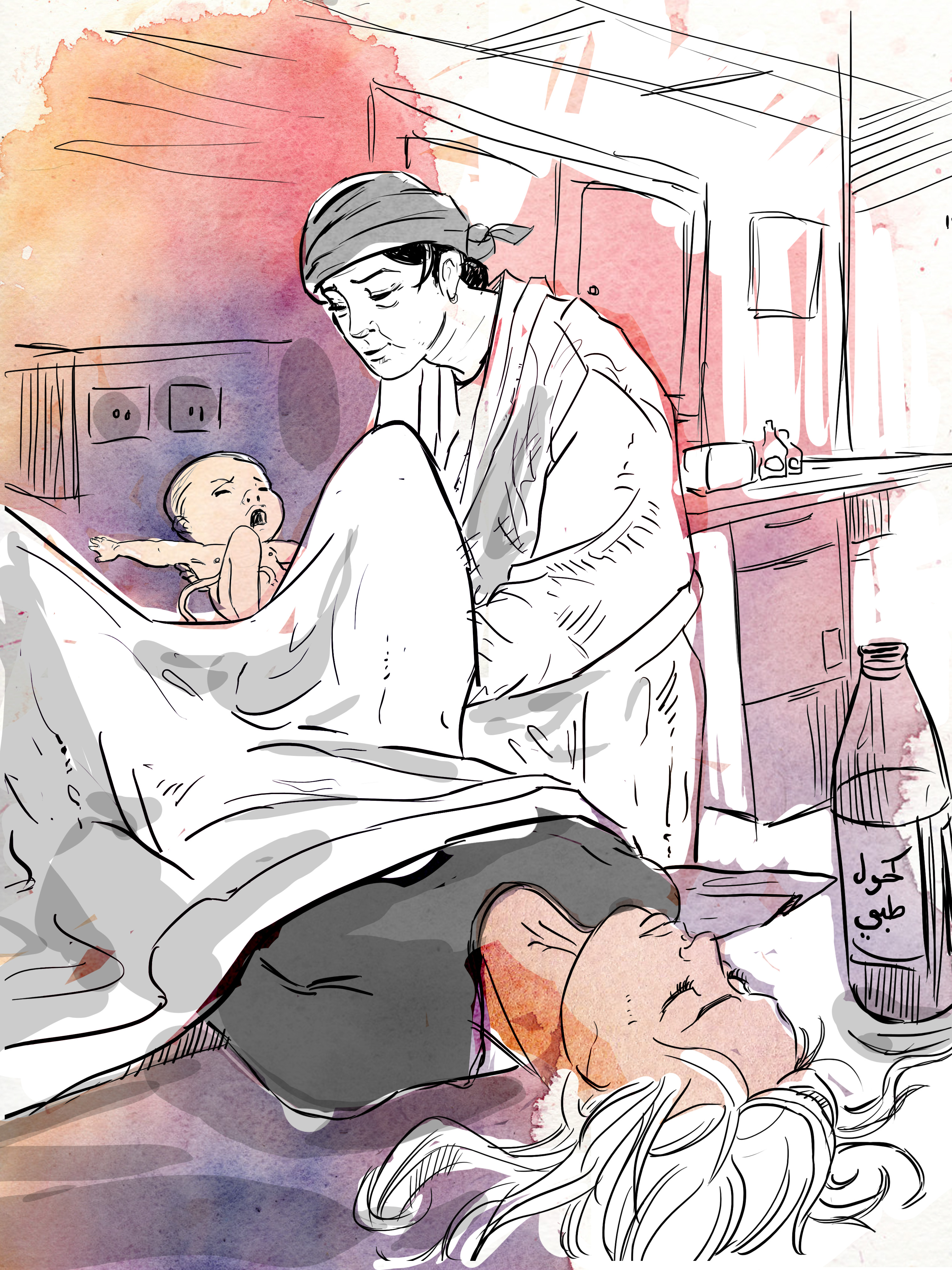 Although most of her relatives had already left the city by the time Daesh took over, Umm Rami was too old to escape. It would take her a whole year before she could cross into Turkey with Zahra. That year was the scariest time of her life. Because she was a midwife, a highly sought-after speciality, Umm Rami enjoyed relative safety but became also privy to the intimacy of Daesh’s families. “I was able to enter the homes of many Daesh fighters,” she explains. “It felt as if I was surrounded by deadly scorpions.”

Midwifery used to be a booming profession until the 1990s when the government expanded healthcare services to Syria’s more remote areas, putting many traditional midwives out of work. However, as Umm Rami explains, health services collapsed everywhere Daesh took over, including maternity. “Daesh sought to separate men from women in all aspects of life,” she explains. “This included hospitals where male doctors were no longer authorised to treat female patients, irrespective of the severity of their conditions,” she adds. All of a sudden, her skills were in high demand and it wasn’t long before Daesh asked her to cater to its fighters’ wives.

In early 2014, a member of Daesh knocked on Umm Rami’s door, asking her to come to his house immediately. The man’s wife was still in the early stages of her pregnancy but had started to bleed. She was from al-Mayadeen and had married the fighter five months earlier. “I was looking at a 16-year-old ‘child’,” says Umm Rami. “Early marriages were becoming less common in this part of Syria but Daesh revived the practice,” she adds. According to her, parents tend to offer their daughters in marriage willingly out of fear, despite being against it. Everybody knows that members of Daesh don’t take ‘no’ for an answer, so parents tend to act preemptively to avoid any aggravation. Despite Umm Rami’s best efforts, the 16-year-old’s body couldn’t cope with the strain induced by pregnancy and the midwife had to perform an abortion to save her life. “I was so scared during the procedure,” says Umm Rami,”because nothing would stop a sick psychopath like this man from punishing me if anything were to happen to his wife.”

Before she managed to escape, Umm Rami visited dozens of Daesh households. She recalls how dysfunctional most of these marriages were. “In almost every [Daesh] home I visited, I saw domestic violence and abuse, especially when the wife was an abducted Yazidi woman,” she reveals. “I spent my whole life visiting people’s homes, becoming privy to intimate details about their lives, but I had never seen such savagery against women.” According to her, another problem is the fact that members of Daesh seem to be paranoid about medication. Many of them are convinced that aid agencies are deliberately sending poisoned medicines – or medicines causing sterility – to Syria in order to counter Daesh. As a result, the group has been known to systematically destroy stocks of medicines or to ban their use. This attitude led to the avoidable death of one of Umm Rami’s patients whose husband forbade her to go to the only clinic in town for fear of the medication she could be given there. “Daesh men ask their wives to use makeup and perfume at home and to cater to their every desire; but when it comes their wellbeing and health, they’d rather use techniques from the middle ages,” she laments.

Being a direct witness to these wives’ condition made Umm Rami all too aware of what could happen to her 15-year old daughter. A plan began to form in her head. Her work allowed her to earn some money, which she started saving for her escape. She was also able to move more freely than other civilians as her work meant she had to travel to people’s houses. Finally, she decided to travel to the town  of al-Shaddadi which had been liberated by the Syrian Democratic Forces (SDF) in February 2016. The plan was to reach this town and then proceed to the Turkish border, 80km to the north. Just before reaching al-Shaddadi, Umm Rami was stopped at a Daesh checkpoint. “I felt this was the most critical moment of my life,” she recalls. “They asked me about my destination, so I showed them a paper signed by the Daesh emir of healthcare allowing me to go on visits to deliver medicinal herbs outside al-Mayadeen,” she says.“This was a decisive moment, but I wasn’t thinking of myself” she recalls with tears in her eyes. “I was only thinking about my daughter and about saving her from being forced into marriage with one of those Daesh fighters,” she says. “But we made it!”

Back at the Suleiman Shah refugee camp, Zahra is preparing Iftar with her mother and informs her that their neighbours would be waiting for them to break fast at the camp’s public area. Ramadan is a time for solidarity and this is particularly true amongst Syrian refugees living in the camp. “The way people are helping one another in the camp during this Ramadan makes me hopeful,” she says. “It makes me think that good time might be ahead.” Zahra will go to high school next year. She won’t have to marry a Daesh fighter. Instead, she is dreaming of studying at one of Istanbul’s prestigious universities.

Full Transcript of Media Q & A with Major General Jones

The EU’s contribution in Iraq