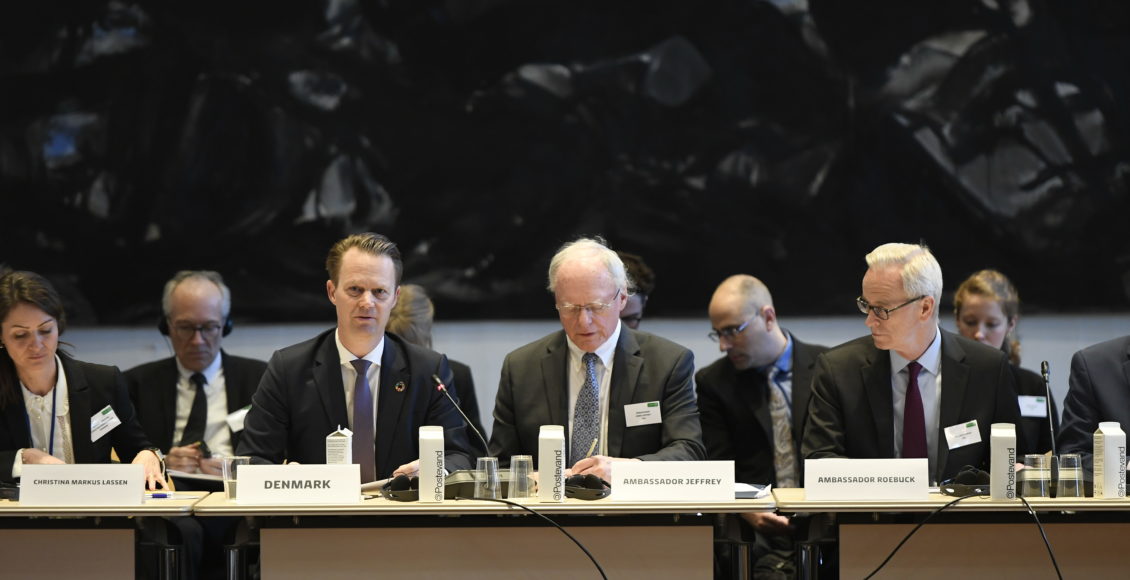 At the invitation of Danish Minister of Foreign Affairs Jeppe Kofod, the Political Directors of the Global Coalition to Defeat Daesh Small Group met today in Copenhagen to reaffirm our shared determination to continue the fight against Daesh in Iraq and Syria, and to create conditions for an enduring defeat of the terrorist group through a comprehensive, multifaceted effort. International law, including international humanitarian law and the protection of civilians and international human rights law, as well as relevant UN Security Council resolutions, must be upheld under any circumstances.

The Political Directors agreed to strengthen cooperation across all lines of effort in order to ensure that Daesh and its affiliates are unable to reconstitute any territorial enclave or threaten our homelands, people, and interests.

Daesh no longer controls territory and almost 8 million people have been freed from its control in Iraq and Syria. Nevertheless, Daesh is adapting its methods to the situation as it evolves and hopes to use regional instabilities as an opportunity to conduct attacks and reemerge in Iraq and in Syria, as well as where Daesh branches and networks exist elsewhere. Territorial defeat has been achieved, but all members of the Coalition acknowledge that the job to ensure a lasting defeat of Daesh remains. We will continue our efforts until the job is done.

It is critically important to maintain and allocate adequate resources to sustain Coalition efforts against Daesh in Iraq and Syria, including providing support to legitimate partner forces, to best safeguard our collective security interests. The Coalition will continue to further develop its support to and close partnership with the Iraqi government, the Iraqi Security Forces, and our partners in the region in their ongoing efforts to diminish Daesh’s capabilities and ensure it cannot reemerge.

We must continue to increase our various forms of assistance and stabilization support to liberated areas. In Iraq, the Coalition remains committed to working with the government and the Iraqi people to build a safe, stable, and prosperous country in full respect of Iraqi sovereignty. We will continue the close dialogue with the Iraqi government on appropriate measures to adapt the operational efficiency and coordination of our collective efforts to defeat Daesh. In Syria, the Coalition stands with the Syrian people in support of a lasting political settlement based on UN Security Council Resolution 2254.

The Coalition must continue to be vigilant against the threats of terrorism in all its forms and manifestations, to maintain the progress achieved by the Global Coalition to defeat Daesh, to act together against any threats to this outcome and avoid security vacuums in the region that Daesh may exploit. The Coalition must be prepared for the challenges posed by Daesh, which will include plans for a meeting focused on how to support ongoing international efforts in West Africa and the Sahel in 2020. In this context, the Global Coalition must remain vigilant and work against the threat of Daesh around the world, upon the request or prior consent of the country or state in which a Daesh branch or network exists, and while fully respecting international law.

The Political Directors reaffirmed their belief that this comprehensive effort is necessary to achieve a full and enduring defeat of Daesh worldwide. The Global Coalition to Defeat Daesh has proven that it is a cohesive, adaptable vehicle that has sustained this important endeavor through stabilization, political, military and law enforcement lines of effort. The Coalition’s members, its four working groups, the political-military consultations, and Coalition implementing platforms have put together a unique mix of military and civilian expertise focused on ensuring the enduring defeat of Daesh and will continue its efforts to limit the threat of Daesh and its branches and networks. The Political Directors also welcomed the announcement that the next meeting of the foreign ministers of the entire Global Coalition will take place in Italy this spring.