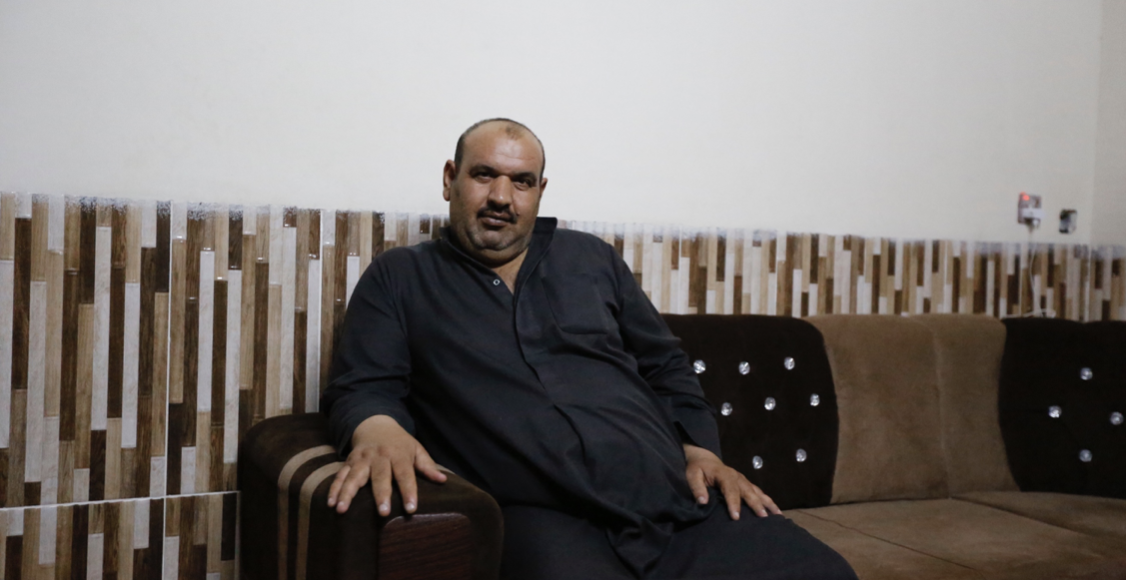 ”When Daesh militants entered our school for the first time in July 2014, they ordered us to take the Iraqi flag down and hoist their flag,” says Fallah. “I objected and told them that hoisting the Daesh flag on our school would make it a target for warplanes and that the school children are innocent and have nothing to do with this.”

His protests were ignored and the Daesh flag was raised.

Due to Daesh’s presence, the Iraqi Ministry of Education decided not to recognize the results of the school year in Daesh-controlled areas, because of insecurity in the area and inability to monitor exams. This prompted many local headmasters to leave their schools and go to safe cities.

Fallah decided to stay in Al-Sufrah for his students and did so for several months. Eventually, during a trip to the Education Directorate in Hawija for a routine mail pick-up, his mind was changed and he decided it was time to leave.

“Daesh had printed new curricula and textbooks,” he says. “At that moment I decided to close the school and flee my area.  I was not ready to participate in poisoning the brains of schoolchildren with Daesh’s extremist curricula. Before then, I thought that what was happening was only temporary.”

On his way back from the Education Directorate, Fallah called his supervisor, telling him he could no longer stay in the village.

“He advised me to protect the school’s official logs before leaving,” says Fallah. “We decided to bury them in the ground.”.

Hiding the school’s official logs took three days. Fallah had to dig a hole in the ground at night to avoid Daesh suspicion, which he managed to do on the first night. On the second night, he placed an old fridge in the hole. On the third, he wrapped the school logs and records in nylon covers and put them inside the fridge. He covered the fridge with soil and threw some broken desks on top, so that the hole would not attract attention.

“I thought about the future of my children if Daesh arrested me, while I was burying the school’s official records and logs, and what would happen if Daesh found them” says Fallah of the process of burying the information. He knew not only would he be arrested, but he would also be executed in front of his family.

Fallah described his feelings when he was driving his car to leave his village and heading to Kirkuk on a rainy night at the beginning of February 2015.

“I thought about the school logs and records I had buried in the ground, the school for which I had been headmaster for 20 years, and my village that I left against my will,” he says. “I had already sent my wife and five children to Kirkuk before I left. I was eager to meet them after being apart for two months. I had all those thoughts in my mind in addition to a mixture of feelings of fear, eagerness and anxiety while I was driving away from my village.”

In Kirkuk, Fallah started working again and became headmaster of a school for internally displaced persons (IDPs). When Hawija and its nearby villages were liberated from Daesh, Fallah decided to return to his school, because it was the only high school for all the villages in the area extending from Al-Riadh to Makhool. In the academic year 2013-2014, the total number of the school students reached 650. Restoring school attendance at Al-Rasheed was part of normalizing life in the area.

Fallah confirmed that the first thing he did when he reached his village was to go back to his school.

“I went to find the school’s buried logs and records,” he says. “When I saw the broken desks in their place, I felt reassured that nobody had discovered the place. However, I still had concerns that the logs and records might have been damaged due to the rain of two winters. I could not describe my happiness when I brought the buried logs and records out and found out that they were in good condition. That moment I realized that I saved the future of the students that could otherwise have been wasted because of Daesh. I felt as if I had won a victory over Daesh.”

Fallah received praise from the Minister of Education’s office, which posted on its Facebook page Fallah’s photos of taking the school’s logs and documents out from the hole.

“I have not done this work to receive thanks and praise,” he says. “That was my duty for my work and my students”.