Between 2014 and 2019, Poland supported the whole Middle East region with a total amount of $51 million USD, providing necessary humanitarian aid to civilian populations.

In Iraq, the most vital issue is to rebuild homes, revive the local market, and restore normal life. That is why when, at the request from the Iraqi government and with support from the Global Coalition to Defeat Daesh, Poland became involved in the financing of a financial instrument to stabilise Iraq that was founded in June 2015 as part of the United Nations Development Programme (UNDP).

In 2020, they took the decision to reorient the activities of the Polish development and humanitarian assistance programme towards the fight against the Covid-19 pandemic. Our military contingent in Iraq facilitated a delivery of 50,000 protective face masks and 1 ton of sanitizers to Iraq’s health authorities.

In Iraqi Kurdistan Poland have been providing basic health services, shelter, water and emergency response. Those in need are reached by, among others, the Polish Medical Mission (PMM), which provides medical support to the inhabitants of the Harsham, Baharka and Qoshtapa camps. Within two years an estimated 17,000 inhabitants of the camps and surrounding towns will benefit from PMM’s activities.

Aid activities of the Club of Catholic Intelligentsia (KIK) address health consequences experienced by the victims of protracted conflicts in Iraq. They provide rehabilitation services, a mobile clinic team reaching the villages of Sharya, Balqos, Sina and Garshin, and the stationary clinic in the Dawoodia camp, almost entirely inhabited by Yazidis.

The Covid-19 pandemic hindered the delivery of medical aid. In response, KIK and its local partner STEP-IN taught basic coronavirus prevention tips such as social distancing, avoiding mass gatherings, or observing hygiene rules. As part of delivering healthcare, both organisations also care for the most vulnerable IDPs, including those who suffer from chronic diseases who are at higher risk of contracting the coronavirus. In order to lower the risk of the pandemic spread, KIK launched the production of reusable masks. Thirty seven women from the Dawoodia camp and the village of Sharya, where medical clinics operate, were employed. The initiative attracted much of the local community’s attention. The women received training, necessary equipment and materials to accomplish the task. 20,000 masks were distributed throughout the Dawoodia camp and the village of Sharya.

Poland supported the people of Syria through multilateral channels by contributions to the United Nations agencies and European Union, as well as to International Committee of the Red Cross.

The Embassy of the Republic of Poland in Damascus has run projects supporting local communities in Aleppo, Jaramana, Kafroun, Medaani, East Ghouta, Homs and Tartous. The projects focus on helping the most vulnerable, among them internally displaced people (IDP’s). In cooperation with local partners, the projects have been providing vocational courses and psychological support. The aim is to reduce poverty and to improve health care services, the quality of education and vocational training.

Thanks to Polish Aid support, the NGO Polish Center for International Aid, in cooperation with UNHCR, provided 500 refugee housing units to IDPs in Syria and Syrian refugees in Jordan.

In 2016, the Polish Military Contingent (PMC) began its participation in the Global Coalition to Defeat Daesh. The major purpose of deploying this contingent was advising, training, and assisting Iraq’s Special and Security Forces to build their capacity to defeat Daesh and providing security and stabilisation in Iraq. PMC’s personnel limit is up to 350 soldiers and civilians. 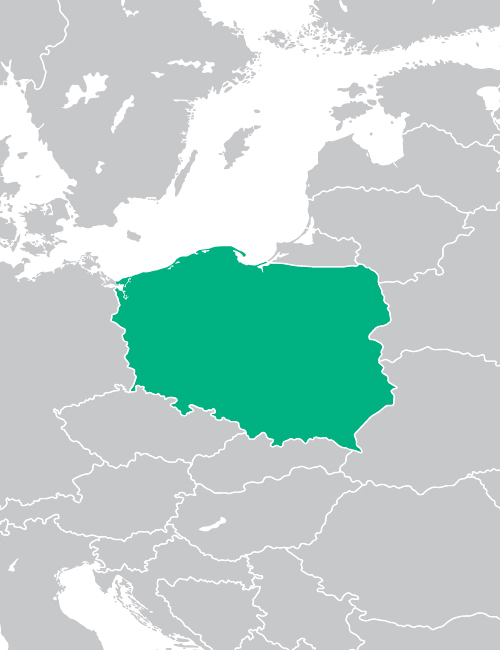