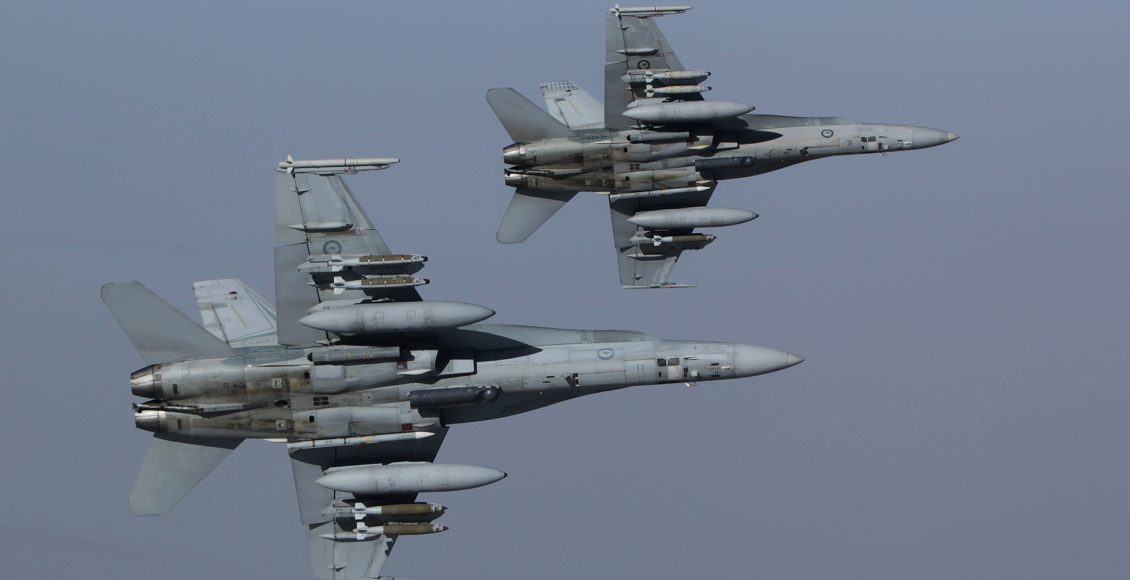 Two of the RAAF’s Air Task Group's (ATG) F/A-18A Hornets peel away from the RAAF KC-30A tanker whilst returning to base after striking a Daesh Armoured Personnel Carrier in Syria.

The Coalition advises and assists the Iraqi government as it plans and executes ground operations against Daesh, training and equipping Iraqi Security Forces and appropriately vetted Syrian opposition forces, and supporting them through air operations in their campaign to defeat Daesh.

Coalition airstrikes have degraded Daesh’s capabilities, limiting their freedom of movement, constraining their ability to reinforce their fighters, destroying their infrastructure, reducing their ability to generate financial support and impeding their command and control. To date, the Coalition has conducted more than 13,500 air strikes in both Iraq and Syria. As of the early July 2016, more than 11,500 artillery strikes from Turkey hit over one thousand Daesh targets in northern Syria.

Daesh has not been able to mount a major ground operation and achieve a major battlefield success in Iraq in over a year. The Coalition’s combined air operations have eliminated key Daesh leaders and provided cover for local ground forces to steadily reclaim territory from Daesh.  It has already lost nearly 50 percent of its territory in Iraq, about 20 percent of its territory in Syria, and is continuing to shrink. Major towns in Iraq, such as Ramadi, Sinjar, Fallujah, Hit and Rutbah have been wrested from Daesh’s control. The Turkish-Syrian border is now almost closed to Daesh, after Syrian Arab Coalition forces surrounded and entered Manbij, a major logistics hub for Daesh, while advancing south towards Raqqa and Deir az-Zour after taking Tishreen Dam and Shaddadi.  Moderate Syrian opposition forces, with Coalition air and artillery support, have also kept the pressure on Daesh, pushing east from the vicinity of Mara’a in Eastern Aleppo Province.

On the ground, the Coalition’s significant contributions of resources, equipment, and personnel to the Counter-Daesh military effort have played an essential role enabling recent successes.

18 Coalition partners have contributed personnel to “advise and assist” and training missions in Iraq.  Through these efforts, the Coalition has trained over 30,000 Iraqi forces now carrying out major operations against Daesh on multiple fronts using the weapons and munitions donated by Coalition partners. Iraqi Counter Terrorism Service units have spearheaded successful ground operations against Daesh in Ramadi, Hit, Fallujah and many other locations.

The Coalition is training approximately 900 Iraqi police each month.  Since June 2015 around 3,900 Iraqi policemen (70% local police, 30% federal police) have been trained. In line with the commitment made in Rome, the Coalition aims to nearly triple this number by October 2016. There are currently 148 Coalition police trainers in Iraq or committed to joining the effort.  As shown by their heroic efforts in Ramadi and other liberated communities, Iraq’s police have played a vital role repelling Daesh’s counterattacks and establishing a safe environment for the return of displaced residents.

Overall, the Coalition’s success in pressuring from the air and on the ground is showing results. Recent estimates suggests the number of Daesh’s fighters is down from approximately 33,000 in December 2014, to between 18,000-22,000 – the lowest assessed number since rigorous assessments began in late 2014.  Daesh’s resource base is drying up as Coalition strikes have significantly damaged their oil production and destroyed tens of millions of dollars of their cash reserves stored in bank vaults and other locations. Fighter pay has been cut by half in some areas and desertions are increasing.

Where Iraq and Syria meet: how Coalition partners fortify the border

The women empowering next generation after Daesh

The school empowering the next generation post Daesh p1