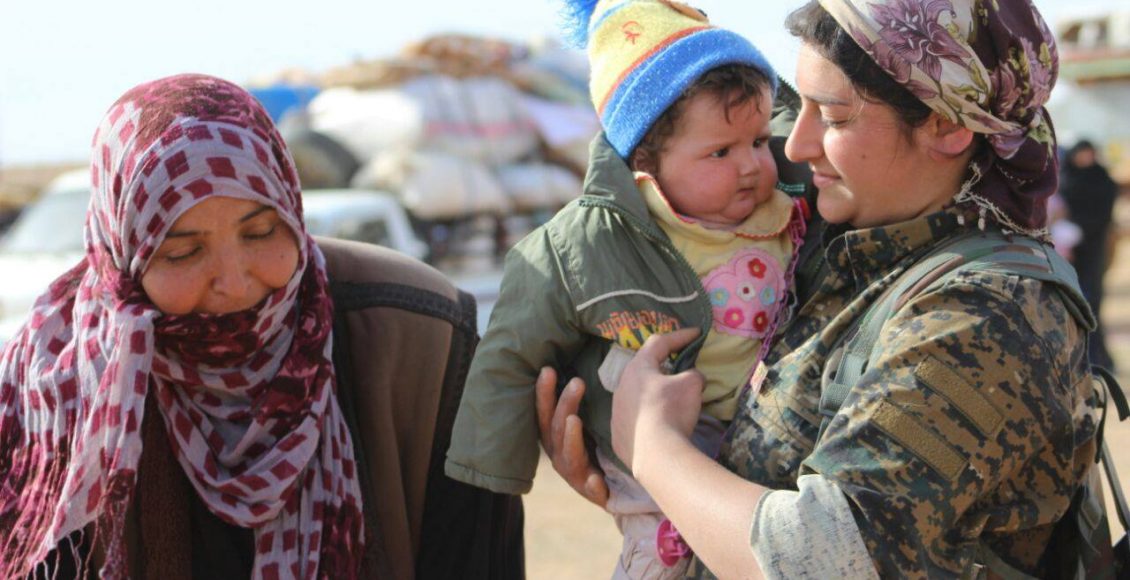 A QSD female fighter holds an IDP's baby in Tabqa

In mid April, large numbers of families have fled the city of Raqqa heading east, apparently for Dayr al-Zawr and its outskirts.  Most of these families came from the northern parts of Raqqa, where clashes with the Syrian Democratic Forces (SDF) pose the greatest threat. Daesh generally stops those who try to flee its territory, with varying levels of success.

Daesh has erected checkpoints across primary, secondary, and even cramped neighbourhood streets, either to reassert a sense of control or to stop people from fleeing.  Also, on 22 April, Daesh closed down three of the main arteries in southern Raqqa—Jisr, Jadeed, and Ma’amil—officially due to the risk to civilians from air strikes.  Whilst some of its officials may be worried about civilian safety, Daesh has historically preferred to use civilian deaths for messaging purposes, putting them intentionally at risk by massing them around military targets. With this in mind, Daesh is likely to use air strikes as an excuse to keep civilians in Raqqa by shutting down key infrastructure. Despite these developments, the largest issue appears to be the creation of a Daesh enclave in the province of Dayr al-Zawr Province, which might become its last bastion of control in the whole of Syria.

Last month, Daesh confiscated homes from those who had recently fled the city of Taqba, trying to escape the conflict.  Whilst Daesh probably cannot exploit these homes commercially, the organisation proceeded to convert them into command centres and depots for the street fighting expected to occur in the city. As residents continue to flee, Daesh is likely to pursue this course of action in order to confuse intelligence gathering on legitimate Daesh targets in the city. This trend seems to be confirmed by the fact that Daesh recently ordered residents to remain in their homes by declaring a large portion of western Tabqa a combat zone.

Timeline of liberating Raqqa from Daesh

Back to school in Baashiqa

Joint Communiqué by Ministers of the Global Coalition to Defeat ISIS