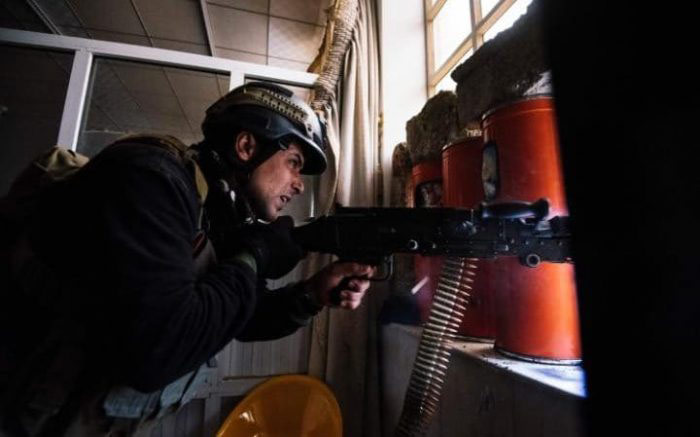 The technical college at Mosul University, newly liberated from the control of the jihadist group in an intense weekend of fighting, now serves as a firing position onto nearby Islamic State of Iraq and the Levant (Isil) hideouts as Iraqi forces attempt to take the east bank of the Tigris.

In another building, Isil militants had turned a dormitory into a makeshift chemical weapons factory, after raiding chemical stores in the College of Sciences. Soldiers were unable to enter and specialist engineers had been called in to neutralise any potential dangers posed by the chemicals.

Some of the materials the jihadists had taken from the research laboratories included radioactive materials, the United Nations has claimed.

When The Daily Telegraph visited the site yesterday, trees that lined the once green campus had been turned grey with dust, and many of the buildings were reduced to heaps of rubble. Ransacked classrooms showed further evidence of being used by the group, with Isil slogans scrawled across the walls and beds lying unmade.

The university, formerly one of the largest in the Middle East, had been turned into a local headquarters by the jihadists, and Iraqi officers believe they have been using it to train fighters.

Click here to read the rest of the article

Police officers putting graffiti on walls? Read on to see how one city in Iraq is…