This week, Daesh focused on increasing its religious activities and shari’a implementation, likely to distract from continued territorial losses in Syria and Iraq, including at Dabiq.

On 16 October, Daesh issued a new ruling requiring all buses operating in Raqqa City to place a physical barrier separating sections for male and female passengers, in order to prevent men and women from interacting as much as possible.

In Dayr al-Zawr province, sub-sources reported that Daesh banned the ‘aqal (common headwear, especially in the Gulf states and tribal regions) and football jerseys, saying that these “non-Arabic” types of clothing are not Sunnah (part of the customs of the Prophet and his Companions).

By contrast, Daesh lowered fighters’ wages to $35 (£28.70) in Tabqa City. Further, it is odd that Daesh plans to give a prize advertised in Syrian pounds given its stated goal of introducing its own official coinage in Raqqa City (i.e. gold dinars, silver dirhams, and copper fils). 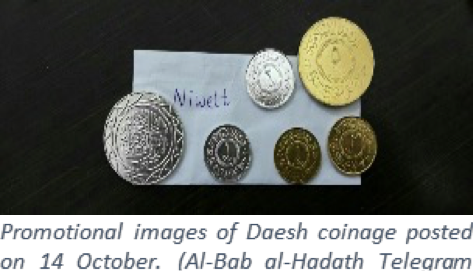