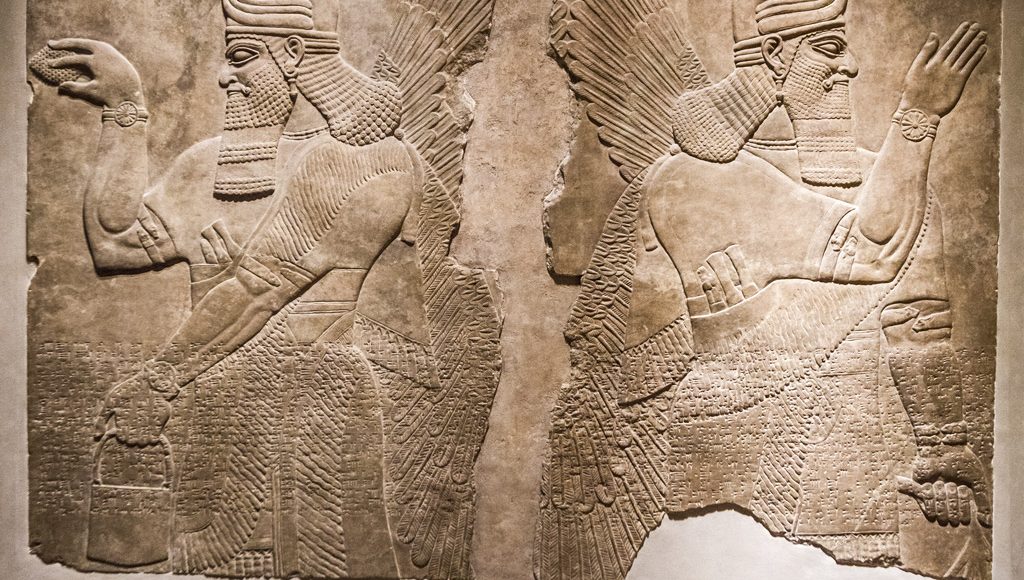 On 12 November this year, Iraqi Forces liberated Nimrud from Daesh as part of the campaign to retake Mosul. Nimrud was a major Assyrian city between approximately 1350 BC and 610 BC, and one of Iraq’s major archaeological treasures. It was an archaeological site between 1845 and 1879 and again since 1949.

In April 2015, Daesh released a video that shows that the terrorist group had been systematically destroying the cultural artifacts of the city. This followed a pattern of destruction in other cities in their sweeping 2014 campaign that saw them establishing their so-called caliphate in large parts of Iraq and Syria. Archaeologist Layla Salih, who fell in love with the site at the age of 14 and who used to be part of the team maintaining the site, was devastated when she saw the havoc Daesh had wrecked in the city.  She told NPR:  “I try to keep my tears,” she said, but she was weeping too much to speak. “So sad – yeah – speechless.”

National Geographic explains Daesh’s destruction of cultural heritage as their way of establishing their legitimacy as the proper heirs to the legacy of earlier “destroyers of idols,” including the prophets Abraham and Muhammed. National Geographic quotes a Daesh member claiming that the destruction is motivated by religion: “We were ordered by our prophet to take down idols and destroy them,” and “These ruins that are behind me, they are idols and statues that people in the past used to worship instead of Allah.”

However, these religious claims might not be entirely sincere. Other reports suggest that Daesh has been selling artifacts to finance their activities in Syria and northern Iraq, leading to the UN Security Council banning any trade in antiquities with Daesh in February 2015.

According to ASOR’s (American Schools of Oriental Research) Cultural Heritage Initiatives, a joint effort of ASOR and coalition partner US, hundreds of significant cultural sites have been destroyed since 2011 in Syria and northern Iraq.

These acts of cultural cleansing were denounced by the Director-General of UNESCO. “These destructions may amount to a war crime and UNESCO will do everything in its power to document the damage so that these attacks do not go unpunished,” said Ms Bokova.

Work is underway on the ground to provide assessment in the coming weeks and UNESCO will intensify its actions in the framework of its Emergency Action Plan in Iraq. UNESCO is also reinforcing educational activities within the #unite4heritage campaign in camps for internally displaced persons in Erbil – and schools in Baghdad – , to raise awareness on the need to protect cultural heritage.

In December, the international conference for the “Safety of cultural patrimony in conflict areas” took place in Abu Dhabi, under the joint patronage of UNESCO, the UAE Crown Prince and the President of France. In 2015, UNESCO adopted a global strategy for the protection of culture during armed conflicts – and also set up a fund to prevent destruction and rebuild where possible. In addition, France pledged 3 million euros. The French President described the scheme as the “cultural counterpart of the military and political fight against terrorism.”

Within the Coalition, the Counter Daesh Financing Group, co-chaired by Italy, Saudi-Arabia and the US, works on disrupting the smuggling of antiquities. It works with members of the Coalition to engage law enforcement and art collectors around the world –   and encourage greater vigilance in tracking and stopping the sale of cultural artifacts looted and sold by Daesh.

Other efforts to raise awareness of the damage done by Daesh include the reconstruction of the monumental Roman arch in Palmyra.  A 3D model was created by experts from Oxford’s Institute of Digital Archeology (IDA) and a new structure was built in Italy using Egyptian marble and was displayed in various cities across the world, including London, Venice, Dubai and New York. IDA ultimately intends to return the Arch to Palmyra.